Shirtless Russian On Horse Has Yoooge Boner For Donald Trump 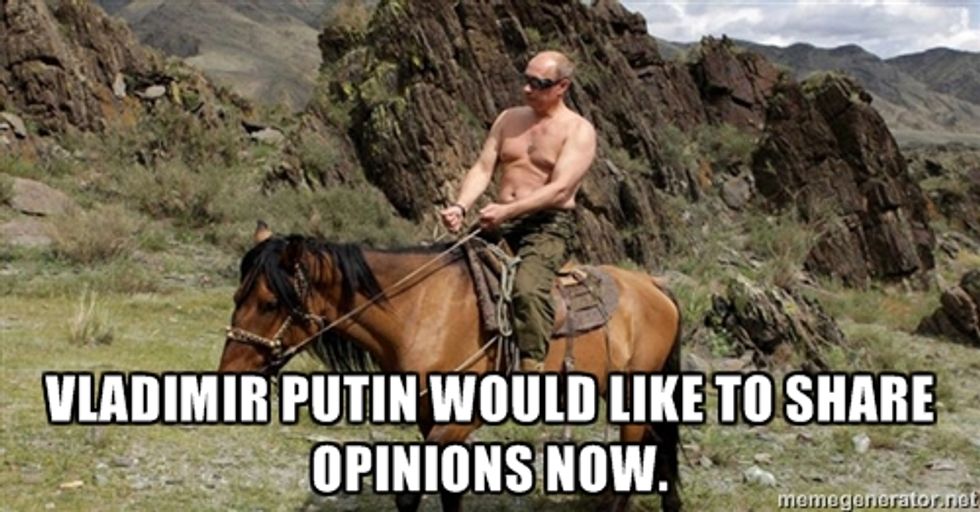 Vladimir Putin knows of sexy, for he is sexiest man in all of universe. And he have opinion to share on American presidential election:

It wasn't quite an endorsement, but Russian President Vladimir Putin has praised Donald Trump's talents and lauded his calls for better ties with Russia.

Speaking to journalists after his annual news conference on Thursday, Putin called Trump an "absolute front-runner" in the presidential race and a "bright and talented person." He added that he "certainly welcomes" Trump's calls for better U.S.-Russia ties.

Putin had said earlier he was ready to work with the eventual winner in the presidential race. And Trump has said he could work with the Russian leader..

[contextly_sidebar id="bFi3U6nXKXJPLEvy0BHL1cN9FDaomw8E"]All of Vladimir's favorite candidates have either dropped out of sky like Malaysian airplane (бу-гы-га-га!, which is Russian for your failed American "LOL!") or were not running in first place. Scott Walker? Nyet. Will never fulfill promise to destroy Russia like common labor union. Your Alaskan mountain wench Sarah Palin has expressed desire to romance Vladimir on submarine in Bering Strait, but she is not in race either. Palin probably busy making sex to blonde French shlyukha right now anyway, sad Russian bear face.

[contextly_sidebar id="tPb6ebTA39eOA8B78RY3R7JBqjjiMSjM"]Dropping the Vladimir-speak now (which we cannot do as good as Wonkette's Gary, all hail Gary!), maybe it's because Putin's a really unsavory character with designs on reconstituting Russia as a world superpower, and it REALLY helps him out if the American president is a fucking buffoon who steps on his own dick every five minutes, and thus loses the respect of the entire world. Vladimir Putin will look very nice in comparison, eh?

You might recall during the 36,000th Republican debate back in November, Donald Trump talked about how he and Vlad are old buds, on account of that time they both appeared on the same episode of "60 Minutes." Carly Fiorina claimed she was MUCH tighter with Putin, but, as with most things that fall out of Carly's mouth, that was a lie.

Nonetheless, in that debate, Trump was pretty confident he and Putin would Make Russo-American Relations Great Again:

It'll be terrific. They can build beautiful, gold-plated walls around themselves and compliment their own sex nipples, to each other.