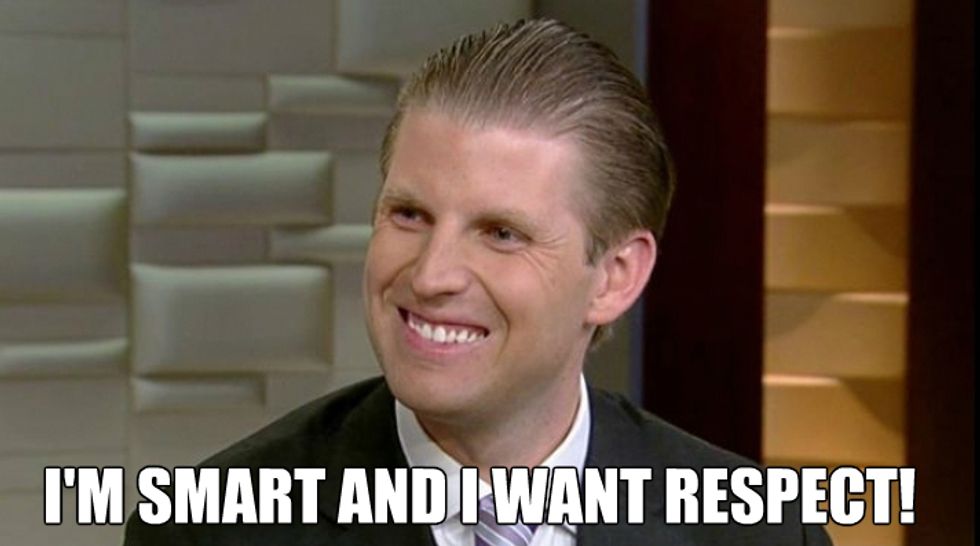 In yet another well-documented Fake News Hit Piece based on publicly available records, we learn from the socialists at the business magazine Forbes that, like his daddy, Eric Trump has a charitable foundation that seems awfully good at funneling a surprising portion of donor money toward Trump-owned businesses. We should've warned you to sit down, huh? But here's the really sad part: Eric Trump actually had pretty decent goals for the foundation during its first years, but as time went by, Trump pere realized he wasn't making any money off the charity, so he made some improvements to steer more of the Eric Trump Foundation's cash away from its intended beneficiaries, moocher kids with cancer, and toward padding the profits of the Trump Organization.

This doesn't come as a complete surprise -- how could it? -- since last September the Daily Beast also reported that a fair chunk of Eric Trump Foundation money makes its way into Trump-owned businesses, just like campaign funds, other "charitable" donations, and Your Tax Dollars do.

Eric Trump is awfully proud of the great job his foundation does in raising money for the St. Jude Children's Research Hospital in Memphis, telling Forbes reporter Dan Alexander that the foundation's annual golf tournament could raise money far more efficiently than most big charity events, because the Trump National Golf Club -- that would be the one in Westchester County, New York -- comes free of charge to the charity, which really has raised millions for St. Jude over the years. "We get to use our assets 100% free of charge," little Eric said like a grown-up grifter, because you know the Trump family owns the golf club and donates most of the other costs. They're just that generous! Oh, except maybe Eric was not quite accurate about some of that:

In reviewing filings from the Eric Trump Foundation and other charities, it's clear that the course wasn't free -- that the Trump Organization received payments for its use, part of more than $1.2 million that has no documented recipients past the Trump Organization. Golf charity experts say the listed expenses defy any reasonable cost justification for a one-day golf tournament.

Wouldn't you know it, dad's scam charity, the Donald J. Trump Foundation, has also given about $100,000 to the Eric Trump Foundation that ended up going mostly to Trump-owned businesses, as one does if one is a Trump. It's a pretty sweet deal: Donors are told their money is going to help kids with cancer, with practically no overhead because the Trumps are so damn generous, while in reality, a nice chunk of change ends up in Trump family businesses.

A compelling sales pitch evolved -- the free golf course and the donated goods and services assured donors that every penny possible went to charity. The Eric Trump Foundation employed no staff until 2015, and its annual expense ratio averaged 13%, about half of what most charities pay in overhead [...]

For the first four years of the golf tournament, from 2007 to 2010, the total expenses averaged about $50,000, according to the tax filings. Not quite the zero-cost advantage that a donor might expect given who owned the club but at least in line with what other charities pay to host outings at Trump courses, according to a review of ten tax filings for other charitable organizations.

Funny thing, though: In 2011, the costs for the Eric Trump Foundation golf invitational more than tripled, from $46,000 in 2010 to $142,000 in 2011. There's a really simple explanation for that, and he's currently sitting in the Oval Office and sending insane Tweets early in the morning:

"In the early years, they weren't being billed [for the club] -- the bills would just disappear," says Ian Gillule, who served as membership and marketing director at Trump National Westchester during two stints from 2006 to 2015 and witnessed how Donald Trump reacted to the tournament's economics. "Mr. Trump had a cow. He flipped. He was like, 'We're donating all of this stuff, and there's no paper trail? No credit?' And he went nuts. He said, 'I don't care if it's my son or not -- everybody gets billed.' "

A former member of the board of Eric's foundation, Katrina Kaupp, tried to put it in far more flattering terms, possibly because she has a house pet being held hostage (pure speculation on our part. It could be a child, too). Kaupp explained that Eric's foundation had simply become a victim of its own success:

"We did have to cover the expenses," she says. "The charity had grown so much that the Trump Organization couldn't absorb all of those costs anymore."

Hey, you gotta pay your own way if you're going to do your little sick-kid charity thing, Eric. And even though tax records show the golf tournament's costs running as high as $322,000 (per year!), Eric Trump continued to insist to Alexander that virtually everything from the golf course to the dinner was comped by the Trumps, who are really generous, although somehow the foundation never got around to giving Alexander the itemized list of expenses he'd asked for.

Which is kind of a problem, since the amount going to "expenses" seems like a heck of a lot more than a one-day golf event ought to cost:

Even if the Eric Trump Foundation had to pay the full rate for literally everything, Forbes couldn't come up with a plausible path to $322,000 given the parameters of the annual event (a golf outing for about 200 and dinner for perhaps 400 more). Neither could golf tournament experts or the former head golf professional at Trump National Westchester. "If you gave me that much money to run a tournament, I couldn't imagine what we could do," says Patrick Langan, who worked at the club from 2006 to 2015.

By pure coincidence, just about the same time Donald started grabbing the golf tournament by the pursey, the membership of the board changed radically. In 2010, the last year the expenses were in the $50K range, four of the original board members left; they'd all been personal friends of Eric. Over time, the board expanded in a particularly Trumpian way:

Those 4 were eventually replaced by 14 new board members, the majority of whom owed all or much of their livelihoods to the Trump Organization. Six of them were effectively full-time employees, including Trump lawyer Michael Cohen and executive vice president Dan Scavino Jr., who both serve in political roles for President Trump. Another owns a company that billed the Trump campaign $16 million. Add in Eric himself, as well as his wife, Lara, and 9 of the 17 Eric Trump Foundation board members had a vested interest in the moneymaking side of the Trump empire.

Yeah but the other eight were probably just close personal sycophants! Why is the media so negative?

Speaking of the mean old media, David Fahrenthold, the Washington Post reporter who won a Pulitzer last year for his extensive digging into Donald Trump's scammy foundation, got on Twitter yesterday to say Eric Trump hadn't been exactly accurate about his foundation:

You should definitely read the whole Forbes piece. There's a lot more about how the Eric Trump Foundation increasingly behaved like the Donald J. Trump Foundation, such as a certain amount of self-dealing and using donations to other charities as incentives for them to hold events at Trump golf courses. Eric Trump even got his very own portrait of his dad hanging over his couch, bought at auction at a foundation event. It's an intriguing question for geneticists and forensic accountants: We had no idea charitable malfeasance was actually a heritable trait. Also, there's this moment of great tristesse, when Alexander starts asking questions about stuff Eric doesn't want to talk about, and Eric sends the reporter a long breakup text message to tell him how badly Alexander had disappointed the young scion:

I was reflecting on it last night and have to say I was really disappointed when you said the story would be 'fair.'... It seems like there is a motive against either myself or my family. And if that is the case, I would simply rather disengage.

Yr Wonkette is supported by reader donations, which actually go straight to Wonkette. At least after Wonkette Baby gets her cut. Please click the "Donate" linky below!