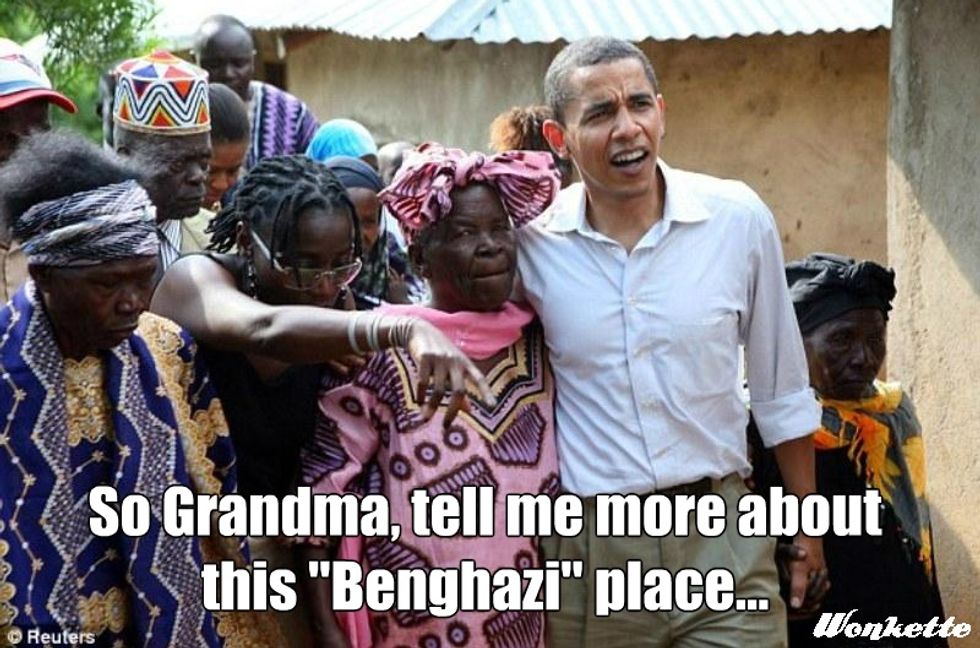 Warm up the Drudge Sirens, patriots! We have some major derp incoming at Bradlee Dean's Clearinghouse For Stupid Shit That Not Even WND Would Publish, in the form of a major exposé of Barack HUSSEIN Obama's family in The Kenya, which did you know is just crawling with Muslims? The piece, by wingnuts' favorite ex-Muslim Walid "No Really, I was Totally a Terrorist" Shoebat, informs us that Barack Obama's grandmother, Sarah Omar Obama (AKA "grandma Obama," AKA "Grandma Sarah," AKA "Mama Sarah," which you'd think someone else would have trademarked) is a devout Muslim who recently visited Mecca, where she said nice things about Islam, if you can believe that!

If you needed any further proof that Barack Obama is a fake sham falsely enthroned usurper who hates the Constitution and Freedom, look no further than the words and actions of his Kenyan grandfather's third wife Sarah, who is not a blood relation to the president, doesn't speak English, and who needs an interpreter to even converse with her "grandson." Obviously a member of the inner circle. We bet she's the one who insisted that Obama appoint Eric Holder as Secretary of Getting Whitey.

So what horrifying news does Walid Shoebat reveal? Well, for one thing, while in Mecca, Sarah Obama visited something called the Peace Be Upon You O Prophet of Allah Gallery (a name Shoebat repeats three times because it's scary), where she spontaneously wept while viewing the exhibits! Even more terrifyingly, she said that the gallery was "a great project in a great country for a great prophet." Is that the sort of thing a Real American Grandmother would ever say? Even worse, O Gentle Readers, she praised the Saudi government for supporting the Peace Be Upon You O Prophet of Allah Gallery project, since it serves "to enlighten others of the true image of Islam and Muslims." Shoebat doesn't waste time explaining why that's so awful, because obviously it just is.

Just in case that didn't outrage you enough, Shoebat suddenly veers off onto another horrifying but completely unrelated scary fact about other people who didn't influence Barack Obama's worldview, but could have, if he'd been raised in Kenya by those people:

But what is rarely discussed by the media is what the Obama family learned from Saudi Arabia: wife beating and how to buy underage sex slaves.

As proof, Shoebat links to a Kenyan TV clip from 2010 in which "President Obama’s uncle, Malik Obama, admits to buying an underage sex slave girl from her family." Oh, sure, there are some minor errors in there, if you want to nitpick little details, like how Malik Obama is Barry's half brother, not his uncle, and how the video description on YouTube notes that the woman was 19 at the time she married him, which counts as adult in both the USA and Kenya. Sure, she'd have been "underage" had she tried to buy beer in the United States (but not, it turns out, in Kenya). Still, Malik Obama says incredibly shocking things about how he came to marry his 19-year-old underaged sex slave child bride!

"the mother signed also, ahhh, and the brother, ahhh,” says Obama, proudly referring to the deal brokered with the family of the underage girl he calls “wife,” which he added to his harem. This is what the Obama family learned from Saudi Arabia.

(The "ahhhs" are actually  said by the interviewer, but it sounds creepier if you imagine Malik Obama saying them.) That sounds a heck of a lot like a dowry, and plural marriage, which are Not American but also perfectly legal in Kenya. Yes, Malik was 52 at the time, so still skeevy, but the video suggests the relationship was consensual, and the woman was neither "purchased" nor a "sex slave" -- unless maybe Walid Shoebat is one of those radical feminists who thinks marriage is slavery. How the Obamas "learned" any of that from Saudi Arabia is anyone's guess.

Are you thoroughly disgusted with Barack Obama yet? Well, just look at this atrocity! In a 2012 piece in The Guardian, Sarah Obama was quoted saying a pretty bad thing about wife-beating!

“The disobedient wives should be beaten.”

“Sorry?” replied Manning, as I fished in my camera bag for some imaginary popcorn.

“The wives that are disobedient, they should be beaten.”

“They should be beaten?”

“Yeah, they should be beaten.”

“Can you ask her,” replied the admirably unruffled blogger, “what about disobedient husbands?”

That's not a very enlightened thing to say at all. In fact, it sounds like something a 90-year-old woman from a deeply patriarchal culture might believe, and we are outraged that this woman sets American policy on domestic violence! After that shocking -- and, Shoebat emphasizes, completely Sharia-compliant -- comment, we feel confident that no American woman will ever vote for Barack Obama again.

Hey, Why Not Drag In Dinesh D'Souza While We're At It?

Next -- again without the least hint of transition -- Shoebat suddenly informs us that Dinesh D'Souza was far too charitable in his assessment of Barack Obama's cruel refusal to help another half-brother, George Obama, who lives in poverty in Kenya.* D'Souza attributes the president's neglect to politically motivated hate:

[It] would cost Obama so little to raise George out of poverty, and yet he won’t do it. This isn’t mere negligence; it suggests an active animus. The reason for that animus emerges in George’s book and also in my interview with George in the film 2016. In that interview, George rejects the anti-colonial philosophy that was espoused by Barack Obama Sr.

Piffle and tosh, says Shoebat. It has nothing to do with anti-colonialism! Duhh, D'Souza you dummy, overthinking it like that. It's all about worldview, explains Shoebat, and maybe purity of essence:

The most logical explanation is the simplest: George is not true pedigree -- he was raised by his mother, Jael Otieno, who is now a resident of Atlant [sic]. She is a Christian. Why else would President Obama still care for only the Muslim side of his family while abandoning his Christian side? It is because President Obama’s psyche, life, heritage, and convictions are still cut of the same cloth as Sarah, Said, Malik, and Musa, just as I was prior to my conversion to Christianity. These are Muslim through and through. This I know from a lifetime of experience, since my mother, like George, was a solid Christian and I was considered a mutt and a non-pedigree who was always encouraged by the community to keep distance from my own mother. But I thank God for Jesus and for mutts because this is what the Church and what America is all about. It is as if Christ hinted, “Come to Me, all you mutts and rejects, and I will give you rest.” If Obama is a convert to Christianity, I dare anyone show me that testimony. If Obama is a true blue Christian, than I must be Mickey Mouse.

So it only stands to reason: Barack Obama, that half-breed Muslin who was raised by his agnostic white mother and grandparents, just naturally disdains mutts like George and sides with his African Muslim step-grandmother to whom he is not actually related and has rarely had contact with, because he is obsessed with pure bloodlines. This truly is the simplest explanation, and also too, where's the baptismal certificate?

Shoebat closes with some boilerplate about how Obama is the greatest racist of all history, and the most divisive president ever, because Obama despises every sacred institution, one of which is "cop":

Never have I seen such hatred for cop, Church, life, liberty, and even the pursuit of happiness undermined more than now, under this president. Even the Jews, as Donald Trump so rightly stated, regret what they have done in electing Obama.

It's good to know that the greatest thinkers of our age are in agreement on what The Jews think.

Fortunately, Shoebat predicts, "history will someday record that the name Obama, like so many other losers, will be etched in the hall of shame," as will his grandmama, who has done so much to ruin America, too.

If that doesn't make you stop and think about where Barack Obama's loyalties truly lie, then you probably are the sort of bigot who thinks that writing involves one idea logically following another, and you too will be forced to see America taken over by purveyors of underaged 19-year old child bride sex slaves. Never forget: Barack Obama's extended family is full of Muslims, and that Keith Ellison probably represents them in Congress too.

* The Daily Mail really outdid itself with a 2010 headline about George Obama: "Obama's slumdog brother: Meet the hopeless drunk from a Nairobi shanty town who is the U.S. President's BROTHER." That just might be the Daily Mailiest Daily Mail headline ever.