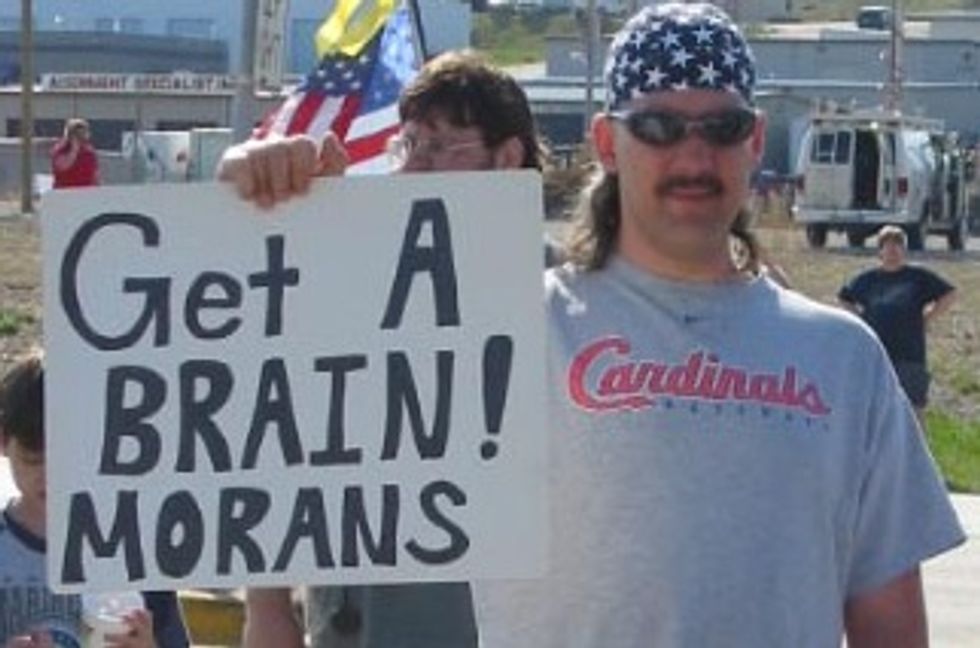 Brace yourselves for some stunning, shocking, jaw-dropping, too-amazing-to-believe-yet-totally-believable news! According to a new poll from PPP, the Republican Party is overflowing with morons. It's true. In fact, it's SCIENCE! Or MATH! Or some kind of liberal hoax thing!

Let's nerdsplore how goddamned dumb Republicans are, shall we?

If you think that's depressing, well, OK, you're right, it is depressing. But it gets worse:

Didn't Republicans used to more or less accept that basic science was real, scientifically speaking? Yes, but that's before the entire party adopted the official "I'm not a scientist" platform, thanks to Fox News teaching the "controversy." Even though there isn't so much a "controversy" as that one guy who's a shill for the fossil fuel industry.

Most Republicans who are capable of watching Cosmos without breaking things are in hiding now, though. Or, like brave Wisconsin Gov. Scott Walker, choosing to "punt" because gosh, those kinds of questions we learned about in grammar school sure are tricky.

Walker, by the way, is the party's current favorite for the 2016 nomination for president, because Republicans really appreciate his courageous willingness to not answer basic questions.

Any other mathematical proof that Republicans are dumber than a bag of hammers? Yes, glad you asked. Former President George W. Bush -- the guy whose name prominent Republicans are afraid to speak, the guy who is usually kept locked in a basement and away from the cameras, especially during national conventions, for fear of reminding the country that, oh yeah, he's the guy who fucked everything up, THANKS DUBYA -- has a 74 percent approval rating among the regular Republicans who don't get paid to be professional party shillers. They love the shit out of that guy. Still. So maybe it's a bad idea for "smart" brother Jeb to run around insisting he is totally not going to be anything like his brother if he gets to be the party's nominee, because his brother is a lot more popular than he is.

One more fun fact before we start drinking ourselves silly to numb the burning from the stupid, what burns?

Neat! The party that's always harumphing about THE FIRST AMENDMENT!!! and RELIGIOUS LIBERTY!!! has never read the First Amendment, which is a real surprise to anyone who's been trapped under something heavy for the last few years. And if you look at the crosstabs -- that's nerd talk for "details" -- it turns out the majority of the majority of Republicans who want to officially rename the country the United States of Jesus are women, so good for you, GOP ladies, your reading comprehension is especially impressive.

Yup, you may now commence with the drinking.