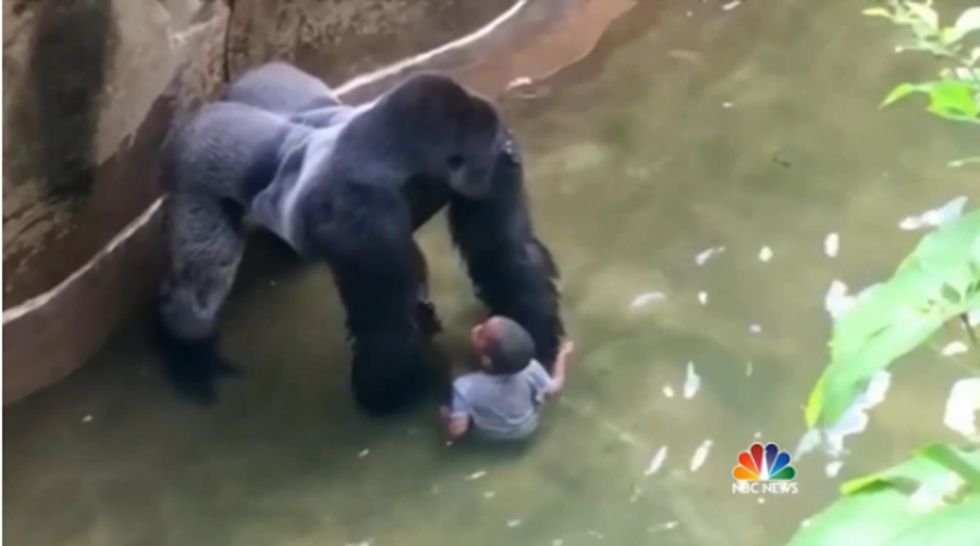 Can we agree that the baby being OK is a good thing? Maybe we can agree on that.

A three-year-old boy fell into a gorilla exhibit at the Cincinnati Zoo Saturday, and after a 400-pound male Western lowland silverback gorilla grabbed the child, zookeepers shot the endangered animal dead. The boy was rescued and reportedly unharmed. The internet spent a large portion of its time over the weekend screaming at whomever it decided was the worst responsible party: The boy's mother, for letting her child get away from her; the zookeepers, who should have done something other than shoot an endangered animal; the zoo designers, who should have put up a fence that small children couldn't crawl under, and possibly the boy's father, who wasn't even there but is black and has a criminal record, so there you go. Yr Wonkette is not enough of an authority on lowland gorilla behavior to say whether the zookeepers made the right decision, but we're certainly familiar enough with the behavior of H. sapiens to be disgusted all around, which is what we're good at.

Cellphone video taken shortly after the boy got past a fence and fell 10 feet into the moat surrounding the gorilla habitat shows the boy in a corner of the enclosure; the gorilla, a 17-year old adult male named Harambe, grabs the boy and rapidly pulls him through the water, then pauses, stands the boy up for a moment, and then grabs the boy by the ankle and pulls him into another corner of the moat. You may not want to watch this.

After the phone video ended, the gorilla took the boy to the upper part of the habitat, and members of the zoo's emergency response team shot the gorilla dead. And then the internet went apeshit, with experts who've watched a lot of nature shows explaining gorillas are peaceful gentle creatures who have in the past taken care of children who've fallen into their enclosures, that the zoo should have used a tranquilizer dart, or that the entire mess was mismanaged. Most zoo officials who have commented say this was a considerably different situation and that the gorilla was agitated -- possibly made worse by all the humans screaming -- and that the moments in the video where Harambe appears to be taking care of the boy don't outweigh the immediate danger the boy was in, like being flung around by the 400-pound primate. We'll let the New York Times handle that part:

The zoo said in a statement that the decision to use lethal force had been a difficult one. A tranquilizer would have taken several minutes to neutralize the animal, prolonging the risk. The dart could also agitate the animal, the zoo said, and cause a violent reaction.

“The zoo security team’s quick response saved the child’s life,” the zoo’s director, Thane Maynard, said. “We are all devastated that this tragic accident resulted in the death of a critically endangered gorilla. This is a huge loss for the zoo family and the gorilla population worldwide.”

The internet was also quick to accuse the child's mother of being the worst parent ever, endangering her kid (and probably being on welfare) by being inattentive and just generally the worst, because somebody has to be blamed in absolute terms:

Three days after her 4-year-old son[*] plummeted 20 feet into the Cincinnati Zoo gorilla exhibit, after animal rights activists blamed her alleged poor parenting for the death of a beloved, endangered ape named Harambe, then called on child protective services to investigate her, the boy’s mother became the Internet’s most reviled mom.

Authorities have not yet released the name of the child who tumbled into the Gorilla World exhibit Saturday afternoon, nor have they identified his parents. But the Internet doesn’t care about these sorts of formalities.

A mob of online parenting critics mobilized over the holiday weekend, lambasting a nameless figure they were convinced had neglected her child inside the zoo Saturday and was to blame for the events that transpired.

*NBC News says the boy is three, and that earlier reports had misidentified him as being a big grown-up four-year-old. Damned if we know.

The Washington Post declined to identify the woman, saying only that internet vigilantes flooded a Facebook post by a woman who posted a message thanking God her child had survived; she later shut down her Facebook account, as did a preschool where she may have worked, after it too became the target of angry messages. People were especially angry that the woman's Facebook message was focused on the safety of her child, without sufficient remorse over the death of Harambe.

Other women who share her name on social media received threatening messages intended for her, attacks that called her “scum,” “a really bad mother” and a “f‑‑‑ing killer.”

“that animal is more important than your s‑‑‑ kid,” one man messaged.

Another woman wrote: “u should’ve been shot.”

Also, there were memes, which have overtaken pictures of Calvin pissing on things as America's premier form of public discourse:

Needless to say, a lot of people have had some really charming thoughts about the fact that the family is black; The Daily Mail ran a terrific story about how the child's father had a "lengthy criminal record," although the dad was not at the zoo that day. So he's either an irresponsible parent, or maybe he passed on criminal genes to the toddler. The Daily Mail drooled over the man's charges for "burglary, firearms offences, drug trafficking, criminal trespass, disorderly conduct and kidnap," although it did note that

in recent years he appears to have turned his life around to become the proud father of four.

Indeed, the majority of his postings to the social media site are updates of his children and his working life.

Fox & Friends had thoughts on the incident, too, mentioning the Daily Mail story four times in a discussion of whether the parents should be jailed for causing the death of a beloved zoo animal:

“The father has a long rap sheet, including drugs and kidnapping charges,” Fox News host Abby Huntsman noted at the beginning of the program.

“Some say the parents need to be charged,” co-host Ainsley Earhardt later told wildlife expert Grant Kemmerer, “bringing up the dad’s past criminal history who wasn’t even there at the zoo at the time.”

And Brian Kilmeade began his interview with animal expert Jeff Corwin by posing a similar question.

“Some blame the parents of the child, calling them neglectful as reports surface the father has a lengthy criminal history,” Kilmeade said. “Is someone to blame here or was this just a tragic accident?”

“It’s a tragic event,” Corwin advised. “And it’s really hard for us Tuesday morning to kind of tell them what they should have done.”

Oops, and Fox & Friends also neglected to mention the bit about him turning his life around. So yes, one of the worst tabloids around managed to provide more context in its sensationalist coverage than Fox News did.

You'll be delighted to know that Wildlife Expert Donald Trump has weighed in on the matter, offering his expertise:

"I thought it was so beautiful to watch that powerful, almost 500-pound gorilla, the way he dealt with that little boy," He [sic] said, referring to moments in crowd-shot videos in which the gorilla appeared protective of the child. "But it just takes one second. It’s one second. It’s not like it takes place over, well, ‘he’s going to do it 30 seconds from now.’ It takes one little flick of his finger, and I will tell you, they probably had no choice.”

We suppose Donald Trump actually might have some valuable insights into the risks posed by a volatile, mercurial alpha male primate.

The cheerful red-meat-dispensers at Dead Breitbart's Home For Race Baiting got right to the point about how stupid black people are, finding three whole tweets blaming the shooting of the gorilla on "white privilege" before the child was identified as a black kid, and aren't Those People dumm? Needless to say, the wits were out in force in the comments on that story and another on the Cincinnati zoo; while most of the outrage was focused on the HORRIBLE PARENTS, there were nonetheless plenty of wags who just loved the hilarity of a dead gorilla, because HAW HAW black people are like gorillas!!!! (We've smooshed our screengrabs together here to present a collection of Breitbartians' finest efforts from both stories):

Fortunately, the child did not fall into a pit at Breitbart, where there appears to be little in the way of responsible supervision. Yr Wonkette is once again wistful our species isn't more closely related to bonobos, who instead of fighting in stressful situations, restore social tranquility by simply fucking a lot.