Shooty Screamy Former Police Chief: I Was An Undercover G-Man 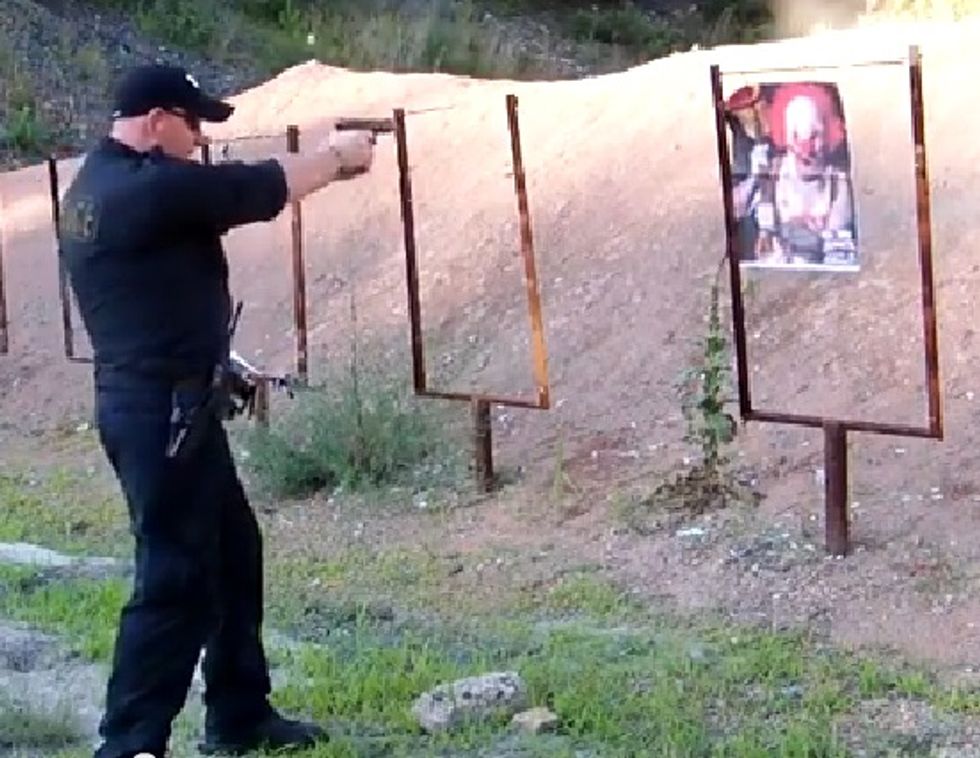 Remember that insane screamy gun-humper guy Mark Kessler, who got canned from his job as police chief of Gilberton, Pennsylvania, after posting a bunch of YouTube videos where he shot at photos of Nancy Pelosi and called on patriots to fight the tyrannical government and wanted to cleanse America of libtards, and liberal reporters and other enemies of freedom who all "take it up the ass"? The guy who even the "Oath Keepers" militia thought was a tad too radical? Last we heard from him, he was maybe going to get a reality teevee show or team up with another screamy shooty guy to form a legion of stupidheroes?

Well! Turns out he was just faking it, to fight extremism! He says. And if you can't believe someone as credible as Mark Kessler, who went on Alan Colmes's Fox Radio show (Alan Colmes has a Fox radio show?) to expose his involvement in undercover work, then who can you trust? No one, and we get the feeling that's the point.

Claiming that he couldn't identify the federal agencies that he was actually working for, because of "ongoing investigations," Kessler told Colmes all about how he was actually not an extremist gun humper at all, but was really just helping the Feds round up real bad guys! Here's the interview, which aired Tuesday:

KESSLER: I signed up with those agencies, several different agencies and began an operation where I was just a magnet. I was sent out there to attract the worst of the worst and frankly it worked.

COLMES: You were sent out by whom?

KESSLER: I was sent out for, well I can’t really say exactly who but, I was sent out by agencies to go out and attract and investigate, whatever I can do to find out who’s who and what’s what among these groups. When I say groups, I’m talking about Second Amendment groups, patriot groups, alleged patriot groups, militia groups.

For instance, here's one of his happy little videos, in which he warns that the UN is coming to Take Are Gunzes:

Isn't it nice to know that, like Master Thespian, that was merely ACTING? Really shitty acting, but still. Or maybe he's really just acting now???

Also, he insists that when he posted those screamy shooty YouTube videos, he wasn't working for the police department of Gilberton, Pennsylvania, but for the federal government, although it's not entirely clear if he means that he was never employed by Gilberton (in which case why did he fight being suspended from his job?) or if he's only saying that his "undercover work" in the videos was a federal operation -- we're guessing the latter, because as far as we can tell, he really did get fired. Or maybe the entire world is just a movie!

Kessler also insists that, while he can't reveal what particular agency he worked for, he really truly did help crack open some major plots against the government, and he "got to save a lot of lives." And he did it out of the goodness of his own heart, too, as he explains in this perfectly reasonable exchange:

KESSLER: I couldn’t tell anybody. I just couldn’t, it was complete deniability. I could not say a word to anyone about the operation. So again it was bigger than me. I’d seen an opportunity to advance my law enforcement career, and there was no way I was going to turn it down.

COLMES: Is this the first time you revealed this?

COLMES: Were you promised a job by somebody in the federal government to do this?

KESSLER: No, it was volunteer work.

COLMES: What was in it for you?

KESSLER: I got to save a lot of lives, I can tell you that.

So he was advancing his law enforcement career by getting fired as a police chief, doing freelance (or volunteer) work for the feds, but not actually getting a full-time job with the Top Secret Agencies he was operating with. Makes sense to us! And now he will have a career as... um. He doesn't quite say. Maybe that reality teevee show will come through, or he'll lead Bill O'Reilly's anti-terrorism army of mercenaries?

We totally believe him, and he doesn't at all sound just as delusional now as he did when he was screaming and shooting guns on YouTube.

You'll be astonished to learn that in the wake of Kessler's "revelations," wingnuts have been falling all over themselves to condemn him as a snitch, a traitor, a false-flag something something, and so on. And whoever is operating Kessler's Facebook page is also having some fun. A now-deleted post claimed that Kessler had been lying to Colmes the whole time:

Haaaaaaaa you were all punked hahahaha Alan Colmes is a retard fag liberal ! That idiot bought the story hook line and sinker ! As did so many other !! Damn I knew It would get some play but wow ! I didn't think I was that famous hahahaga ! It was complete bullshit ! But hey thanks for busting balls ! Alan Colmes was punked !!!! N he fell for it !! I couldn't resist throw more fule on the Fire hahahaga settle down people ! Maybe it wasn't the best prank but It made me laugh! I got the conversation started again ! Theirs no way in hell I would do any of that shit ! I though it was funny though ! Sorry if anyone got upset !!! I didn't think it would of blew up like that but oh well hahahahaha

We couldn't find a screenshot, but the alleged text was copied on Liberaland. Now, Kessler's Facebook page has a post referring to the excellent job being done by Barack Obama, who he calls "my president" -- you know, just like us liberals talk all the time about our Dear Leader:

We're inclined to go with the commenter who said "We know Kessler isn't posting on this page....The person is using proper grammar and can spell."

So whaddya think, Wonkers? Psychotic break from the get-go, attempted trolling of everyone for the hell of it, Dark Government Conspiracy, or Underpants Gnomes? Stay tuned -- the truth is out there. Maybe he's actually Andy Kaufman? [Incorrect. This guy is Andy Kaufman -- Editrix] This much is certain: As we said in our very first post about the guy, we're still not going to hire Mark Kessler to write for Wonkette.