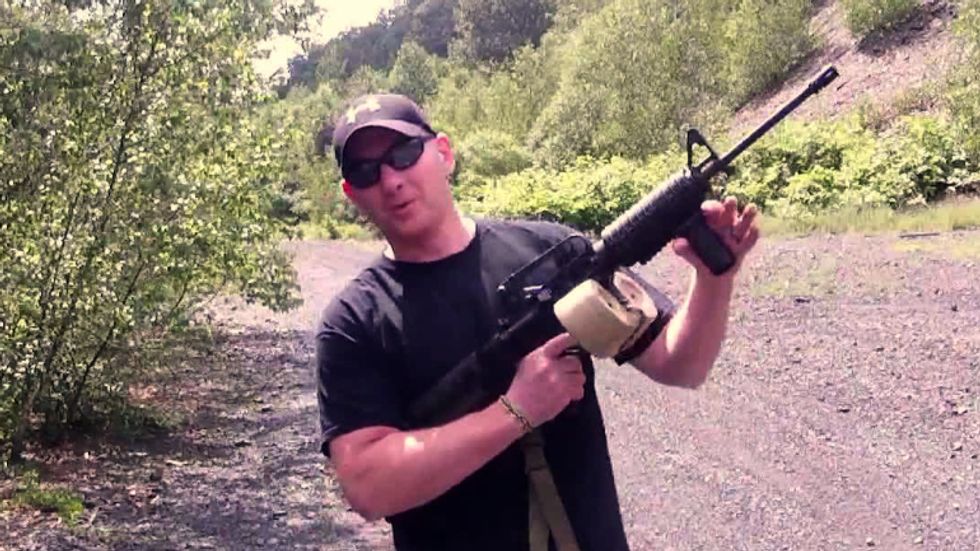 And to think, he seemed so stable.

Mark Kessler, the former police chief of Gilberton, Pennsylvania, and one of Yr Wonkette's favorite wingnut gun fondlers, has ended up pretty much where we thought he might when he first came to our attention back in 2013. (Then he posted a bunch of cussy YouTube videos calling for cleansing His America of libtards. He seemed nice!) We figured he'd either end up in jail or on the Republican presidential ticket, and wouldn't you know it, maybe both! For one, he may soon be cooling his heels in the crossbar hotel after threatening two residents of Schuylkill County in separate incidents of aggressive stupidity. For the other, Rick Santorum hasn't ruled him out as his running mate.

[contextly_sidebar id="j41ijgRiuImAXhfeAccoicX83l6QZArf"]Kessler came to national semi-attention after posting a series of obscenity-laced videos in which he shot at paper targets which he said represented liberal enemies like Nancy Pelosi and John Kerry while fulminating about liberals who "take it in the ass" and are enemies of freedom, yadda yadda. He called for "all true Americans, all militia members, all true oath keepers" to assemble and throw out the corrupt tyrannical government -- not of America, but of Schuylkill County, Pennsylvania, where apparently the worst liberal Hitlers were doing their Hitlering. He later clarified that he wasn't advocating violence, but he was wacky enough that the Oath Keepers militia -- a constitutionalist group -- distanced themselves from him.

[contextly_sidebar id="4pt3t1QTL05NSdLITdhaNa6IlKN5FSDP"]He eventually lost his cop job for having used city-owned weapons in his videos, in violation of borough policy. Yes, everyone knew the firing was mostly because he was a huge embarrassment, but he really didn't have permission to use the guns. Eventually, after several hilariously badly thought-out business ventures failed, Kessler came forward with one last exciting claim: He'd never actually been an anti-government militia loon at all! He was really an undercover agent pretending to be a militia loon, to catch real anti-government loons plotting crimes. Oh, and through it all, he somehow retained his seat on the local school board, which is apparently more open to screaming secret agents with persecution fantasies than is municipal government. That was last December, and we assumed maybe we'd heard the last of Kessler since he'd have to go into hiding or get a job as a night watchman at a sugar beet processing plant or something.

Ah, but we didn't count on Kessler's talent for being an asshole, now did we? Our lack of faith no doubt disturbs him. Further. Kessler was charged Friday in two separate incidents, dating from August of this year, in the nearby community of Frackville, a name we swear we are not making up. In the first, on August 19, Kessler got into a contretemps with William Creasy, a Frackville borough councilman, at the checkout stand at a local grocery store. Kessler accused Creasy of "talking about his daughter," an offense which Creasy denied (and which is not generally something you're allowed to get in people's faces about, although maybe things work different in Pennsylvania). Then things escalated!

Creasy said Kessler walked to his side of the register, approached him in an aggressive manner and began to push him in the chest and at one point pointed a finger at his face, according to the complaint.

Creasy recalled Kessler telling him "you better watch your back, I know where you live," according to the complaint.

Creasy also reported Kessler had been harassing him with slanderous emails and worried the email harassment would continue and also what Kessler could do to his family, according to the complaint.

Kessler was charged with a misdemeanor count of harassment in that one. Then went on to earn himself some additional charges related to his behavior a couple days later, on August 22, near a Rite Aid store. Shannon Heiber was just driving along Route 61 near Frackville when she passed a Hummer driven by Kessler, who then followed her into the Rite Aid parking lot, where he then proceeded to lose his shit, according to the complaint:

Heiber reported she pulled over to let the vehicle pass but the driver, later identified as Kessler, pulled alongside her, rolled down the passenger's side window and began to scream at her and use obscene language, according to the criminal complaint. The woman recalled Kessler telling her "What are you doing? You're lucky my kids are in here or you know what would happen," according to the complaint.

The woman said Kessler began to pull away but suddenly stopped, backed up and reached down, pulling out a firearm to show her, according to the complaint.

Heiber said she is scared Kessler may seriously harm or kill her especially since he acted the way he did with young children in his vehicle, according to the complaint.

That second incident earned Kessler charges of "misdemeanor offenses of terroristic threats, harassment and disorderly conduct," which you'd think his handlers at the unnamed government agency he used to work for would have helped him out with. We're sure he has a perfectly good explanation for all this, like maybe he suspects the councilman is part of ISIS and the lady who passed his Hummer was Dennis Weaver in drag, trying to stir up trouble in Frackville. Despite all the studious sourcing of information in the story, the local paper didn't mention whether Kessler is out on bail or his own recognizance, which you'd think might be a relevant bit of information.

Once the real truth comes out, we'll be sure to let you know.