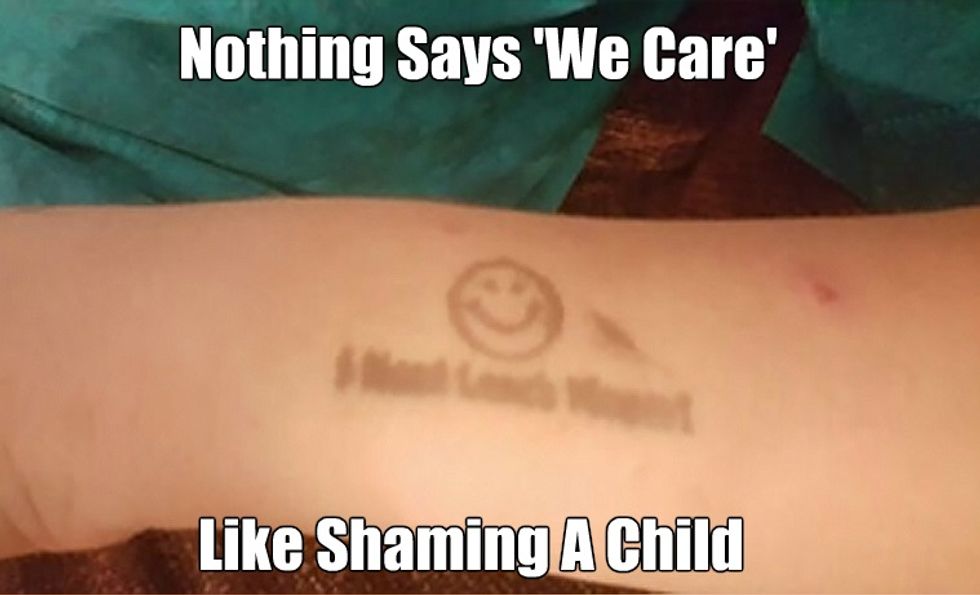 You want some withering sarcasm with that, hon?

You'd think that by now, schools might have run out of ways to surprise us with their inventive, creative shaming of kids whose lunch money accounts have run low. Schools have dumped kids' lunches in the trash, stamped their hands, withheld lunch, tossed reduced-price breakfasts in the trash, and fired lunch ladies for giving hot lunches to poor kids instead of the Cheese Sandwich of Humiliation. Topping them all is the kid who was taken away in handcuffs for "stealing" the free carton of milk he was entitled to with his free lunch. That troublemaker was a special case, of course, because he sassed a school cop. While being black.

So while it doesn't quite live up to the poor-shaming of hauling kids away in handcuffs, we are nonetheless impressed by the shaming technique dreamed up by Gardendale Elementary School in Gardendale, Alabama: They sent a third-grader home with a big black stamp on his arm reading "I Need Lunch Money!" Clearly, a note or a phone call home wouldn't have been shaming enough. But it had a smiley face on it. As everyone on the internet knows, that always makes things better.

Maybe it has something to do with the kid's account not actually being empty? The day Jon Bivens's son was sent home with the stamp, it was the last week of school, and the kiddo still had a positive balance of $1.38 in his account. Bivens said his son usually takes a sack lunch from home and only uses the account to get small snacks. That day, it was an ice cream. In the past, the school had always sent an automated email to the parents when the money in the account ran low -- this was their first encounter with the Shame Stamp.

Not that Bivens's own reaction wins any awards for "measured" and "proportionate," either. You might think a parent who has an issue with a policy like this might go first to the school principal, but instead, Mr. Bivens went to the local paper:

The father said that his son was "branded."

"When you start stamping a message on a child's body instead of calling...it's not okay."

Bivens's son did not return to school for the last few days of the academic year.

We can see being angry about the stamp, especially when the account had money in it. We can even understand the impulse to call the paper (but not the principal? Come on). Pulling the kid out of school for the last several days? Nah, mang, too much. You don't keep your kid home over something like this -- the boy might have enjoyed saying goodbye to teachers and friends for the summer, maybe. Plus the 8000th showing of Frozen on DVD.

But what about the school? Certainly they have a perfectly good reason for this practice, which after all washes off and is only a little bit of shame intended to save the kid from financial irresponsibility, or at least keep the school solvent:

Principal Laura Ware said that she was not aware of the incident, but that the lunchroom department uses different methods of alerting parents of their child's balance. She said those notices include emails, notes, stickers, and stamps.

She said that the school first sends emails when a child's account balance is low or negative. If parents do not respond, she said that lunchroom workers use the stickers, or stamps, like Bivens' son received.

It's a pro-social form of financial transparency, is all. Like the light poles in Gary Shteyngart's novel of the near-future, Super Sad True Love Story, which display everyone's credit score as they walk by.

Bevins called the stamp "a form of bullying and shaming the kids," which of course it is, and what's wrong with teaching children early on that they'll be judged by displays of financial status? This is America after all. The man does have a gift for melodrama, we'll give him that:

For her part, Principal Ware told AL.com that all she wanted was effective communication, saying "we want to communicate in a way that our parents are happy with," and adding that in the future the school would be happy to arrange for reminders of low balances to be handled by email, with no stamps for any parents who ask they not be used. That's a tad more professional, we think, than the reaction of the director of public information for Jefferson County Schools, Nez Calhoun, who told ThinkProgress that maybe the use of the stamp resulted from a "software glitch," and also lamented that Mr. Bivens hadn't quietly contacted Principal Ware to resolve the issue instead of blabbing to the media:

"It is extremely unfortunate that this happened to that student," Calhoun said. "I feel for the parent, but we didn't know anything about it until we saw the story in the paper."

Yes. Now everyone thinks the school is into publicly shaming kids who don't have enough money. That IS unfortunate.

She also explained that when kids have insufficient funds in their account, they don't only get the shame stamp on their arm; they also get a nice no-frills lunch consisting of a peanut butter and jelly sandwich and an apple, which strikes us as a bit less awful than other schools' poverty lunch of a single slice of American cheese food product on white bread.

So, you know, apart from the arm-branding thing, it could be worse. Almost everybody in this story is kind of awful except the little kid, who'll have a fine story to tell in high school about the time he got branded for being a Poor and his dad went apeshit.