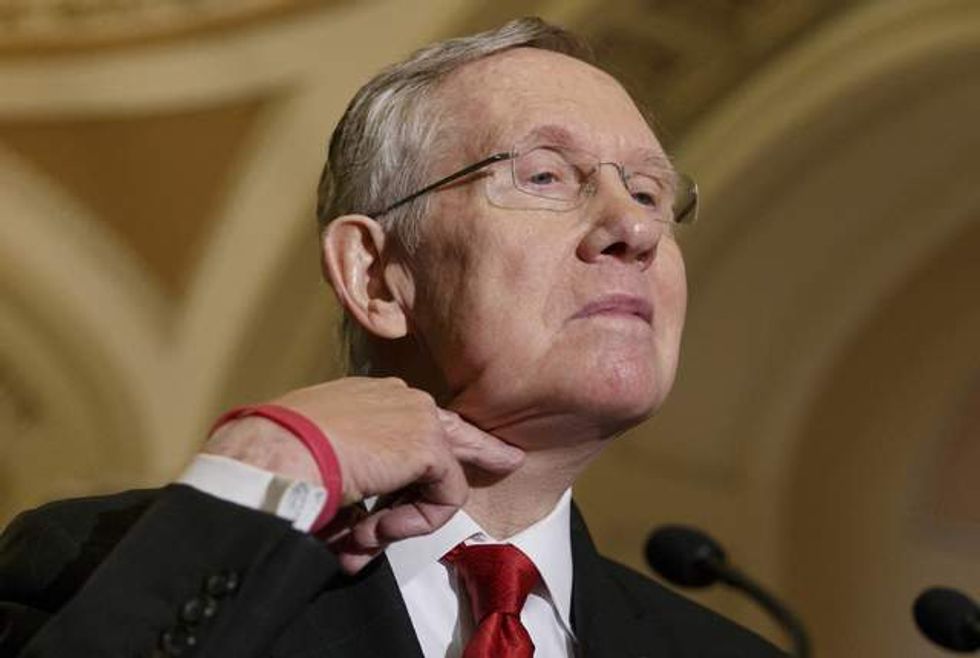 he could have your throat slit any time he wants

Forgive us, but we keep forgetting that Harry Reid is still Senate Minority Leader. Generally, he's just sort of fading into the background as he edges toward retirement, although we are ever mindful of the fact that he is probably mobbed up and could have us murdered if and when he feels like it. It must be that sense of security that has currently emboldened him to be our fave version of Harry Reid: "Fuck you, I'm almost out of here Harry." What's that version of Harry up to these days? Trolling the ever-living-snot out of the GOP, of course.

On Thursday, he said he would attach gun control amendments to a Republican-backed anti-Obamacare bill in the Senate. [...]

It would bar gun ownership by those convicted of a misdemeanor under a law designed to crack down on aggressive protesting at abortion clinics. [...] The Freedom of Access to Clinic Entrances (FACE) Act of 1994 prohibits the intimidation of or interference with those seeking access to abortion clinics. According to the National Abortion Federation, the Department of Justice convicted 89 individuals under the FACE Act between 1994 and 2013.

Seriously, that is some straight up ball-swinging behavior from ol' Harry. Regrettably, it didn't mean anything, given that the Senate still voted to repeal Obamacare. Now, you might be saying "wait, haven't we voted to repeal Obamacare approximately eleventy billion times already?" Haha silly, that's the House that keeps tilting at that particular windmill. This time, it is the Senate engaging in an utterly impotent and frivolous waste of your tax dollars. Hooray!

Senate Republicans have tried more than a dozen times before to pass legislation to repeal Obamacare, but they could not get the 60 votes needed to overcome Democratic filibusters. In Thursday's vote, Republicans were able to prevent a Democratic filibuster by using a budget procedure known as reconciliation that allowed them to pass the bill with a simple majority.

What does the Republican repeal bill do? Oh, it gets rid of the individual mandate, gets rid of the mandate for employers with more than 50 workers, gets rid of fines for failure to comply, gets rid of subsidies to low-income people, gets rid of the Medicaid expansion ... you get the picture. In a particularly nice touch, those last two provisions wouldn't be in effect until after the 2016 elections, giving the GOP ample time to fool both the poors and the olds into thinking that they won't basically leave them to die in the streets. And of course it strips funding from Planned Parenthood because affordable reproductive health care really is the greatest tragedy facing America right now.

Never you mind. Bamz is going to veto this thing so hard, and every time they try again, Harry Reid is just going to attach more and more absurd amendments to every bill. The next 13 months are gonna be awesome.