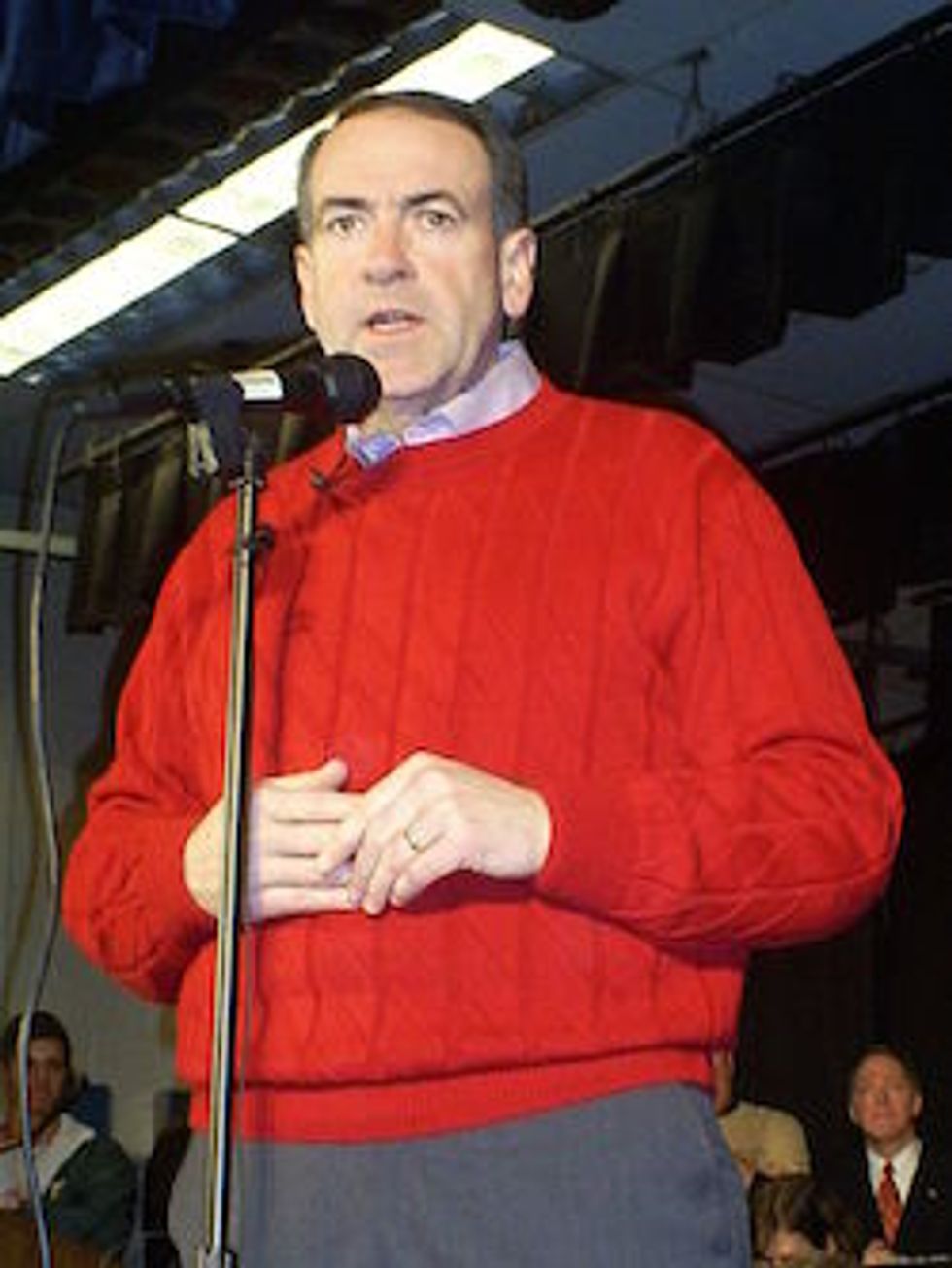 Women are strange creatures, aren't they? With their shoes and their vaginas and their not being men, they are quite the mystery. Like magnets. And howthe tide goes in, the tide goes out. If only there were someone, a real expert, to explain how do ladies work and how should we treat them, since we obviously must treat them different from how we treat normal people.

Hey, here is A Expert! He is Mike Huckabee, who has many deep thoughts on women and is always eager to demystify these strange creatures for us, while doing GOP outreach to the womens by telling them they are dumb whores who cannot control their libidos. But not this time. This time, he has some words to fart from his mouth about how women, especially ones who run for political office like they are some kind of men or something, are special.

Female candidates should be treated with a "sense of pedestal," former Arkansas Gov. Mike Huckabee (R) said during a recent interview with The New Republic while discussing a potential presidential run against Hillary Clinton. [...]

"[F]or those of us who have some chivalry left, there’s a level of respect," Huckabee told TNR. "You treat some things as a special treasure; you treat other things as common."

"I’ll put it this way," Huckabee added, "I treat my wife very differently than I treat my chums and my pals. I wouldn’t worry about calling them on Valentine’s Day, opening the door for them, or making sure they were OK."

Wow, it is like he really gets us, right, ladies? Who among us don't not want to be treated with a "sense of pedestal," whatever that means? What could possibly go wrong with putting us special treasures on a pedestal? Nothing, so long as you haven't read Henrik Ibsen's thoughts on that. (We are pretty sure Huckabee has not read Hedda Gabler because it is not in the Bible so what is even the point?)

We don't want to be equals. We don't want to be taken seriously. We don't want to lean in or out or wherever we're supposed to be leaning these days. We don't want to have equal pay or control of our own bodies and our own lives. Nah, that is unchivalrous nonsense. All we want, all we really really want, is for Huckabee to open doors for us and call us on Valentine's Day. Because we are special. We are treasures. We are as a pedestal. And we like when he asks us if we are okay, which he would never do for his friends (who we guess are all men) because men don't need that kind of chivalrous respect. And we like when he tells us to stop doing sex and asking Uncle Sugar to pick up the tab. And we like when he tells us we don't need no stinkin' health care for our special treasure parts. It makes us feel so good. It makes us feel so special. It makes us feel so not-at-all-patronized. We are positively swooning on our pedestals even in this very moment. Because Huckabee knows us better than we know ourselves. He has a wife, after all, and everyone knows having a wife makes you a lady expert. (Bonus points if you also have daughters.)

Naturally, there is one exception to the ladies-are-special rule. Can you guess what it is?

"With all due respect to Hillary Clinton, it does make a difference why they died," Huckabee said, referring to Clinton's comments during a Senate hearing on the attacks in January 2013.

You see, Hillary Clinton does not deserve to be treated as a pedestal because she murdered all those people in Benghazi with her own bare hands. No Valentine's Day calls for you, Hillz! Open your own damn doors.

But other than that, and also other than all the things Huckabee has ever said about women that are the opposite of being respectful, Huckabee is all about respecting the ladies, in his own special treasure way. Because chivalry.