Shut the F**k Up, Luke Russert (And Chuck Todd Too) 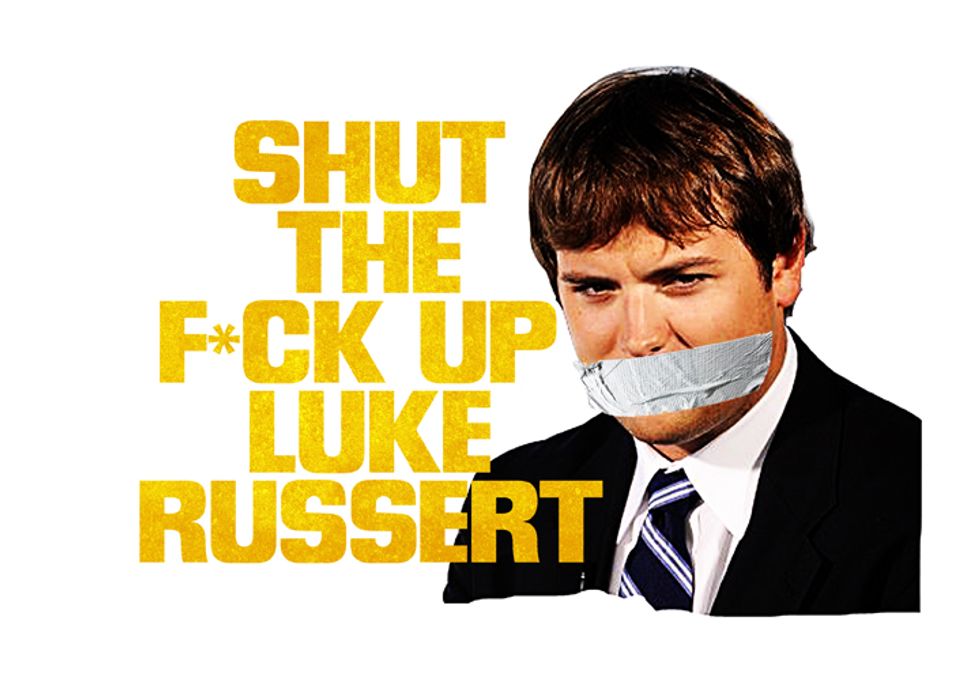 So according to the World Of Cable Chatter, Alison Lundergan Grimes has completely destroyed her chances of being elected to the U.S. Senate because she didn't answer the Louisville Courier-Journal editorial board's question about whether she voted for Barry Bamz in 208 and 2012. Grimes has been so eager to distance herself from the president that she went on for entirely too long about how the election isn't about Obama and proclaimed herself a big fan of Hillary Clinton instead. As WaPo notes, she could just as well have said:

"Yes, I voted for him," you say, "but I've been disappointed by a lot of the things he's done, particularly on COAL and JOBS and GUNS" or whatever. It's simple. And then you can say, "but I backed Hillary in the primary" and so on and so on.

On the other hand, while it was kind of a dumb way to handle the question, there is also such a thing as overstating the importance of the bobble. For instance, there's JoScar and Chuck Freakin' Todd on Morning Joe today, writing Grimes's obituary, although one recent poll has her running even with Mitch McConnell:

It's actually hard to say which one of these dips is more insufferable:

Todd: The idea of -- I'm sorry even to say you regret your vote that would almost seem as disingenuous. But that is -- can Kentuckyians expect her to cast a tough vote on anything? Is she ever going to answer a tough question on anything? You want to be a U.S. Senator? If you can't say -- if you can't find a way to stand behind your party's president, you can disagree with him but can't answer that basic question and come across looking ridiculous. I think she disqualified herself.

OK, so Grimes thrice denied Obama, and these cocks are crowing. Disqualified herself? That's absurd. In a world where Mark Sanford can hike the Appalachian Trail to Argentina (not to mention the drowned kids on his property) and still get elected to Congress, and where Joni Ernst is still leading in her race for the Senate after saying that the UN's Agenda 21 is going to GET US unless she can help Arrest Barack Obama, an awkward answer only disqualifies you if you admit you like eating babies with béarnaise sauce, and that's only because people hate the French.

So yeah, Grimes is disqualified, but Tom Cotton is getting nothing more than cheerful "Oh, what a goofball!" smiles for his completely bullshit claim that ISIS and the Mexican cartels are on the verge of doing terrorism in the Heartland.

But at least Cotton gave a straight answer, right?

And then there's Luke Russert, who tweetered about the Greatest Campaign Shocker of 2014:

Wow. what's that thing we like to say? Oh, yes:

Obviously, we've got to get a Chuck Todd version on the shelf, too.