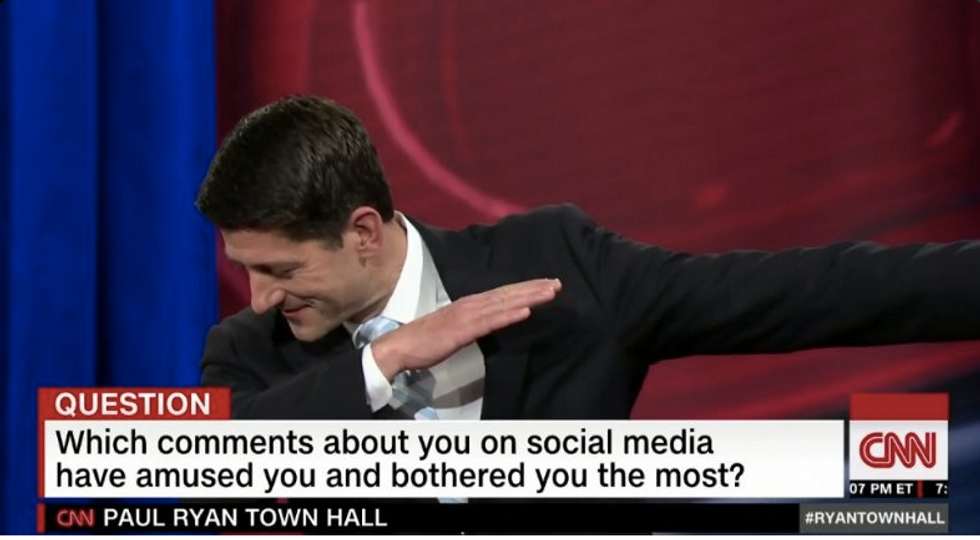 Hey! Are you, like millions of Americans, very worried about losing your health insurance once the GOP repeals the Affordable Care Act? Are you wondering how you're going to get your medications, or see a doctor when you are sick? Well! Paul Ryan is not worried! He is footloose and fancy-free! He even took some time out of his CNN town hall Thursday night to do some whimsical dabbing, after a cancer patient tried to explain to him how the ACA saved his life, in order to show us all what a good sport he is about people jokin' about him on the internets! Tee-hee!

Oh that whimsical boy! But back to the cancer patient.

Jeff Jeans of Sedona, Arizona, said he was a life-long Republican who totally hated the idea of Obamacare and was very, very mad about it. Until he got cancer -- and was able to get treatment, and is alive now, thanks to said Obamacare.

Ryan responded by saying "Oh, we wouldn't do that. We want to replace it with something better."

With what, Paul Ryan? Folger's crystals? These people have had eight years to come up with that "something better" and have thus far been unable to do so. Because since the days of Richard Nixon, the Republican "alternative" to single-payer was Obamacare. It was a mandate. So now they don't have anything. What would be better than Obamacare would be Medicare-for-all, single payer or multi-payer, but I sincerely doubt that is what they are going to come up with.

So yes, Jeff Jeans, although Paul Ryan is doing an adorable little dance and saying how glad he is you're alive, he's going to take away your ability to get healthcare. You have to have a mandate (or single-payer) in order to cover pre-existing conditions, because if everyone did what you did and only got insurance when they got cancer, insurance would be absurdly expensive.

In another segment, a woman protected under DACA (Obama's Deferred Action for Childhood Arrivals program), asked Ryan if she needed to worry about getting deported, which Ryan laughed off, insisting that neither he nor Donald Trump wanted to do tha. Then Ryan started talking about how much he loves Oklahoma City and how he was married there. More whimsy!

The thing is, Trump did say throughout his campaign that he wanted all people who came here illegally deported. He only recently changed it to "just the criminals," probably because he finally got it into his head that there is no way we have the money to do that. Also, during his Senate hearing, Trump's proposed Attorney General, Jeff Sessions, stated that repealing DACA would "certainly be constitutional." Unfortunately, when DACA was enacted, those currently protected by it gave their information to the U.S. Government under the assumption they wouldn't be deported. Now that this information is available, it could make it easier for Trump to deport them.

Ryan was also asked about the GOP plan to deprive millions of women of health care by defunding Planned Parenthood:

Ryan insisted, incorrectly, that defunding Planned Parenthood came from a "longstanding tradition" of not funding abortion with taxpayer dollars, which he wrongly claimed both pro-choice and anti-choice people were totally on board with. In reality, where the rest of us live, the Hyde Amendment, which prevents tax dollars from going to abortions, is quite controversial, as it prevents women who are poor and on Medicaid, or women serving in the armed forces, or who receive government-funded health care of any kind, from being able to have abortions covered by their insurance.

Planned Parenthood has received federal funding since 1970 when President Nixon signed the Title X “Population Research and Voluntary Family Planning Programs Act,” with bipartisan support, noting that "no American woman should be denied access to family planning assistance because of her economic condition." This is therefore a longer standing tradition than the Hyde Amendment, which was enacted in 1976.

Moderator Jake Tapper explained to Ryan that money "given" to Planned Parenthood does not go to abortion services, but Ryan insisted money was "fungible" and that he was pretty sure that somehow, it was funding abortions, which ... makes no sense. If I go to a cardiologist at a hospital that gets federal funding for cancer research or takes Medicaid or Medicare, that money is not going to somehow fund my EKG, that I am paying for, with my money and my insurance. That's not how anything works.

Ryan then insisted the money could be put to better use by having it go to "community health centers," which experts agree are already overburdened not in any way capable of absorbing patients from Planned Parenthood.

Another segment involved a question from a Trump supporter whose son died of a heroin overdose:

I missed most of this live, because I was yelling "WHAT THE FUCK IS EVEN WRONG WITH YOU?" at my television during it. Said Trump supporter believed building a wall so the heroin can't get in was a great way to curb the availability of heroin in this country (it's not, they have other ways), and asked if they were going to mandate step-down procedures for people who were prescribed Oxycontin and other opioids. Then I yelled "REALLY, NOT GONNA ASK ABOUT NARCAN AVAILABILITY?" at my television.

Ryan answered with a bunch of Scott Walker-praising bullshit about how they were totally gonna solve all the opioid problems with swell Republican measures. Except the thing is, gutting the ACA is pretty much the worst thing that could happen to people with drug addiction problems. The repeal will cut $5.5 billion in federal funding that goes to help people with mental health and drug addiction problems. It will particularly affect those on Medicaid seeking rehab and medication-assisted treatment for drug addiction, as a large percentage of Medicaid funds goes to help such people. Those who have Medicaid as a result of the expansion will lose that.

So a lot of other people are going to be losing their kids to heroin overdoses, thanks to Donald Trump and Paul Ryan. I hope this guy is cool with that.

But hey! Whatevs! Some people are probably gonna die. Other people will just be really sick and unable to do anything about it. It's totally cool and chill, and at least they all have Paul Ryan dabbing and Donald Trump tweeting about how he's mad at Meryl Streep to comfort them. Or something.