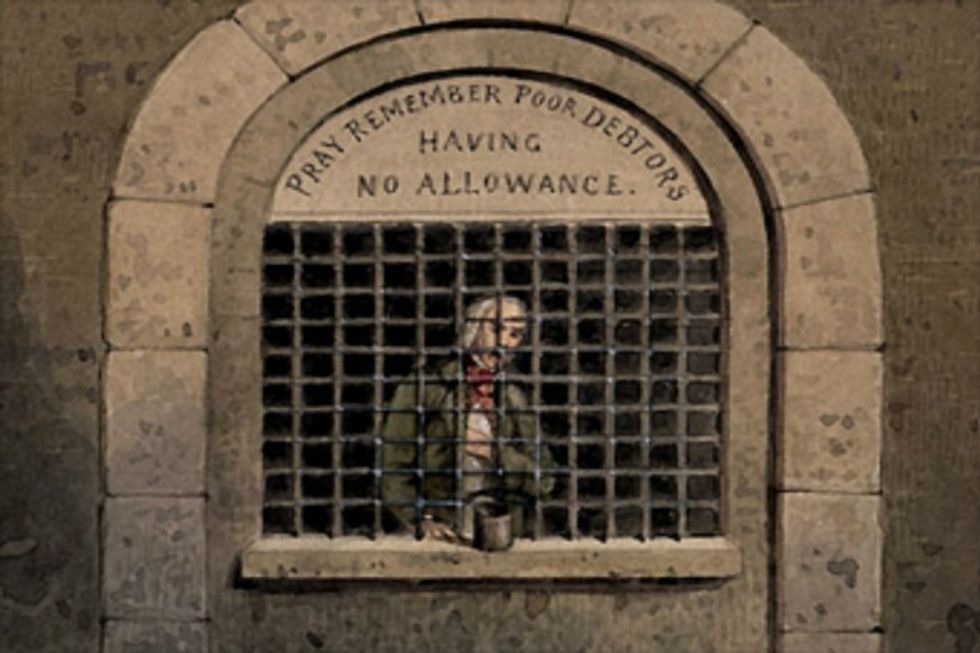 Did you hear the one about the president's son-in-law whose company gets judges to order the arrest of people who owe back rent? The punch line is, it's perfectly legal and lots of companies do it, at least in Maryland, which allows the arrest of those who miss court appearances in cases of unpaid debt. The Baltimore Sun found that since 2013, the Kushner companies have requested arrest for 105 former tenants in Maryland, because business is business and breaking legs to collect debts remains illegal.

The arrests, which have the appropriately old-timey name "body attachments," aren't technically for debt, because heaven knows it's not yet a crime to be poor. The Sun explains how it works:

When a landlord wins a judgment against a tenant, he or she may ask the judge to order the tenant to appear in court to answer questions about assets and employment to determine garnishments. If the tenant fails to appear, the judge may issue another summons to determine why the person shouldn't be held in contempt.

If the tenant again fails to show up, the landlord can ask the judge to issue a body attachment.

When a tenant is arrested, a judge or commissioner can hold him or her and set a bond. Defendants unwilling or unable to pay the bond can end up in jail.

The Kushner Companies certainly aren't the only property management company to use the tactic, but they're definitely the most aggressive, requesting more arrests than any other landlord in the state, according to court records reviewed by the Sun. In all, 20 former Kushner tenants went to the pokey for some period of time.

Needless to say, the Kushner Companies insist they only seek body attachments as a last resort after other collections attempts fail, and they follow state and federal law. You have to get people to pay up, don't you? And nothing gets their attention like slapping them in jail, so they lose their jobs and become less able to pay. The logic is indisputable.

Bleeding heart liberals and consumer advocates, who hate successful people, have been making all sorts of excuses for poor people and calling for legislation to limit or eliminate body attachments, because they have no respect for tradition. Maryland Attorney General Brian Frosh says that judges may issue the orders on insufficient evidence, like a landlord's assertions, without written records, about debts and attempts at collection. Frosh and other reform advocates also note that tenants may not even recognize the name of the collection company when a debt has been sold. They argue that in some cases, those who end up being arrested didn't actually receive notice of the court appearances they ended up missing:

"People are being arrested for a debt that they may not even be aware of, or for a court date they may not have been aware of," said state Sen. William C. Smith, a Montgomery County Democrat. Being arrested, he said, has a "devastating effect."

Smith introduced a bill in Maryland's General Assembly earlier this year to place limits on body attachments, but despite support from A.G. Frosh, he ended up withdrawing it because the bill had no support in committee, where it was opposed by state Sen. H. Wayne Norman Jr. And why was Norman a problem? He's an attorney who represents landlords, and it was clear to Smith the bill "was not going to get out of committee."

For his part, Norman thinks body attachments are a great idea, and not just when they're nipple piercings:

Landlords spend at least $150 to file the paperwork required to compel tenants to appear to negotiate debt repayment, Norman said. He said such tenants drive up the rents for everyone else as well as jeopardize property owners' ability to pay their mortgages.

If defendants didn't face serious consequences, he asked, "why would anybody obey a court order?"

"The body attachment is the only thing that gets a lot of people's attention," he said.

Come. Let the anger consume you.

He seems nice. Why isn't there more respect for the costs incurred by put-upon slumlords like the Kushner Companies, who may have to pay a whole $150 to take poor clients to court? That really could cut into their millions of dollars in profits. Also, while Norman and other supporters of body attachments bring up the plight of small landlords who need to collect back rents to stay afloat, that's not actually the case, according to Marceline White, executive director of the Maryland Consumer Rights Coalition. She said body attachments are mostly sought by big corporations like the Kushner Companies. White wonders whether multimillionaires like Kushner really need to be "spending all this time and money to pursue people who have fallen behind."

Obviously, people should be paying their bills. But arresting someone years after seems fairly extreme.

Clearly, a socialist who doesn't want the rich to be rewarded for their hard work.

The Sun piece looks at one fairly typical case: Priscilla Moreno, a school bus driver, was sued in 2015 by her former landlord, a Kushner affiliated company, for $7,100 in unpaid rent and lawyers' fees; a body attachment warrant against her was approved last July. Instead of going to jail, she filed for federal bankruptcy, a step that others facing arrest have also taken. Probably a good idea, since she had debts of $60,000 and an annual income of $31,000.

The body attachment order "was very extreme," she said. For weeks, she lived in fear that she could be stopped for a traffic violation and end up in jail.

"If you don't have the money you have to stay in jail until you pay," she said.

Well, look, lady, if you'd just shown up in court and made your case, you wouldn't be in so much trouble. We're a nation of laws, and if you want to get away with stuff like not paying your bills, you need to be a (self-claimed) billionaire casino owner. The law is the law, and unless you're a presidential son-in-law who forgot to fill out your security clearance paperwork with every single meeting with some Russians, you'd better not expect to get any breaks.

Please click the "Donate" clicky below, because Wonkette has no ads! We love you, you pay our rent.