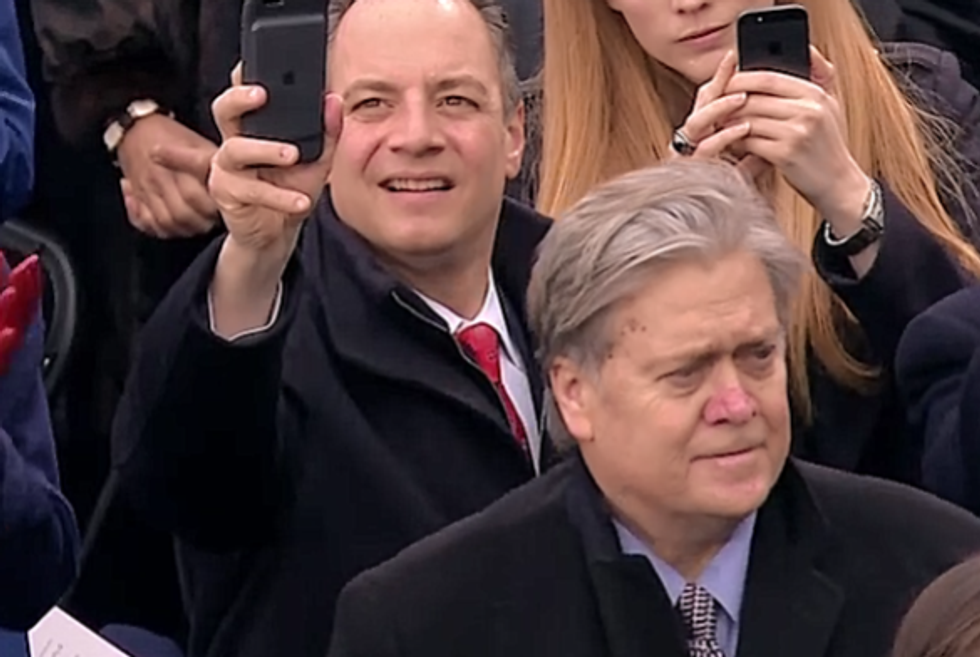 Someone at #laxprotest knows there is more than one front to this war. pic.twitter.com/NsGshHxAgP

Steve Bannon, avowed Leninist, has just been appointed to a permanent position on the Principals Committee of the National Security Council. How ironic! The National Security Act of 1947 reorganized the military, created the CIA, and set up the NSC to advise the president on national security matters. Meanwhile, according to The Daily Beast, Bannon once declared, “Lenin . . . wanted to destroy the state, and that’s my goal too. I want to bring everything crashing down, and destroy all of today’s establishment.” So much for a rational national security policy.

Aside from the Bannon irony, the new administration’s romance with Russia should raise a sardonic smile. The NSC was formed in 1947 in the early days of the Cold War. Its early role was to counter the threat posed by the USSR. Yes, the USSR doesn’t exist anymore, but does Vladimir Putin know that? What about all of his admirers in the Trump coterie, starting with the President himself, who “always knew [Putin] was very smart!”? Let us not forget former Trump campaign manager Paul Manafort who is being investigated by the FBI for his ties to Russian officials. Or Trump’s foreign policy adviser and alleged Russian bagman, Carter Page, who changed a plank in the Republican Party platform to favor Putin for some reason that no Trump supporter can divine. Small mercies: these last two are not on the NSC -- yet. But Trump’s National Security Advisor and NSC member, the rightly fired general Michael Flynn, has been investigated for his Russian ties by the FBI, the CIA, the NSA, the Justice Department, the Treasury Department, and the office of the director of National Intelligence. Wow!

So, back to the shake-up at the NSC. There has been a torrent of reaction to the change in the Principals Committee, mainly by sane people. What’s driving us crazy is the placement of Bannon on the committee and the removal of the Director of National Intelligence and the Chairman of the Joint Chiefs of Staff. Really, though, setting aside for the moment the scary thought of Bannon anywhere near a decision on whether to push the button, how controversial are these changes?

The statute that set up the NSC also provided for two subcommittees, one on Foreign Intelligence and the other on Transnational Threats. But in 1989, President George H.W. Bush created a new subcommittee, the Principals Committee. He did this by what is called a National Security Directive. Every president since then has appointed a Principals Committee. This subcommittee to the NSC functions as "the senior interagency forum for consideration of policy issues affecting national security." Fortune reported that this committee is "often the final step where policy is shaped before being presented to the president for sign-off." So, its membership is a BFD.

Every president since Papa Bush has tweaked the committee membership — but there are some constants: The chair has always been the National Security Advisor. The Secretaries of State and Defense have always had a seat at the table. With the exception of President Clinton, the Chief of Staff has been on the committee. (So, Reince Priebus’s appointment should not be a surprise.)

But as to Trump’s committee membership, there are some shockers. First, there has never been a “Chief Strategist” on the Principals Committee. This indicates a politicization never seen before. Second, before Trump, every president but one has included the CIA Director or, more recently, the DNI and the Chairman of the Joint Chiefs of Staff on the committee. One guess as to that president. Yep, you’re right: W, who removed them from the Principals Committee in one of his first acts in the White House, stating that they “shall attend where issues pertaining to their responsibilities and expertise are to be discussed.” I guess that “Bin Laden Determined To Strike in US” didn’t constitute an “issue[ ] pertaining to their responsibilities and expertise,” at least as far as the scheduling secretary was concerned.

What we have here is a recipe for disaster. A know-nothing ideologue in the place of the (relatively) knowledgeable experts, and a president who can’t pay attention for more than five minutes at a time. Given what various Trump people have stated, I can imagine the worst of W’s decisions: black sites, torture, pillaging the natural resources of an ally. Those are, I guess, known unknowns. More frightening are the unknown unknowns.

Have a great day!

Mary Brigid McManamon is a Professor of Law at Delaware Law School. Nobody tell her she's writing for Wonkette.