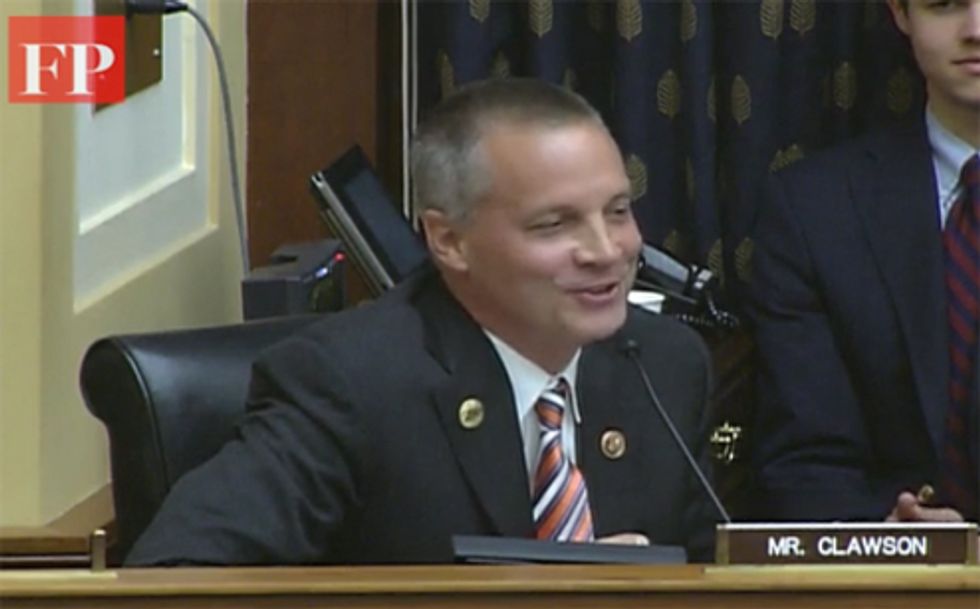 Curt Clawson, the Tea Party doofus who replacedcoke-fueled cokehead Trey Radel, is doing his best to preserve Florida's reputation. At a House Foreign Affairs Committee hearing Thursday, he mistook two senior U.S. government officials for Indian diplomats, because they're brown and have those funny foreign names, and went on at great length about how cool he thinks India is before expressing his hope that our two countries will continue to have good relations. That's one way to get name recognition, we suppose.

The two officials, Nisha Biswal and Arun Kumar, are Americans who hold senior positions at the State Department and Commerce Department, respectively. Although both Biswal and Kumar were introduced as U.S. officials by the chairman of the Asia and Pacific subcommittee, Clawson repeatedly asked them questions about "your country" and "your government," in reference to the state of India.

And oh, what a glorious hash of embarrassing, condescending moronicity Clawson did spout:

"I'm familiar with your country; I love your country," the Florida Republican said. "Anything I can do to make the relationship with India better, I'm willing and enthusiastic about doing so." [...]

"Just as your capital is welcome here to produce good-paying jobs in the U.S., I'd like our capital to be welcome there," he said. "I ask cooperation and commitment and priority from your government in so doing. Can I have that?"

Way to stand up for American jobs and American capital! To two American bureauacrats with brown skin and durka-durka names.

Rather than giving Clawson the deeply sarcastic reply his comments deserved, Ms. Biswal answered with all the diplomacy that her job at the State Department prepared her for:

"I think your question is to the Indian government," Biswal said. "We certainly share your sentiment, and we certainly will advocate that on behalf of the U.S."

She probably never imagined she'd need to be prepared for diplomatic negotiations with Florida.

Second-Best part: Clawson didn't even get what she was saying, and said, very satisfied with how he'd stood up for 'Merica, "Of course. OK. Let’s see some progress.”

Here is the video; we know some of you don't watch the videos but for godssake watch this one. It's only 44 excruciating seconds.

You may want to rewind to catch the absolute best moment, which is easy to miss since it happens while Ms. Biswal is talking: It's Arun Kumar from Commerce, doing his best at the 33-second mark to keep from laughing out loud at the complete stupidity of the situation. Again, kudos to two professionals for not just rolling their eyes and asking, "Are you fucking kidding me?"

Foreign Policy notes that after they repeatedly attempted to contact Clawson's office for comment, with no success, Clawson did apologize in a statement to USA Today, saying only,

“I made a mistake in speaking before being fully briefed and I apologize. I’m a quick study, but in this case I shot an air ball.”

It would have been great if he'd then explained that an "air ball" is an unsuccessful attempt to score in the American game of baskets-ball, which you may have heard is a very popular sport in our country.