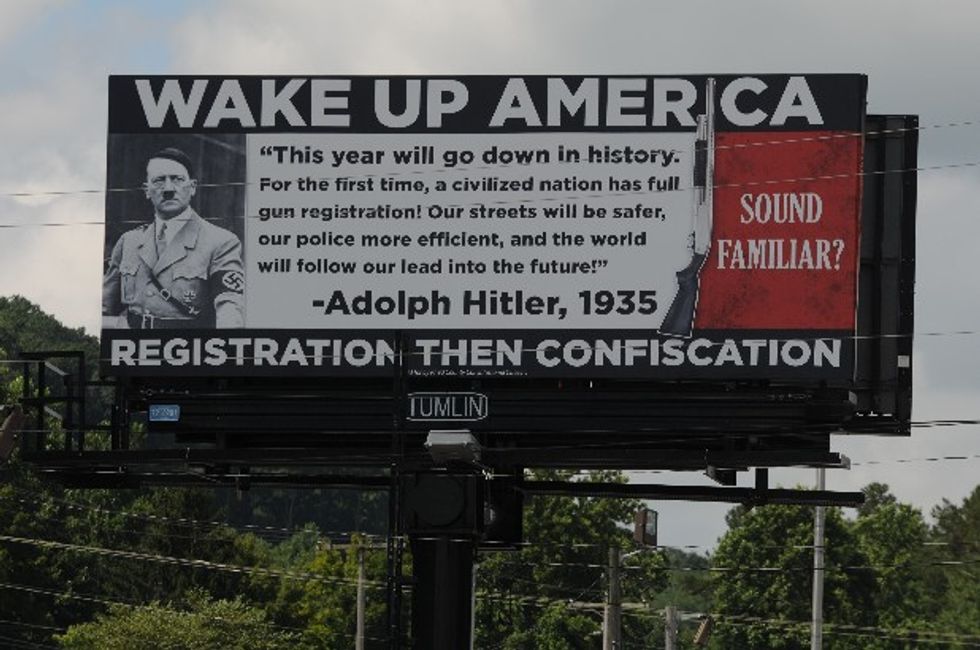 This is sad you guys. Some smug idiots in Dayton, Tennessee, put up a billboard about how Adolf Hitler loooooved gun control, loved it so much he wanted to get it pregnant with Gay Hitler (redundant!!!1!) babies, because gun control is how you kill all the Jews, everyone knows that, and they are like "up your nose with a rubber hose, LIBERALS! Suck on our peni of death!"

And then some dumb newspaper reporter (probably a Jew, knowing them) was all nerdazoid and like "er, pardon me fellows, but you seem to have printed a falsehood on your giant billboard devoted to explaining how keeping children from murdering themselves with guns is the same as murdering people in a cloud of Zyklon B, as your humorous and ironic juxtaposition of a seemingly benign quote and the fact that it came from Adolf Hitler is belied by the fact that it is an urban legend, Hitler never said it and was not for gun control and in fact significantly relaxed the Weimar Republik's stringent weapon regulations, and you seem, in scientific parlance, to have your head up your asses."

And then they shoved his head in a toilet and drowned him to death for being such a fag.

Who was that guy who said if you kept repeating a Big Lie, it would become a Fact? Man, it's on the tip of our tongue.

"This year will go down in history. For the first time, a civilized nation has full gun registration! Our streets will be safer, our police more efficient, and the world will follow our lead into the future!" the billboard reads.

"Sound familiar?" it asks. "Wake up America. Registration then confiscation."

Trouble is, Hitler apparently never said what the billboard claims he said.

Perhaps you would like to add some more Nerd Science?

The Skeptical Libertarian Blog states that the Weimar Republic established in Germany after World War I almost completely banned private gun ownership. Its strict laws were "designed to disarm the Nazis and Communists who were shooting each other in the streets."

"It wasn't until 1928 that the prohibition was lifted and a strict registration program imposed -- all prior to the Nazi takeover," the website states.

A 1938 Nazi government law prohibited Jews from owning guns, "but simultaneously liberalized gun restrictions for most everyone else. The law totally deregulated the sale of rifles, shotguns and ammunition," the blog states.

"It's utterly implausible that Hitler would have been praising laws by the previous administration to disarm his Brown Shirts and counter his revolutionary ambitions," the Skeptical Libertarian Blog said.

Oh well. At least they managed to find a real picture of Hitler.