The Snake Oil Bulletin: Let's Give Each Other Bleach Enemas, In Our Butts! 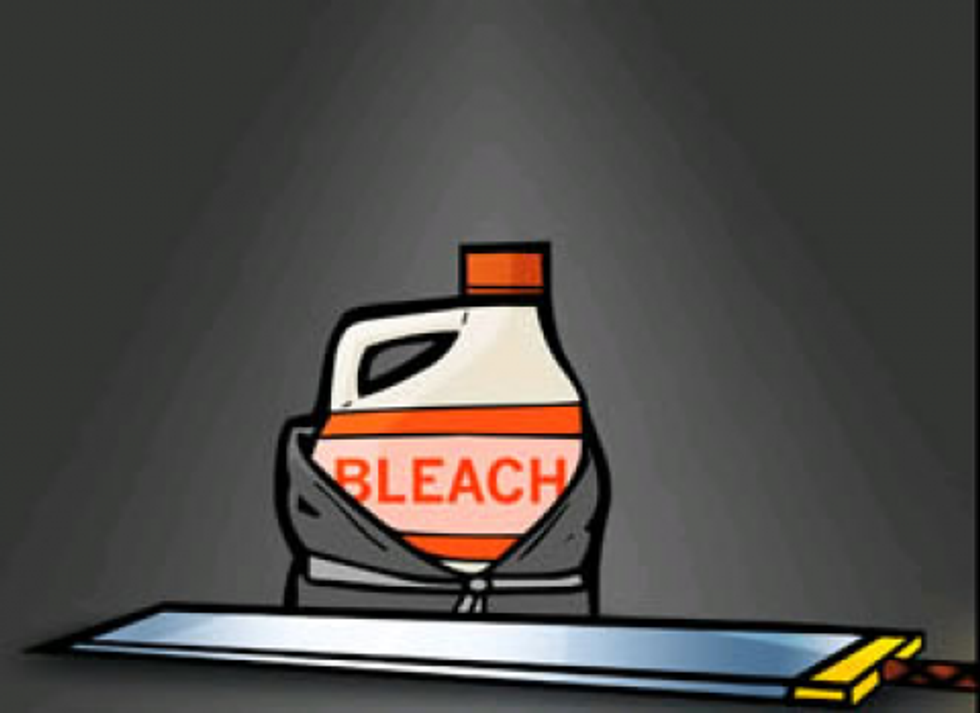 Ladies, Gentlemen, and Otherwise, welcome back to the Snake Oil Bulletin, the weekly compendium of codswallop and fiddle-faddle guaranteed to make your stomach quease and your palm rocket straight to your face. Should we do a story on bleach enemas this week? Yes, yes we should. Hope you got your Clorox fan memorabilia all set for this week, because the butt bleachers are back to make your derriere squeaky clean and your stomach churn with joy!

The world of bleach enemas stretches far and wide (heh), and this week we'd like to introduce you to Kerri Rivera, Bleach Enema Priestess. If Pastor Jim Humble is the God of the bleach enema cabal (which is easy because he actually claims to be a billion-year-old god from the Andromeda galaxy), think of Ms. Rivera as his Prophet, here to spread his message across the lands, preach the good news of rebirth through bleach, and then conveniently skip town when shit gets real with The Law. Rivera has been extolling the virtues of the Miracle Mineral Solution (MMS) for years, claiming that a mixture of chlorine dioxide drank or injected into the keister is the cure for cancer, malaria, AIDS, and -- perhaps most sinisterly -- childhood autism. It's for this literally incredible not-medical advice that Rivera left the US to go hide out in Mexico, rarely making US appearances because Jesus fuck this lady is crazy.

Rivera claims to have "cured" 170 children of their autism with repeated bleach drinking and bleach baths, kind of like how you can "cure" someone of their left-handedness if you beat them hard enough. Rivera contends that autism and various diseases come from intestinal parasites, and the fact that children on the MMS treatment expel long tendrils of something from their butts is evidence that these parasites are present. No one explained to Rivera what mucosa is, because that's what these child abuse victims are shitting out -- their freaking intestinal linings. But calm down guys, it's cool! As Rivera herself noted in an interview:

“If, in fact, chlorine dioxide were this toxic poisonous bleach – there would be a sea of dead children,” Rivera said. “How can this be bad if people are healing and nobody’s dying?”

How can something be bad for you if it doesn't murder you right away? Duh, people! What would that crummy EPA know with their studies showing "chronic exposure to small doses of chlorine dioxide can result in reproductive and neurodevelopmental damage"? That's not even a thing probably, like jet fuel melting steel beams!

Just this week, Kerri Rivera decided to touch down on US soil once more, striding across this great land, preaching the Gospel of Bleach for all to hear, or at the very least for the few dozen at the Loew's O'Hare Hotel Rosemont in Chicago at the AutismOne conference. Rivera's appearance on May 21st was a rare opportunity for disciples of her child reproductive and neurodevelopmental damage cult to see their Prophet in person, what with that whole "the FDA is probably monitoring this mess" look she has going for her.

Unfortunately for Rivera, activists led a group to protest the already shady conference and to inform people of exactly what it is that a certified homeopath like Kerri (of course she is) is advocating. Even hotel employees got behind the protesters because of how appalling this crap is, and that's saying something considering the Loew's hotel hosts this AutismOne quack conference every year. These people put up with anti-vaxxers once a year, but bleaching an autistic kid is too far.

Regrettably, the conference went off without a hitch and only a few calls to security (most of whom responded to the protesters with arched eyebrows and silence) before Rivera spirited her enlightened self back across the border inflict her message on the people of Mexico. She was probably a little spooked by our next story coming down the pike.

In some good news on the War on Bleach, we have a follow-up on a previous story, the trial of con artist kid-bleacher Louis Daniel Smith. Smith was indicted a few months ago for smuggling in sodium chlorite, which goes by the happenin' street name of "an industrial chemical used as a pesticide and for hydraulic fracking and wastewater treatment," and selling it to unsuspecting rubes as a cure-all as part of the Miracle Mineral Solution (MMS). He not only encouraged people to drink this stuff, but urged them to feed it to their kids as a daily supplement in lieu of delicious Flintstones vitamins, and not just for autism either! Thankfully, in an amazing twist for anyone who is generally against killing children, the fucker's been convicted! Hallelujah!

The DOJ's press release reads less like a conviction notice and more like a carnival of horrors, and not the fun kind with the happy clowns with razors for teeth:

The government presented evidence that Smith instructed consumers to combine MMS with citric acid to create chlorine dioxide, add water and drink the resulting mixture to cure numerous illnesses. Chlorine dioxide is a potent agent used to bleach textiles, among other industrial applications.  Chlorine dioxide is a severe respiratory and eye irritant that can cause nausea, diarrhea and dehydration.  According to the instructions for use that Smith provided with his product, nausea, diarrhea and vomiting were all signs that the miracle cure was working.  The instructions also stated that despite a risk of possible brain damage, the product might still be appropriate for pregnant women or infants who were seriously ill.

If you wanted to turn into a misanthrope right about now, we would probably join you.

The FDA convinced a federal jury to convict Smith of 3 counts of introducing misbranded drugs, 1 count of fraudulently smuggling merchandise into the country, and 1 count of conspiracy to commit multiple crimes. According to the prosecution, Smith set up a bunch of bogus chemical treatment companies in order to smuggle his industrial chemicals into the country by deviously calling them industrial chemicals, which is what they are. Industrial fucking chemicals.

Smith now faces a maximum of 34 years in jail, and in your humble correspondent's opinion it couldn't have happened to a nicer human-shaped herpes scab. Looks like that fancy GoFundMe page wasn't enough to save a man committed to burning children from the inside out. Money really can't buy everything.

Last, we'll wrap up our bulletin with a look back at the greatest pieces of jiggery-pokery to grace the pages of Yr Beloved Wonkette.

That's all for this week, folks. Tune in next time when our guests, Bloody Mary and Biggie Smalls, will tell us their secrets to shaping up for bikini season! Spoiler alert: it's BLOOD.