Sniffle-Britches Donald Trump Obviously Dying Of Something, But What Could It Be? 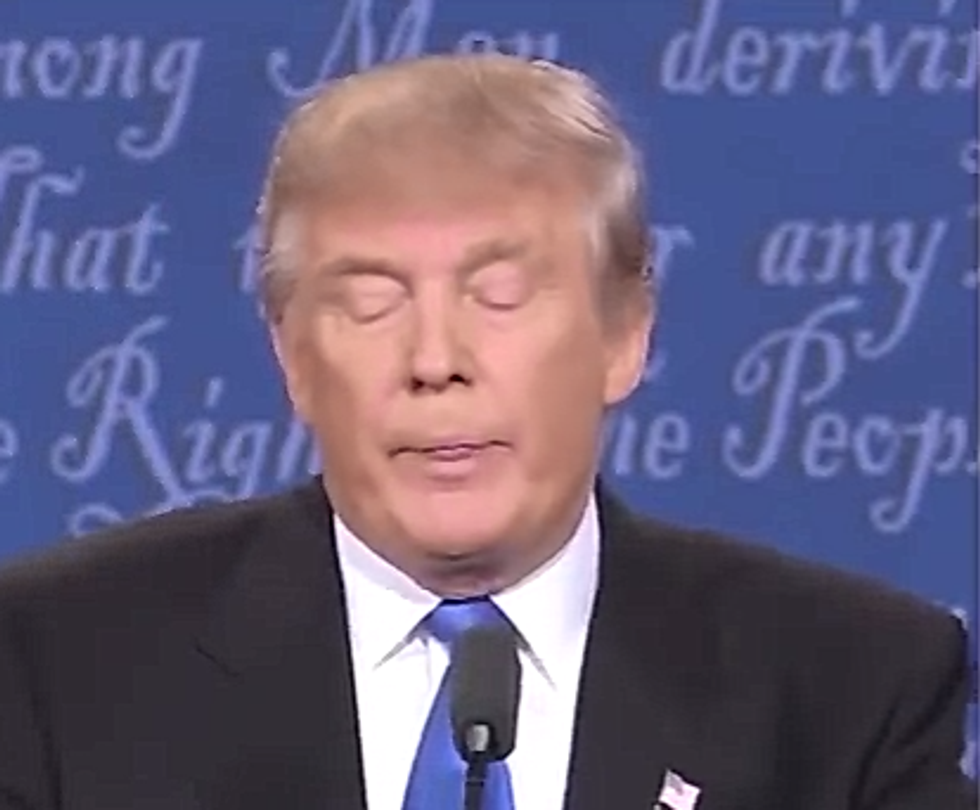 Donald Trump makes this face when he has a 'faulty mic.'

One of the most difficult things about watching Monday night's presidential debate was how every three seconds Donald Trump was like HONK! and SNORT! and SNIFFLE! and sucking gnarly mucus bits up inside his brain. Like, has somebody checked on his health lately? Because for a man of his age, who, according to Dr. Oz, is kinda porky, and whose skin is so thin you can practically see all the weak, disgusting organs inside his icky wrinkle body, those sniffles could mean something. Something BIG.

Trump tried to explain it all away on "Fox & Friends," like a common Hillary:

No, no sniffles. You know, the mic was very bad, but maybe it was good enough to hear breathing," Trump said on Fox & Friends Tuesday morning. "But no sniffles. No cold."

Earlier on the Fox show, Trump even suggested that someone had purposely tampered with his microphone.

"I had a problem with a mic that didn't work. My mic was terrible. I wonder if it was set up that way on purpose," he said. "I don't want to believe in conspiracy theories, of course."

Yes you do, you stupid birther.

Anyway, let's judge for ourselves how much Trump is dying right now, of sniffles:

Yeah, we're pretty sure Trump is hiding something in his tiny hands, and that something has to be major medical problems. We visited our old pals at WebMD and used the symptom checker to find out what Trump is dying of. First you have to say whether you are a boy or a girl ("boy") and how old you are (we picked "way too ancient and crusty to be president, that's for sure!") And then you put in your symptoms, and for Trump we picked "runny nose," "drainage or pus," "difficulty breathing" and "noisy breathing." Now you might think, c'mon Wonkette, do you really think Trump had PUS coming out of his failed brain? We think it's a possibility! We don't know what's inside Trump's body, and neither do you.

According to the real doctors, this could mean many things! Oh, there are the normal things, like acute sinusitis, common cold and indoor allergens. Maybe the liar Trump was just having an allergic reaction to all the #truth Hillary was spewing in his general direction! But there are some more serious possibilities, like "foreign object in the nose." HMMMMM, what could be sticked up in Trump's sad nose? His dignity? Hillary's foot? His tax returns that show he's not as rich as he'd like us to believe?

It really could be cocaine. That's kind of how common cokeheads sniffle. And Trump was up alllllll night tweeting, maybe because of the cocaine. Does Donald Trump snort drugs? WE DON'T KNOW, WE ARE JUST ASKING.

Another possibility WebMD suggests is West Nile Virus. DOES DONALD TRUMP DO COCAINE WITH INFECTED MOSQUITOES? Sorry, don't mind us, just trying to do some journalism here.

[wonkbar]<a href="http://wonkette.com/605279/what-is-hillary-clinton-dying-from-today"></a>[/wonkbar]And speaking of journalism, we'd hate to treat this any less seriously than the chairborne, paste-eating "medical experts" who are always trying to solve the "conspiracy" behind Hillary Clinton's health. So we need to consider some other options, of what Trump is hiding.

Is he already scouting for wife number four, with his (allegedly!) shriveled ding-dong? Maybe he's been sniffling around the wrong ladies, and has gotten himself an STI that causes cocaine sniffles. COULD HAPPEN! Hey Donald? We promise they make dick-wrappers in your size, even if you have to special order them.

Or maybe, like Hillary, he is concealing Parkinson's or Down syndrome or epilepsy, and the only way he masks the symptoms is by sniffling like a coke addict with pollen allergies.

[wonkbar]<a href="http://wonkette.com/606985/hillary-clintons-temperament-cant-stop-giggling-at-unhinged-man-baby-donald-trump"></a>[/wonkbar]OR MAYBE all his loud sniffling is actually what it sounds like when Trump cries, but his beady little eyes can't produce tears, because he has a problem with his tear ducts, or maybe he just doesn't have a soul. WAS THE BIG PUSSY SNIFFLE-SOBBING BECAUSE THE MEAN LADY HILLARY GIGGLED AT HIM?

Good gracious, we could just go on for days, trying to figure out what's ailing Frail Little Donald so, but we just remembered we don't fucking care. RELEASE THE LONGFORM MEDICAL RECORDS, DIPSHIT.