So Who Else Got Shot By Cops This Weekend? And Who Said Stupid Sh*t About it? 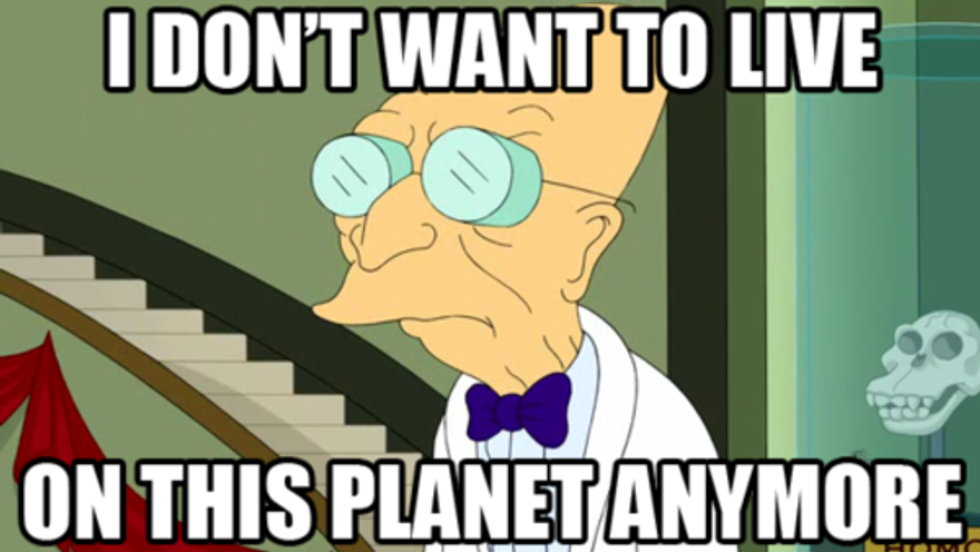 Well dear Christ, what a fine little roundup of horrors we have for you this time. Please provide your own kittens.

In Houston early Saturday morning, police shot a black man, Alva Braziel, who was standing in a four-way intersection holding a gun and pointing it at the sky. Here's WaPo's reporting on the story:

According to the Houston Police Department, two officers who were on a routine neighborhood patrol found a man at a four-way intersection in South Houston with a gun pointed toward the sky. The officers left their vehicle and approached the man, telling him to lower the gun. A witness also yelled at him to lower the weapon.

Police say the man then slowly lowered the weapon and pointed it at the officers.

“Since it was a slow, deliberate movement, for their own safety and witnesses’ safety at that point, the officers discharged their weapons more than one time,” said Jodi Silva, a spokeswoman for the Houston police.

That would actually be ten shots. Which is more than one. Ah, but of course there's video which may suggest otherwise; it appears to show Braziel putting his hands in the air, then standing still briefly before being shot.

Appears to have his hands up right before being shot 10 times by the Houston Police late Friday night.https://t.co/rzi6azCAPv

Unfortunately, it's cell phone video of a security cam recording. To make matters worse, a support beam for the gas station roof partly obscures the view, and the person operating the cell phone moves the phone, trying to zoom in, just before the shooting. For fuckssake, if you have the security cam video, why not make a second recording that doesn't bounce around at the crucial moment? Even so, it sure looks to us like the guy has his hands in the air. We don't see a gun, although comments on the Twitter post containing the video claim one is visible at the 36-38 second point. Yet another grainy video becomes a national Rorschach test.

ThinkProgress notes "Both officers involved reportedly had body cameras on them, but the footage has not yet been released." We haven't seen any information on how the gas station surveillance video made it to the internet. The Houston Chronicle reports Braziel was out looking for a stolen horse at 12:40 a.m., and that because he had felony convictions, he shouldn't have been carrying a gun at all, not that the police knew any of that in the 10 seconds or so they took between arriving on the scene and shooting him dead. Eventually, the dash and body cam video may clarify all this. Unless all the devices stopped working, which happens a lot these days.

On Monday's New Day program on the CNN, former NYPD detective Harry Houck did his part to explain why black people keep finding themselves in the way of police officers' bullets: Obviously, The Blacks make up a demographically disproportionate percentage of the prison population not because racism is real, but because blacks are natural born criminals. You see, nobody's brave enough to say that except Houck and all the loudest white-power fuckdrippings on the internet. You see, Houck had a piece of paper with statistics showing blacks commit more crimes than whites in New York City:

CNN commentator Mark Lamont Hill pointed out that an investigation in Ferguson, Missouri, found that there was “considerable evidence of racism” in the police department.

“Well, they are!” Houck replied.

“You are interpreting something else into what I’m saying into your narrative!” Houck yelled back. “That’s what you do!”

Houck had his paper, though, and kept yelling "75 Percent!" the loudest, so we guess he wins. Sorry, black people, you are mostly criminals. It's been proven on CNN.

The shooting in this one is from way back in ancient history, last Monday, July 4, but the newly released video only came out this weekend, so it counts. According to the first reporting on the shooting in the New York Post, Delrawn “Smalls” Dempsey, a black man with a history of multiple offenses, became road ragey at an off-duty NYPD cop, Wayne Isaacs, after Isaacs supposedly cut Dempsey off in traffic. According to unnamed sources, after chasing Isaacs through traffic, an enraged Dempsey got out of his car and attacked Isaacs. In a later story, a witness claimed to have video showing Dempsey brutally attacking Isaacs (we've restored the cussin' to its original glory, because we are not the New York Post):

“The video shows the guy coming out of his fucking car, running up to [the cop’s] car, going in the driver’s-side window and just punching the shit of this poor cop. Then all of a sudden you see sparks,” he said, adding that the next image is of Small hitting the pavement.

He added that Small “was wailing on [Isaacs’] face, like ‘pow, pow!’ He was looking to knock this guy out, punching and punching. Maybe four punches.

“It was big haymakers.”

Isaacs simply had no choice but to shoot Dempsey, at least in the first Post story:

After he was struck in the face and head numerous times, the cop, fearing for his life, pulled out his weapon and fired three times, striking Dempsey at least once in the chest, sources added.

Oh, but then surveillance video from a nearby store was released, which showed no assault at all on Isaacs. Instead, we see Dempsey cross traffic and walk up to Isaac's car -- aggressively, maybe? -- then fall dead after being shot.

Dempsey does touch Isaac's car -- as he's staggering after being shot and Isaacs starts driving away. Then Dempsey falls dead between two parked cars. Suddenly, the New York Post is describing things a bit differently:

He barely has time to look the cop in the eye or even utter a word before Isaacs opens fire, causing him to stagger back.

He stumbles to the ground, gets up for a moment and then collapses again for good.

Isaacs, meanwhile, lurches his car forward a few feet before slamming on the brakes and getting out. He appears to tuck the gun into his waistband as he walks over toward Small.

Isaacs looks in the direction of the dying man, pausing for a few moments near his body, before returning to his vehicle.

Huh. That source with the video of Dempsey punching the shit out of the cop had better come forward pretty soon so we can compare the footage. And of course, it should go without saying that road rage is never smart, and with all the armed lunatics out there just waiting for their chance to go Second Amendment on somebody, getting out of your car to confront another driver is a terrible idea. But we'd also add that road rage isn't a capital crime -- at least not until President Trump revises the criminal code -- and maybe a police officer is supposed to show more restraint in using deadly force than the average armed moron?

Nahhh -- Delrawn Dempsey had a criminal record, so that's a good enough reason to kill him. There's still the possibility Isaacs might face charges, since after Eric Garner's death, New York State Attorney General Eric Schneiderman was appointed as special prosecutor to investigate police killings of civilians. The Daily Beast even managed to find its own unidentified New York law-enforcement official who was willing to say, anonymously, that things didn't look great for Isaacs:

“The point is it’s almost instantaneous, it in no way appears to be life-or-death. The officer just doesn’t seem to be justified in his reaction,” the official said. “Again there’s no car in front of him as far as you can see so it’s not like he can’t roll up the window and drive so yeah it doesn’t look good.”

Maybe you need to slow it way down to see all the punches Dempsey threw.

Rudy Giuliani Has Thoughts On Black Lives. They Do Not Matter

Giuliani also said black people listen to rap music that praises killing cops, and also there are a lot of black people who shoot each other, so complaining about police shooting black people is hypocritical. Then somewhere a liberal yelled "Bingo!" and excitedly held up a card with all the racist clichés covered.

[A] central tenet of what I’ve learned is that the core of what ails black people about racism, and what makes most black people think of racism as defining black existence in America, is a fear of being senselessly cut down by the police. (This is still true after the Dallas tragedy.)

Get ready for some idiot -- almost certainly a white idiot, although Allen West may say it too -- to condemn McWhorter's "racism" and "hatred of cops." They'll have to dismiss McWhorter's saying this:

The point, clearly, isn’t to be anti-cop. That police were gunned down last week in the midst of a peaceful protest is sickening. Their lives mattered, too.

Which of course is what they will do, so the hell with 'em. It's hard to disagree with McWhorter when he argues,

The point, rather, is that police violence is not just one of many issues in black America’s take on racism: It is the central one. If it were no longer a regular occurrence for black men to be killed for no reason, that would furnish the grounds for the “get over it” orientation that many wish black America would adopt.

On the other hand, neither McWhorter nor Scalzi mentions "black-on-black crime," so maybe we should scream about that instead and ignore cops killing black people.