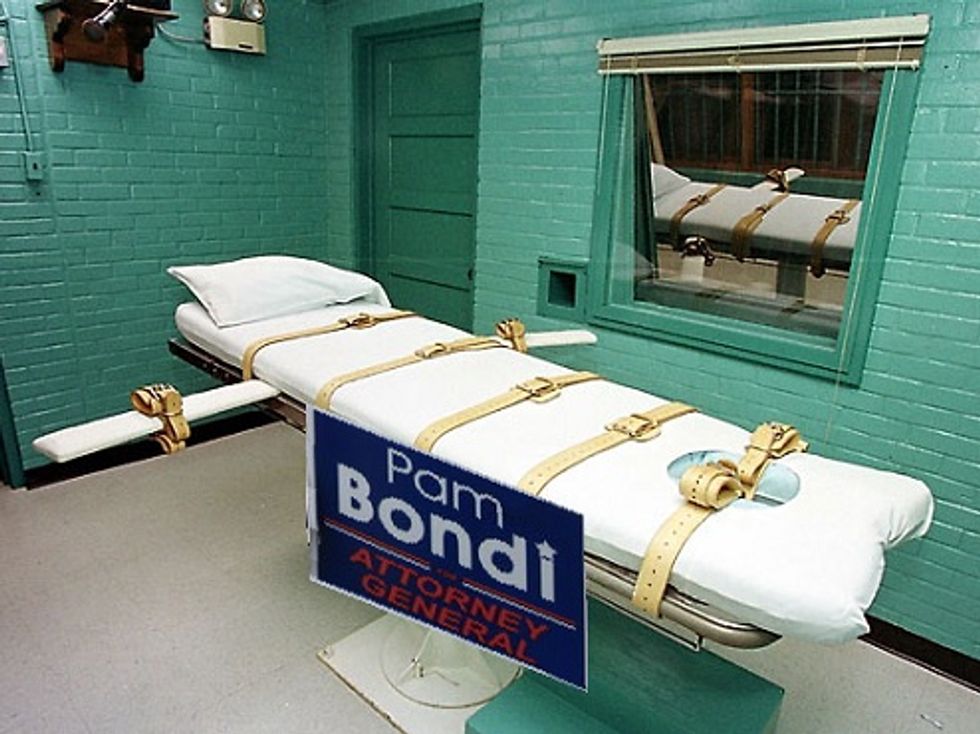 Really, there are some days when Yr Wonkette is just tempted to run a headline that says nothing more than "Florida WTF?" but we would then have an awfully hard telling one instance from another, particularly since Florida has more different flavors of WTF than Sarah Palin has varieties of sexy poutface. All of which is to lead intoMonday's fine Sunshine State story:

Attorney General Pam Bondi persuaded Gov. Rick Scott to postpone an execution scheduled for tonight because it conflicted with her re-election kick-off reception.

We aren't even sure if there's anything more to be said beyond that; the thing in itself is such pure political derp that we fear tainting it by going into detail. And yet, we must.

Gov. Scott approved the delay last month, although he said on Monday

that he did not know the reason for the request, and he declined to answer when asked whether he considers a campaign fundraiser an appropriate reason to reschedule an execution.

"When another Cabinet officer asks for something, we try to work with them," Scott said.

It's awfully considerate of him, really. And it's not like executions don't get delayed for other reasons; in this case, the inmate, Marshall Lee Gore, who was sentenced to death for brutally murdering two women in 1988, had his execution delayed for a hearing in August that decided that he was "sane enough" to be put to death. Following that hearing, Gore's execution was rescheduled for September 10, but that turned out to be the same date as Bondi's "hometown campaign kickoff" party which, we would just like to point out, Bondi had already called dibs on.

For her part, Bondi now calls the request to reschedule a "mistake":

"As a prosecutor, there was nothing more important than seeing justice done, especially when it came to the unconscionable act of murder. I personally put two people on death row and, as Attorney General, have already participated in eight executions since I took office, a role I take very seriously," Bondi said.

"The planned execution of Marshall Lee Gore had already been stayed twice by the courts, and we absolutely should not have requested that the date of the execution be moved," said Bondi, who has long championed victims' rights.

So, hey, she's learned her lesson, Gore will still get his lethal injection on October 1 (the Florida Department of Corrections says it will cost the state an extra $1000 to keep him alive on Death Row that long). And if Bondi successfully defends against legal challenges to the state's "Timely Justice Act" -- which will "streamline" the appeals process in capital cases -- then Florida can get the execution assembly line moving more quickly, hurrah!

Gov. Rick Scott, incidentally, will not be able to attend Gore's newly rescheduled execution on Oct. 1, because he will be attending a fundraising event in Broward County for his 2014 reelection campaign.