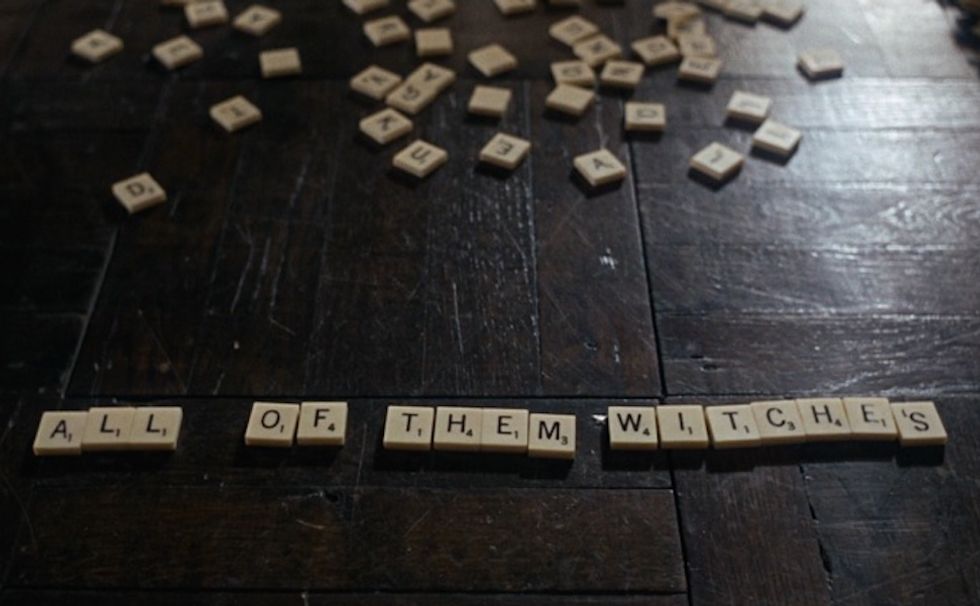 Happy day after Halloween, Wonkers! What did you go as this year? I went as a MUUUUUURDEROUS Angela Lansbury, fresh off a killing spree in Cabot's Cove, because obviously I am very into the whole sexy Halloween thing. Of course, like many other liberals, one of my favorite spooOOOOooky Halloween activities is doing witchcraft to conservatives and making their brains foggy.

Of course, never did I think anyone on the other side would find out about these nefarious activities -- but alas, Lance Wallnau is ONTO US. In an appearance on The Jim Bakker Show, Wallnau (who calls himself a "catalytic thought leader," which does not seem like a real thing), told everyone all about our secret plans to release spirits into the world for the purpose of confusing conservatives.

The web literally is coming down on America. And what’s sad is, how many Christians feel this fog on their head at times? Do you feel that? It’s almost like everything’s going wrong. We don’t realize it’s a remnant operating strategically through organizations that are intent on shifting the American culture and discipling the country. And that fog that’s on Christians is the collective witchcraft that comes over the Body of Christ because there’s spirits being authorized to be released.

Wherever there’s agreement, there’s power. The more unbelievers agree with the narrative that they’re hearing, the more power and authorization Satan has to manifest. So unless the church has an exposure of what the enemy’s doing and begins to agree together with a counter-strategy, we’re going to deal with more and more fog. And the worst part is—we don’t have to surrender nations to the devil.

So yeah. Now the next time some nice conservative goes over to the fridge and can't remember what he went their for, guess who's gonna be blamed? Us, probably. Jim Bakker will trip over a crack in the sidewalk because he wasn't paying attention while walking, and the next thing you know, it'll be Salem all over again.

Wallnau stated earlier this week that God came to him recently and told him that he was using Donald Trump as a "Miley Cyrus Wrecking Ball" against the Satanic influences of the Left. Which was just spooooooky because he had not actually ever heard of Miley Cyrus OR her Wrecking Ball before God came and told him about it. God, apparently, is very upset about political correctness, as he would never, ever tell people what not to say. Donald Trump, he says, is the only man God thinks can step in and destroy this witchcraft web that is destroying our country and letting Satan in.

This "web" he speaks of -- the one causing the fog -- is a group of "interdependent organizations" (covens?) that use witchcraft of some kind to make people think that racism and rape are "problems" of some kind.

“They are all independent organizations coordinated by one group of people like us who handle the money. So they’ll show up where there’s race issues—boom, and make them inflammatory. They’ll show up where there’s a campus issue—boom, and make it inflammatory. Then the media machine kicks in, Media Matters, which is run by one of their organizations, and they come in and they get it into the social media channels so it’s in Facebook and everything. And you would think all of America’s ablaze. It’s a handful of funded, executed strategists with entities called 527s that are discipling America.”

So, I guess what he is saying is that instead of sacrificing babies to Satan or giving our pregnant neighbors tannis root smoothies, what we modern witches are up to these days is putting spells on the whole country, via Facebook, trying to convince them that racism and rape are some kinda big deals or something. So every time someone says "Hey! Maybe cops should kill black people less!" or "It's probably a good idea to check with a woman before you go ahead and stick your dick in her or grab her by the pussy!" another demon gets released into the world? And then, because we are doing that, Christians feel foggy? I think?

Personally, I'm kind of into it. It's at least a lot less messy than bothering with eye of newt.