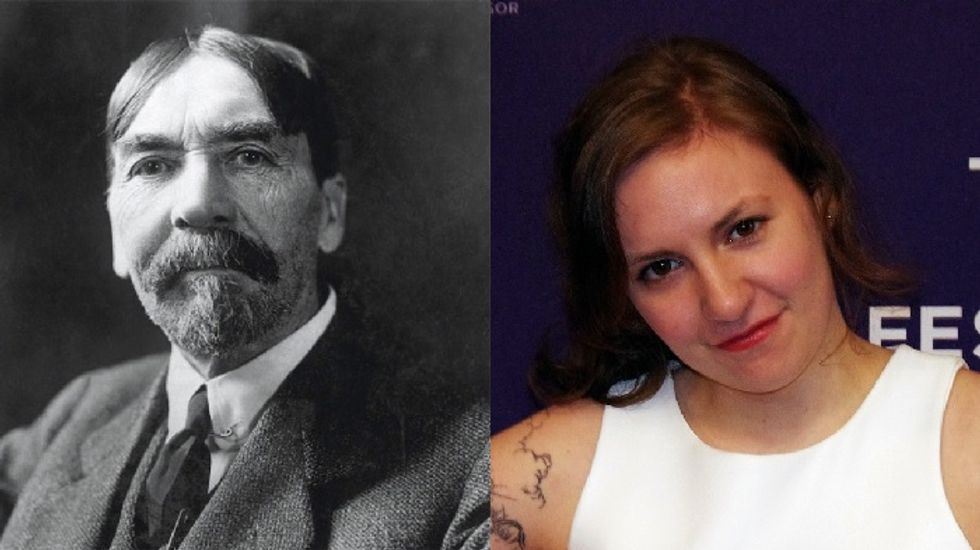 Usually, the "fake thing mistaken for real thing" stories we most often see result from some poor doofus getting taken in by a satirical fake-news (or just stupid fake-news) website, like that one congressman who thought the Onion's Abortionplex story was true, or the Defenders of Christmas who called for the head of a nonexistent teacher at a real school. This time, though, we bring you Kaleb's story of how he accidentally fooled some wingnuts into thinking that Lena Dunham's book Not That Kind of Girl included a passage on the excesses of capitalism.

A few days ago, Kaleb posted this very amusing tweet, in which he pretended that the star of HBO's Girls had written this paragraph from Thorstien Veblen's classic 1899 critique of the Gilded Age, The Theory of the Leisure Class:

I know almost nothing about Veblen; I just thought it was a funny way to say I don’t like rich people.

Obviously, Lena Dunham, who has chapters like “Take My Virginity (No, Really, Take It),” is not writing anything in the same universe as the Veblen quote, which critiques the cultural fallout of the Gilded Age while using words like “impinge” and “forfeiture” and “exigencies.” The joke made ten or so of my political science major friends smirk, which is all I thought it would do.

And then Kaleb's joke got retweeted by Instapundit, who is kind of dumb that way, and it started getting picked up by other conservative tweeters who then decided that Lena Dunham was a commie capitalism hater who can't write a coherent sentence (without actually noticing that she "wrote" in a pretty common style for a 19th century essayist).

And then somebody actually googled the passage and identified it as Veblen, after which a very angry conservablogger accused Kaleb of being totally unethical:

The blogger explained why making jokes is totes unethical. Kaleb DID A LIE and betrayed people who read the tweet:

They just assumed that Kaleb Horton was accurately quoting Dunham’s book. This was Twitter, after all, and most people don’t fact-check every tweet they read.

They made the mistake of trusting Horton to tell the truth, but he lied. That is a cardinal sin in journalism, or at least it used to be. Horton falsely attributed a quote by Veblen to Dunham, using his own credibility to sell the lie, then he mocked people for falling for it.

Yr Wonkette just wants to let Kaleb know that, as people who lie all the time and think it's "funny," we have his back. And if you Wonkers want to check out more of Kaleb's lies from the pit of hell, you can read his Happy Nice Time posts right here. Go! Read!

Also, if you're a fan of Thorstein Veblen (who incidentally coined the term "conspicuous consumption"), you should also check out John Maynard Keynes's foundational General Theory of Employment, Interest, and Money, which revolutionized economic theory with its analysis of the business cycle, and helped to bring the U.S. economy out of the Great Depression. We have always found this passage an especially piquant explanation of the salutary effects of deficit spending as a means of economic stimulus:

"Do you remember the hospital, Colton?" Sonja said.

A natural question popped into my head: "Colton, what did the angels look like?"

He chuckled at what seemed to be a memory. "Well, one of them looked like Grandpa Dennis, but it wasn't him, 'cause Grandpa Dennis has glasses." Then he grew serious. "Dad, Jesus had the angels sing to me because I was so scared. They made me feel better."

I glanced at Sonja again and saw that her mouth had dropped open. I turned back to Colton. "You mean Jesus was there?"

My little boy nodded as though reporting nothing more remarkable than seeing a ladybug in the front yard. "Yeah, Jesus was there."

"Well, where was Jesus?"

Colton looked me right in the eye. "I was sitting in Jesus' lap."

It's pretty much the most influential economic work of the 20th century.