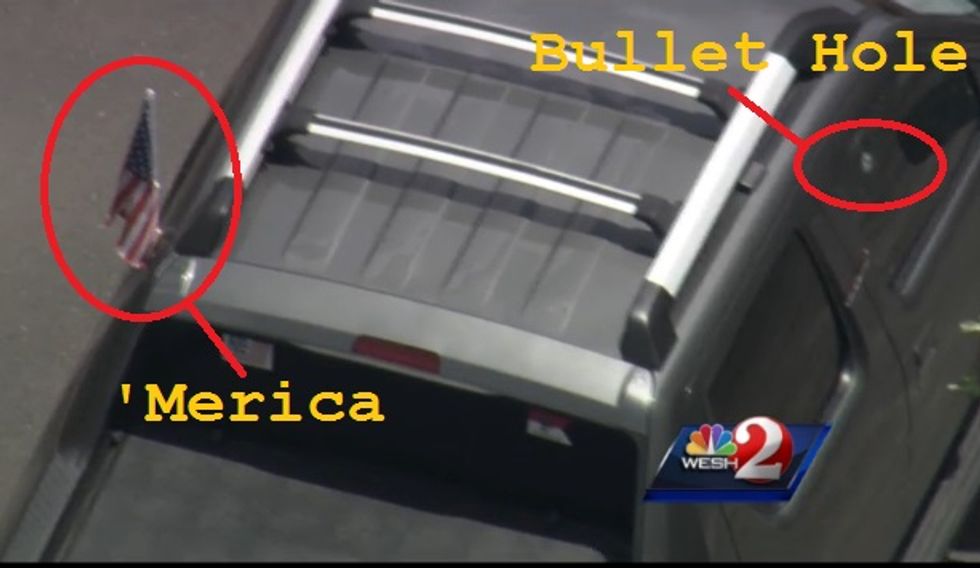 In breaking "Everyone saw This Coming" news, we learn that Second Amendment Hero George Zimmerman suffered minor injuries in a shooting incident Monday afternoon in Lake Mary, Florida. Lake Mary Police Chief Steve Bracknell said that Zimmerman was not badly hurt in the incident, which apparently involved Zimmerman and one other man. News video shot from a helicopter showed a bullet hole in the passenger-side window of Zimmerman's pickup.

In its most recent update, NBC affiliate WESH-2 added that Bracknell "said the shooting may have been related to an 'ongoing dispute' involving Zimmerman and another person." It's not clear whether Zimmerman fired any shots himself, but Yr Wonkette's betting line has money on "Are You Kidding? When Wouldn't George Zimmerman Get All Shooty?"

A witness said that Zimmerman was able to walk from his vehicle to an ambulance without assistance.

As you may recall, Chief Bracknell is officially Not A Fan of his city's most famous resident; after one of Zimmerman's other gun-waving incidents, Bracknell told a reporter for the Los Angeles Times,

“Man, it would be fantastic if you have an apartment out there [in Los Angeles] for George Zimmerman,” Bracknell, the police chief, told The Times. “This guy is killing me. We’re just a small-town police department — this really taxes us.”

We know virtually nothing else about what happened today, so it would be irresponsible not to speculate -- within the bounds of the Rules for Commenting Radicals, of course. Some possibilities:

Share your conspiracy theories in the comments, which we do not allow. Again, take a moment to re-familiarize yourself with the Rules, as we will be making liberal use of the Mallet of Loving Correction (™ and ® John Scalzi) for anyone wishing that the shooter had better aim. We don't wish death or mayhem on people, not even scummy teenager-killing scumbuckets, OK?