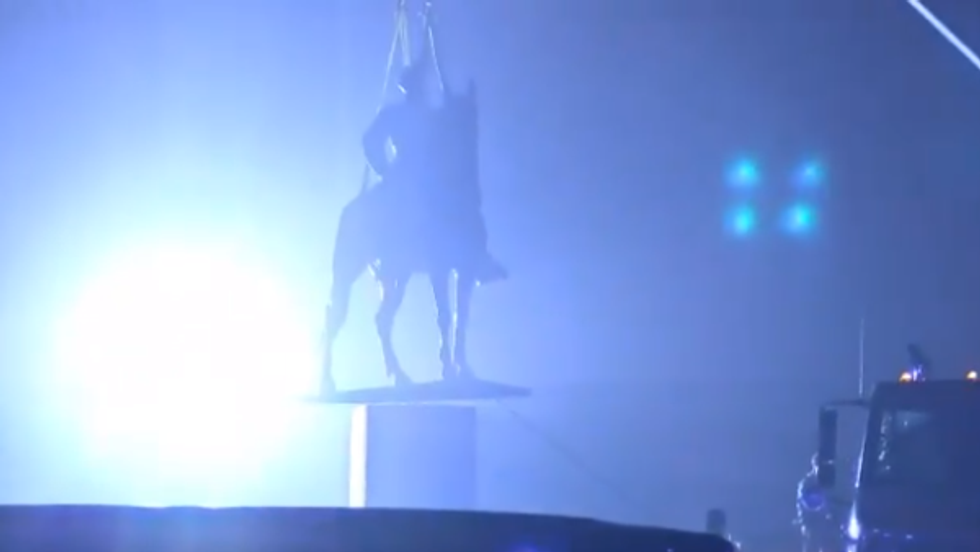 The moment Nathan Bedford Forrest was lifted from his place of honor and then removed from it.

Hi y'all, Memphis Wonkette here! When news broke early Wednesday evening that the Memphis City Council had just voted unanimously to remove the two nasty Confederate traitor loser statues sitting in two of our city parks (one of Nathan Bedford Forrest, which is also his grave site, and the other of Jefferson Davis, whose dumb bones are nowhere nearby), the immediate collective reaction was, "Wait huh? How they do that?"

We've had the same fights about monuments everybody else had, but Memphis had hit some unique snags. City Council voted in 2013 to knock the damn things down, but also in 2013, the Tennessee state legislature, which LOVES local government except for when "local government" does something it does not like, approved the Tennessee Heritage Protection Act, which is just exactly what it sounds like. You can't be taking down statues of precious Confederate traitor losers in Memphis because the state of Tennessee says that's a sin against HERITAGE NOT HATE.

But the fight raged on, led by a grassroots activist named Tami Sawyer, who created a group, #TakeEmDown901, that never lost sight of the ultimate goal. ("901" is Memphis's area code, and, um, we in Memphis are kind of in to that number.) Jim Strickland, the city's first white mayor since we cannot even remember, had insisted all along that he wanted the monuments gone, but he also insisted he wanted the process to be "legal," contra the wishes of those of us who wouldn't have given a damn if they had just dropped an anvil on the fucking things from outer space and apologized in the morning. Strickland had been petitioning the state for a waiver, but as of October, the state was ignoring him.

The process that played out Wednesday was indeed very legal, but it was also hilarious. State of Tennessee, you say we can't remove these fuckers from public land? OK fine, the city of Memphis just sold those two parks to a nonprofit for $1,000 a piece, which means they are now on private land, and HOLY SHIT HOW DID THOSE CRANES SHOW UP SO SOON, IMMEDIATELY AFTER THE CITY COUNCIL VOTE? It's like it was a coordinated plan!

How you like us now, racist Republican state lawmakers from middle and east Tennessee who don't pay any attention to Memphis any other day of the week? What's that? Sorry, Memphis cannot hear your sobbing over our triumphant giggles.

People flocked to the site of the Forrest statue, in the very sexxxily named "Health Sciences Park" (so called because they quit calling it "Forrest Park" a few years back and clearly never had a contest to rename it), and watched and cheered as the Memphis Police Department surrounded the area for the statue removal, because again, this shit was all very planned. It's just that most people weren't in on the plan. (Jefferson Davis was removed after they were finished with Forrest.)

In local online parts, the reaction was mixed. The city of Memphis is majority black and deep Democratic, but our TV viewing area includes surrounding areas, and some of the most vocal residents of "surrounding areas" are racists scared to set foot in Memphis, and who will tell you daily in the comments section of the newspaper or the TV station that they SURE ARE GLAD they got out of that HELLHOLE where you get MURDERED just for WALKING YOUR DOG. The general consensus among those folks was that they were not pleased to see their beloved white supremacist leader removed from his honored perch in the city they are scared of. (Oh, and some of them went apeshit about grave desecration, apparently not realizing Forrest's nasty bones were moved once before, in 1904, from their original spot in the historic Elmwood Cemetery. Also nothing happened to Forrest's actual grave last night, 'less somebody managed to piss on it when MPD wasn't looking.)

Others in the Channel 3 viewing area were very upset that WREG Channel 3 pre-empted broadcasting of the "Survivor" season finale to carry the statue removals live. We didn't want to spoiler it for them (yes we did), but you know who DIDN'T win on "Survivor" last night? That fuckin' Forrest statue, and also old Jeff Davis.

So now, the damn monuments are down, well ahead of the 50th anniversary of the assassination of Martin Luther King Jr., which happened a short drive away from the Health Sciences Park at the Lorraine Motel on April 4, 1968. It's a new day in Memphis, yes indeed.

Oh, and because this is how this town rolls, guess what time Nathan Bedford Forrest's dumb ass officially came down? That's right, it was 9:01 PM.

Told you we're kinda obsessed with that number around here.