Sorry, Kansas, But Gov. Brownback Has To Spend All Your Money Stopping Bortions 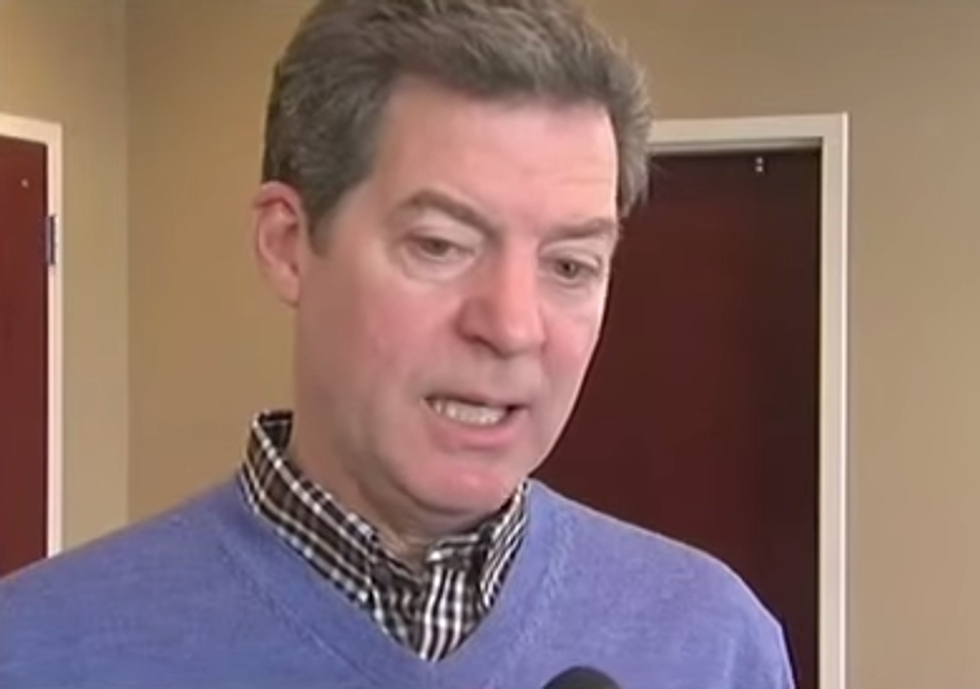 Who is absolutely THE WORST Republican governor in U.S. America? Oh all of 'em, Katie? Correct! But Kansas Gov. Sam Brownback is trying super hard to be even more THE WORST than all the others combined. As if it weren't bad enough that he bankrupted the state with tax cuts for the rich that work as well as unicorn farts, he would like to make his state even more broke, for the unborned babies. Earlier this month, Brownback signed into law SB 95, a bill written by the "pro-life" National Right to Life Committee to ban essentially all second-term abortions by inventing the term "dismemberment abortion" and then saying "that's mean and gross, you can't do that." And because this is a blatantly unconstitutional law, it's going to cost Kansas a truckload of dollars it does not have. Fiscal conservatism, for the win:

[State] attorney general Derek Schmidt told lawmakers there that defending the radical law against the almost certain legal challenges to come could cost the state as much as $450,000, according to the Associated Press.

The attorney general’s office is requesting up to $50,000 by the end of June, as the anti-choice law will go into effect July 1. Schmidt said another $100,000 to $200,000 for the rest of the fiscal year, and up to $200,000 more for the following fiscal year, could be required to defend the medically unnecessary law.

Nearly half a million bucks to fight in court about whether it's OK to ban abortion when we already know that it is not? What a wise use of taxpayer funds. But how in the world will Kansas come up with the money, when it's already in deep financial trouble? Hmm, maybe the state can save some pennies by prohibiting people on welfare from spending their money on Caribbean cruises and fancy panties? Nope, already did that. Perhaps raising taxes to disproportionately hurt the poors, to offset those unaffordable tax cuts for the rich? Aw nuts, already got that one in the hopper. Perhaps it could auction off some more state-seized sexytime toys? Gonna need to sell a whole lot of dildos to fill that growing budget hole.

But don't worry, Kansas, your dickhead governor is going to figure out how to balance your budget immediately. Or as soon as he finishes his victory tour:

On Tuesday, the governor traveled to four different cities across Kansas to reenact the signing of SB 95 in public ceremonies that teenagers could attend. The events took place at a Catholic church education building and three Catholic high schools.

That sounds like a fun field trip for the governor to take, traveling around to visit the state's Catholic teens and be all "This is how I full-on signed that bill, like this" over and over again. Definitely not a waste of time and money. Also, not a downright dickish thing to do. Ha, just kidding, it is super dickish because that's Gov. Brownback for you. As abortion provider Julie Burkhart said, "Reenacting this bill signing in front of children is not only a publicity stunt, but also spreads hate and disrespect." And Burkhart ought to know because she used to work with Dr. George Tiller, before he was assassinated in his church -- right there in Kansas -- by a "pro-lifer." Burkhart is an expert on abortion and also on how Kansas is pretty much ground zero for violence against abortion providers because of its culture of hate and disrespect toward women and their doctors, thanks to "pro-lifers" like Gov. Brownback. So yeah, bragging all over the state about how he heroically saved all those babies from "dismemberment" doesn't help. At all.

But maybe once he's done visiting the schools he isn't shutting down because of how he blew the state's budget, he'll get to work and stop trying to make life hell for everyone who doesn't have a super-rich penis. And hey, there goes another unicorn right now!