Chuck Norris' 'Pastor' Writes All of His Plagiarized Columns 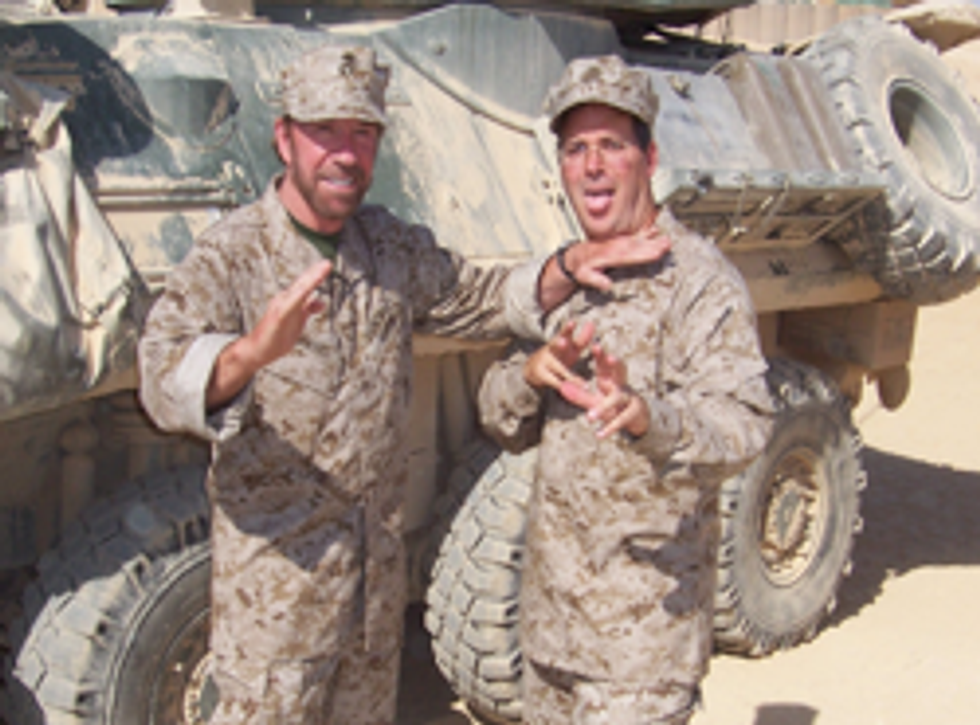 Since your Wonkettecracked the case on Chuck Norris' hilariously poorly veiled plagiarism in his columns, the professional kicker's people have refused to talk to us, and his syndicate, which still feautures Norris on its website, has refused multiple requests for comment. Yes, the man whose entire public persona is based on kicking people's faces off is afraid of some dumb political joke blog. Creators Syndicate has since edited Norris' most recent column to at least credit the news sources from which whole sentences were lifted, but they have yet to take action on the new instances of plagiarism we found yesterday; those articles remain unchanged on Creators' website. Also, this should probably come as no surprise, but Norris doesn't even write these columns, from what we've found. They appear to be penned by a man who works for him, Todd DuBord, who is known as "Chuck Norris' pastor."

An anonymous tipster originally pointed us to DuBord yesterday, and it makes sense, because the man is listed as a "co-author" on Norris' recent books, and because if Norris tried to type himself, the keyboard would explode from the sheer force.

What does this "pastor" do for a living? Here's his website:

Over the past five years, Chaplain Todd has gained national recognition in his work to restore Christian revisionism and reductionism from American historic sites and landmarks. He has successfully led restorations of our Christian heritage at the Jamestown Settlement (first English colony in America) and the Washington Monument (discoveries that were broadcasted LIVE on FOX News and other news agencies across the country

Aha! Remember this Chuck column, in which "Norris" presents a first-person account by "my pastor and the chaplain of my organizations Todd DuBord"? That makes sense now! Chuck Norris doesn't hate national parks. His "pastor" does, and he wanted to tell the readers of the Norris column what happened to him at the Liberty Bell. If you look back at that column now, these lines are pretty hilarious:

Recently, my pastor and the chaplain of my organizations, Todd DuBord, was on a tour of Independence Hall

last week my chaplain received an unfortunate response letter about their grievous tour from Mrs. Cynthia MacLeod, the superintendent of the Independence National Historical Park

(You can read Superintendent MacLeod's letter in entirety at my chaplain's websiteNationalTreasures.org.)

Though DuBord makes it sound on his website like he still serves as an actual pastor, at the Lake Almanor Community Church, we called the church, and they confirmed he left a few years ago to go into business with Chuck Norris. These days DuBord likes to dress up in an army-man costume and go to Iraq with the actor so they can pretend to be real troops.

And for more evidence that DuBord writes these things, we used an e-mail form on Creators Syndicate's Norris page under the link "Write the author." Immediately after sending a message, we received this out-of-office auto-reply from Todd DuBord's personal e-mail account:

Greetings! I'll be on a multi-month special work project and offline for days at a time, so will be VERY slow at responding to email. I appreciate your patience and understanding.

It sounds like it's very hard work plagiarizing a weekly conservative column under the assumed name of a B-movie action star! Certainly Jesus understands why his dutiful pastor has to plagiarize all the time. Men of the cloth got to make bank! Lying, stealing, and pretending you're somebody else is a very godly way to make your living.

Apparently Norris has always used a ghostwriter. A man identifying himself as a friend of the deceased writer Joe Hymans, who is also listed as a co-author of past Norris books, wrote to us to say his late pal used to do all of Norris' writing.

So, yes, apparently Chuck Norris is not capable of writing anything, even plagiarized columns.