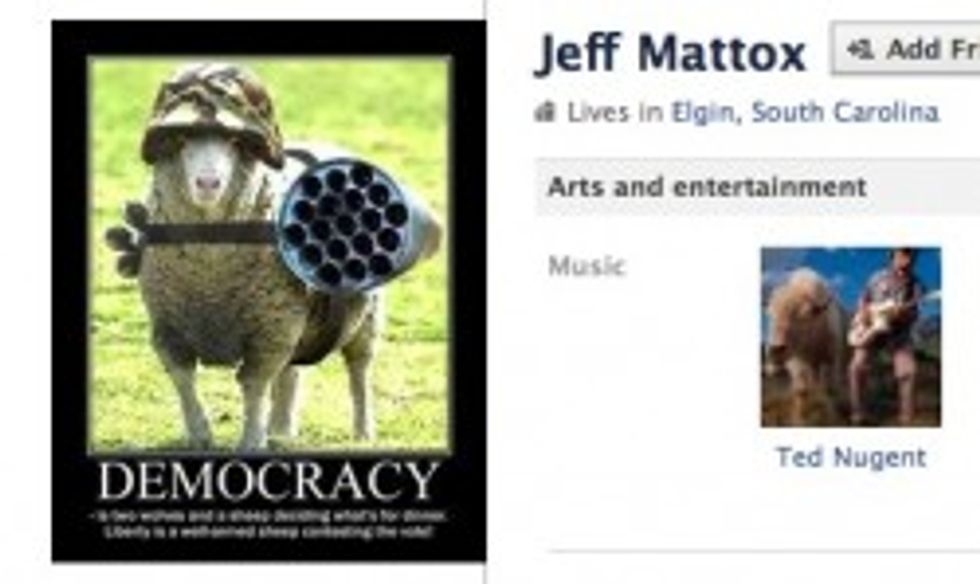 Murderous right-wing nutjob rage seems to be all the fashion these days! South Carolina Republican Kershaw County co-chair Jeff Mattoxthought fit to go ahead and click the Facebook "Like" button on a link to a bizarre, lengthy ALL CAPS-laden screed asking, "when is somebody justified in shooting a police officer?" Hint: if you answered "never, you are completely insane," you are just one of the soapy-brained sheeple wandering around life oppressed by History and Tyranny and Rules. This sophomoric rant was posted to the Kershaw County Patriots Facebook page, a (wait for it) Tea Party group specializing in maniacal anti-government paranoia where Mattox is also a member.

A South Carolina Republican county co-chair is embroiled in a controversy over "liking" a Facebook article that advocated shooting law enforcement officers.

Jeff Mattox, who is also a tea party activist with the Kershaw County Patriots, gave digital plaudits to an article entitled "When Should You Shoot A Cop" posted on the Patriot's Facebook page.

The post that Mattox "liked" also included award-winning arguments such as, "If politicians think that they have the right to impose any 'law' they want, and cops have the attitude that, as long as it’s called 'law,' they will enforce it, what is there to prevent complete tyranny?" Answer: democracy. SOLVED. GO HOME, NUTTERS. [Politico]