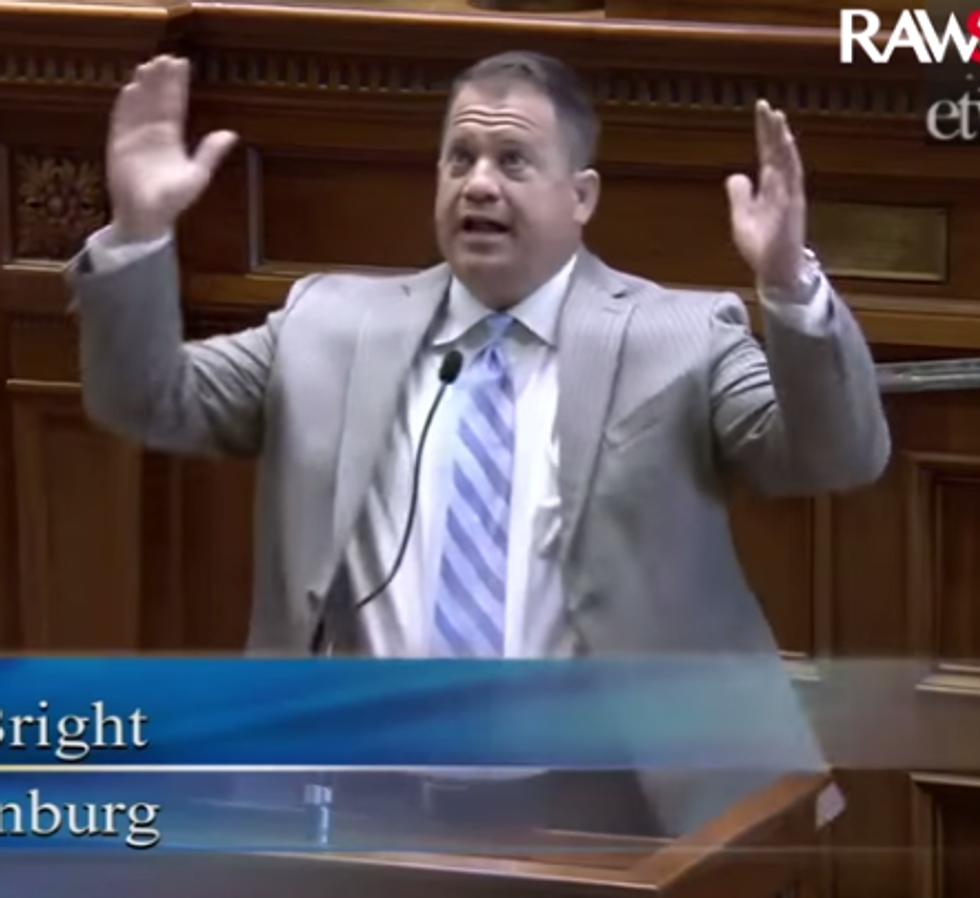 The South Carolina Senate voted Tuesday to remove the Confederate Flag from the state Capitol grounds, sending the bill to the state House, and hopefully, eventually, to Gov. Nikki Haley's desk. This is very bothersome for state Sen. Lee Bright (R-No Shit), who just doesn't see why we're spending all this time talking about the Confederate Flag, not when the FLAG OF GAY HOMOSEXUAL ABOMINATION is currently flying over the ENTIRETY OF AMERICA. Bright, who is Ted Cruz's campaign co-chair for South Carolina (obviously), melted all the way down into a pile of shouty Southern fire and brimstone wingnut tears as he explained on the state Senate floor just how much God hates America now:

"I heard our president sing a religious hymn, and then Friday night, I watched the White House be lit up in the Abomination Colors!"

Obama was singing "Amazing Grace" at the Charleston funerals, and The Abomination Colors is a great name for a band.

"It's time ... for the church to rise up, it's time for the state of South Carolina to rise up. Romans Chapter 1 is clear, the Bible is clear, this nation was founded on Judeo-Christian principles, and they are under assault by men in black roaches ... robes, who were not elected by you. We better make a stand. What I'd like to see is these folks that are working ... in the positions that are dealing with these marriage certificates, not to have to betray their faith or compromise their faith, in order to subject themselves to the tyranny of five judges!"

Now look, three of the judges who crammed gay marriage into poor Sen. Bright's throat were not "men in black robes," they were LADIES in black robes. That's right, dude. You got throatcrammed by GIRLS, and also by two boy judges.

This is where the pussy blubber-sobbing starts. For your helpful reference, it's about 1:40 into the video. So yes, gay marriage is worse than 'bortion, we're One Nation Down Under or One Nation Going Down On Each Other or something, go on:

"And to sanctify deviant behavior from five judges, it's time to make our stand, church!"

We must note that on the word "want," Bright's sobbing causes his voice to break, and he sounds just like Kenneth on "30 Rock" when he gets upset and his "accent come out."

The rest of Bright's comments are the usual boilerplate bullshit about loving the sin and hating the sinner, and then some whining about religious freedom.

Seeing the wingnuts who are actually crying about this almost makes us feel sorry for them, for a split second. This is what American Family Association spokeslady Sandy Rios was all sobbing and crying about, how gays just don't understand! Gay marriage has awakened Big Mean Loving God from his slumber, and she is very afright as to what He will do next, because her God is so loving, yet so petty and sensitive! Nobody understands that God is so mad He's gonna come down to Earth any old day now and get to smitin', or maybe He's just going to send hungry Muslims to attack us, and you better be prepared when that day comes. Don't say you weren't warned!

Nah, just kidding, we don't feel sorry for them. Their brains are broken, but that ain't our fault.