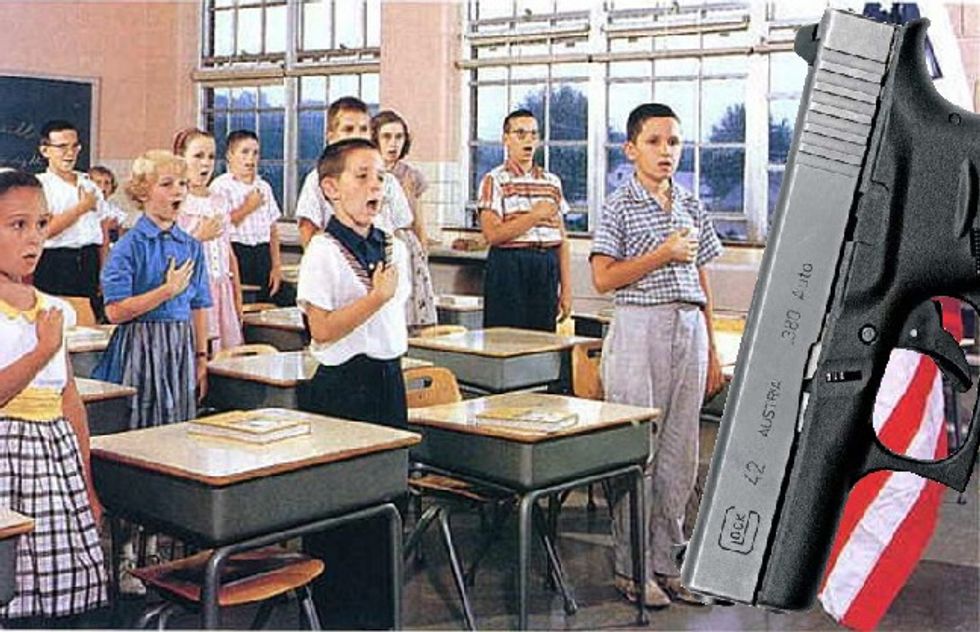 Forget the kerfuffle over the revised Advanced Placement U.S. History standards, or funding for education, or Common Core or any of that. Legislators in the Great State of South Carolina want to bring some Education Reform that will really improve the schools: Two bills have been introduced that will promote appreciation of the Second Amendment, the only part of the Constitution that really matters. One bill would allow schools to offer either marksmanship or gun safety classes as electives, and another would:

create a Second Amendment Awareness Day to be held on Dec. 15 each year in all state schools, complete with a poster or essay contest centered on the theme "The Right To Bear Arms: One American Right Protecting All Others."

You see, the problem is that while South Carolina already requires children to learn about the Constitution and the Bill of Rights, some Republicans fear the schools simply aren't friendly enough to guns and the Second Amendment, which, along with the Bible, is the basis for the rest of our system of government. And it wouldn't just be the one day, although that of course would be the pinnacle of the program, a kind of Second Amendment Saturnalia. Beyond the essay contest and the High-Caliber Holy Day, the law would also require that all students at every grade level would:

receive at least three weeks of education on their gun rights based on a curriculum chosen by the state Department of Education and approved or recommended by the National Rifle Association.

One of the bill's sponsors frets that in a misguided attempt to keep kids "safe" from "weapons," the schools have seriously eroded the cause of freedom in South Carolina:

By avoiding second amendment speech in schools, he said, “We are giving short shrift to the one amendment that protects all others.”

Already, wimps who don't appreciate freedom are whining because the date Clemmons chose, December 15, happens to be one day after the anniversary of the Sandy Hook Massacre (if it happened at all). Clemmons says he's fine with changing it, and that he didn't mean any disrespect. He just thought it was a good midpoint in the school year to celebrate Second Amendment Christmas.

[contextly_sidebar id="jRMsocZUUZAQ1w6f2vSVWVe3cMPgcu5Y"]We'd suggest February 23, which you may recall was the date chosen a few years back to celebrate guns everywhere and "resist" efforts to restrict them, a couple months after Sandy Hook: "2/23" would commemorate .223 caliber ammunition, the standard round used in most AR-15 semiautomatic rifles. What better way to remember the sacrifice of all the heroic bullets that were unjustly blamed for the deaths of children at Sandy Hook? They only flew where they were pointed, after all. As the organizers of that great National Walk Around With a Gun Day said, it was a pretty "clever" date. We hope Clemmons will give that some thought.

Clemmons says that he knew it was time to fight back against the pernicious influence of "zero tolerance" policies when a high school student was persecuted for mentioning guns in an essay:

His idea for the bill came after an incident in a Summerville high school in September where police were notified and a 16-year-old student’s locker searched after he wrote a fictional essay that mentioned purchasing a gun to kill his neighbor’s pet dinosaur.

The student was arrested and charged with disorderly conduct after police said he became belligerent.

Clemmons said the incident “shocked” and “offended” him.

“In this case, it squelched a student’s first amendment rights, in responding to an assignment, to talk about the second amendment,” he said.

We agree that searching a student's locker because he mentions hunting a dinosaur is pretty stupid, but would also point out that neither the First nor Second Amendments include a right to disorderly conduct. Hold on -- was this student white? If so, he can talk about guns all he wants. If not, he's lucky he's not dead.

The other bill, to allow shooting classes as an elective, was introduced by state Sen. Lee Bright, and would not involve setting up shooting ranges on campus; instead, students would be bused to a local gun range and given firearms instruction. On-campus classes would focus on safety and gun rights. Bright offered the bill after he failed in the last legislative session to pass a bill allowing open carry of firearms. Obviously, if people opposed that, then the schools need to teach the people of South Carolina that the Gun Is Good.

Isn't it nice to see state legislators doing something to actually improve schools instead of just complaining that they're factories for liberal indoctrination?

Mr. Bright, you may recall, is the Teabagging gent who unsuccessfully ran against Sen. Lindsey Graham, sending out an innuendo-ey campaign email that played on rumors that Graham is -- shhhh -- totally gay. He lost, big time, so perhaps he should see if the schools need to teach kids to recognize a homophobic slur when they're supposed to.