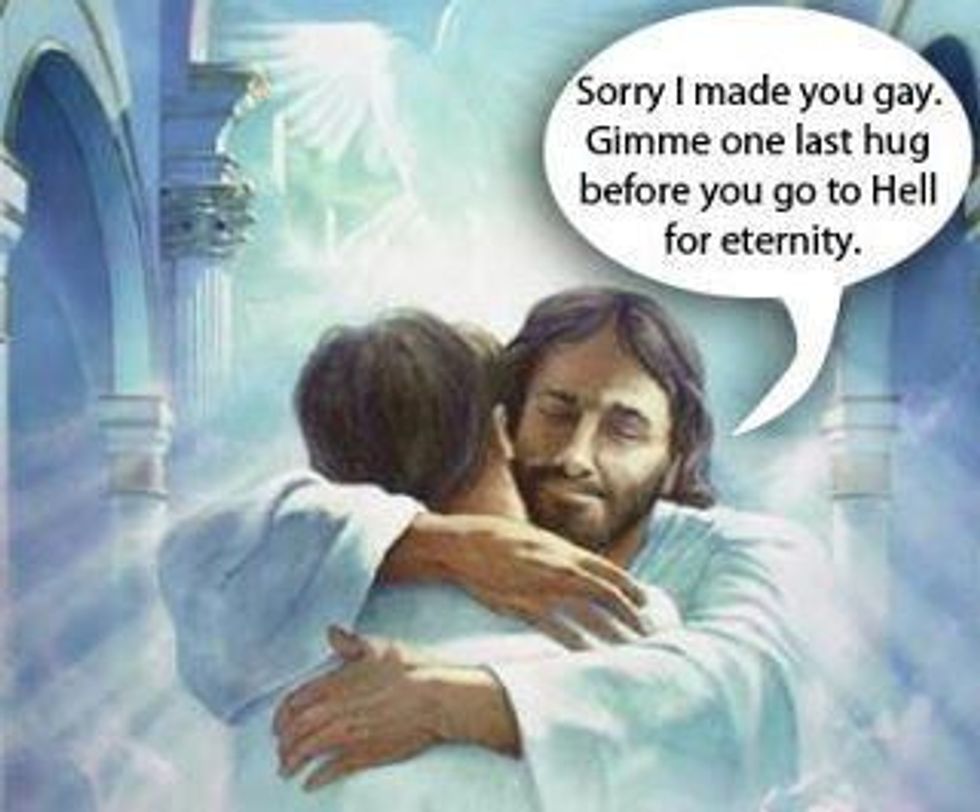 Probably how it happens.

[contextly_sidebar id="7hEkSHdV6r5X4LcwibW1Upj0AkVk8m4C"]In 2015, The Supreme Court forced all Americans to do gay to each other's butts within the bonds of holy homosexual matrimony, and the transgenders started invading all the Good Christian Potties and peeping on the ladies applying their Maybelline while they drop dainty deuces. Meanwhile, some of our states have been having a big exciting competition to see who can beat up the gays and the BLTs the most. Indiana did its "religious freedom" dance (and it's still doing it!), Louisiana did the same dance but in a Cajun style, and the Texans of Houston voted to make sure LGBT people don't accidentally get under the impression that they're human beings. And that's just the tip of the gay-hatin' iceberg!

Now South Dakota, home of the (???) and that big mountain with the president heads on it, would like to take a turn. South Dakota HB 1107, tell us about yourself:

Disguised as an attempt to protect religious beliefs, HB 1107 would authorize any “individual, corporation, company, sole proprietorship, partnership, society, club, organization, or association” to wield religion as a sword of discrimination against same-sex couples, transgender people, and single mothers without losing taxpayer funding, contracts, licensing, employment, or other forms of state recognition.  Taxpayer-funded adoption agencies could refuse to act in the best interest of children if it means placing them in the loving and committed homes of LGBT couples. Single mothers could be denied help from taxpayer-funded charities. Therapists who have lost their licences because they practice abusive “conversion therapy” on transgender kids or who shame the child of gay parents would still be recognized as licensed by the state.

Cool, it's the old "If Jesus says I don't have to follow the rules, then neener neener!" religious freedom bullshit! It passed the South Dakota House by a 46-10 vote.

South Dakota HB 1112, tell us what makes you feel sexxxy:

HB 1112 would directly override the authority of the South Dakota High School Activities Association and states, “a student’s sex is determined by the student’s chromosomes and the sex recorded on the student’s official birth certificate.” It explicitly voids the existing policy adopted by the Association, which allows transgender students to participate in athletic activities consistent with their gender identity.

Cool! Glad somebody's out there making sure there are no stray vaginas on the boys' varsity football team! It passed the state House by a 45-23 vote.

The Human Rights Campaign reports there's ANOTHER bill, name of HB 1209, which has NOT passed (yet), and would make sure any "public body" of the state ONLY accepts a person's original long form birth certificate when determining whether they are ladies or man-ladies. "If the gigglybits don't match, that ain't no snatch!" is a good motto they could use, if they were soliciting advice.

Last month, the South Dakota House ALSO passed HB 1008, which makes sure when transgender kids are doing the whizzing at school, they are doing it one stall over from kids whose noo-noos look JUST LIKE THEIRS.

So they've passed three bills in the House, and one to go! Anything else? Well surely, you'd love to hear from an unreconstructed moose-diddling maggot Republican, state Sen. David Omdahl of Sioux Falls, who has his first boner in years, he's so excited to vote for these fuck-the-gays bills:

I'm sorry if you're so twisted you don't know who you are. A lot of people are. ... I don't even understand where our society is these days. You know, I look at what's going on in the military, et ceterry, they're treatin' the wrong part of the anatomy. They oughta be treatin' it up here!

So, South Dakota, these are some really great bills, and you're doing the gay-bashing work Jesus surely would have gotten around to, had He not gotten distracted teaching "God Is Love" and other liberal faggot stuff like that.

Just fooling, fuck you people in the ass with whatever the pointiest nose on Mt. Rushmore is.