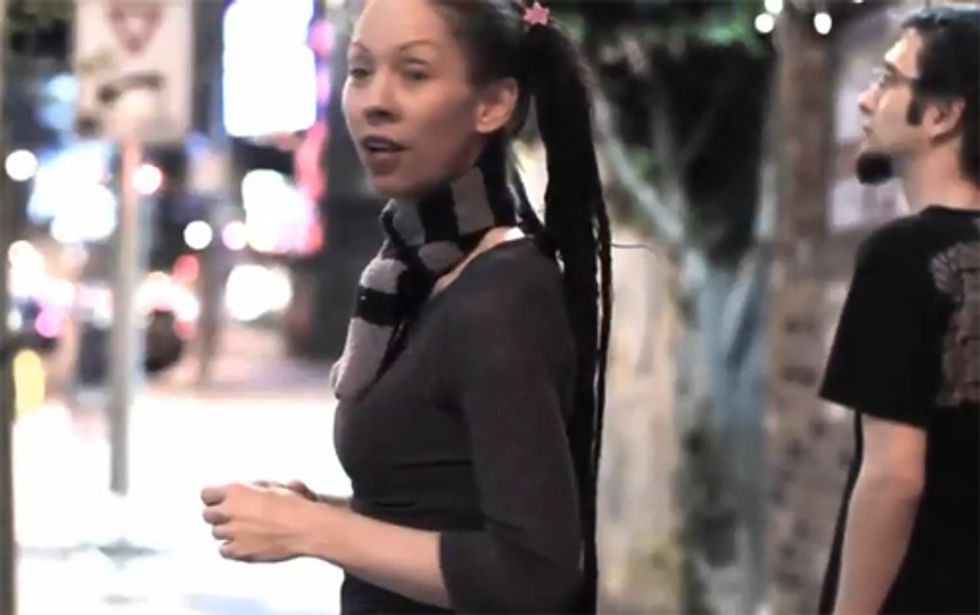 Here's how dedicated Dustin Rosondich and Xylie Eshleman are to theirSovereign Citizen beliefs: They reject the label "sovereign citizen," because if you're a "citizen, then that means the government owns you, man:

“What we are, is we’re Americans,” Eshleman said. “What we did, is we did Expatriation Act of 1868 … What we did is we took our citizenship and we got rid of it. We’re expatriated from the United States.”

That's all well and good, but it doesn't make their handwritten license plate -- which says “Non Resident 6-55-502. Privilege tax on nonresidents prohibited. Lienholder (my chattel)” -- a whit more valid. Even if other loons insist it is so. Also, E Pluribus Boola Boola Alley-ga-roo.

The couple -- from California, where your wingnut looniness is sometimes infused with some New Age crystals and sage smoke -- had come to Tennessee to build them a "cob earth house" and live free, and do not recognize the authority of the state to ticket them for not having a license plate, because of the 14th Amendment, as any fool knows. And so they didn't sign the traffic citation, which is why they have been in jail since May. It's all about their natural God-given rights, of course:

“There are citizens of the U-dot-S-dot that hold constitutional rights under the 14th Amendment of the Constitution of the United States,” he said. “This country was based on sovereignty, and today if you say the word ‘sovereign,’ you’re looked at as a terrorist or something. It’s funny. It’s actually a dichotomy.”

Actually, it isn't even a dichotomy. A paradox, maybe, from your weird perspective, but definitely not a dichotomy. Your sovereignty does not extend to the lexicon, mac.

Almost everything that Eshleman and Rosondich say is pretty darn derpnacious, which is a perfectly cromulent word. For instance, they insist that they're not dangerous radicals or anything, because they follow only common law, aka God's law:

“I’m even a vegetarian,” Rosondich said. “I wouldn’t even kill an animal to eat. I don’t have any criminal record … I choose love. I choose life, liberty, the pursuit of happiness under God.”

Rosondich claims he’s spoken to the Tennessee secretary of state, who he said assured him of the right to claim his natural rights as a human being under common law.

Eshleman, who said she had hoped to become a lawyer and studied case law for years, said there were “two laws of the land.”

“The legislature calls one superior and one inferior,” she said. “The laws that these police officers are trying to uphold are laws that were coming after 1868 with the United States. If you think about it, the Constitution is upholding common law, and if you understand law, the laws in the Constitution are absolutely common law. Common law is God’s law. We were on a religious pilgrimage to uphold in our own life, to uphold common law.”

And by golly, you don't need a license plate for your vehicle, because come on, God doesn't want people to be oppressed, according to Eshleman:

“A right cannot be turned into a privilege by the state,” she said. “Then all of the sudden you have a privilege tax. A privilege tax is license to drive, registration and a title for the car. Those are privileges. Why are those privileges? Because they’re commerce … it’s our right to travel. It’s our absolute right.”

And hey, if other people are stupid enough to pay taxes and fees that pay for those roads, that's their problem. In any case, once their legal difficulties are ended -- possibly when the state of Tennessee gets tired of housing them? -- the wandering minstrels plan to go back to Costa Rica, where they used to live, and never got hassled by the Man, says Rosondich:

“They don’t treat people like this ... It’s beautiful. The food grows on the trees, and it’s peaceful. The police officers are there to help.”

We bet you wonder what their music sounds like, don't you? It's is SO GOOD, you guys (it kind of sucks):

Follow Doktor Zoom on Twitter. His unique interpretation of the Constitution rests on a contention that the 3rd Amendment is the foundation of all Liberty.