Spirit Airlines Will 69 You In The Sky, Wingnut Outrage To Commence Shortly 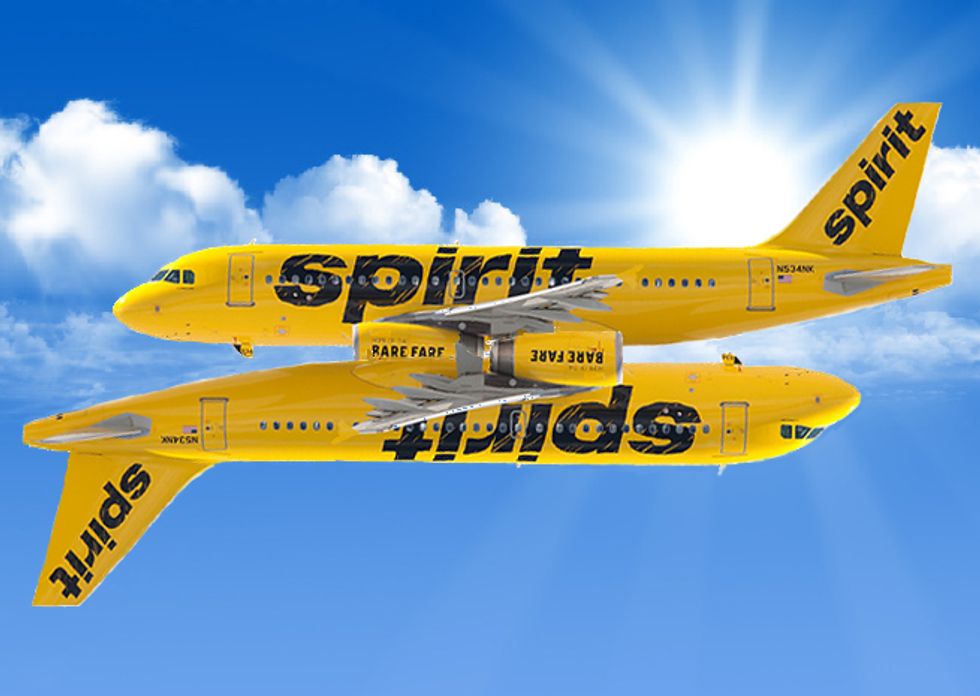 The budget carrier Spirit Airlines is having a celebration, and they want YOU to come 69 the friendly skies with them, doesn't that sound like a hot thing you want to cross of your bucket list? They are doing this because they have recently added a sixty-ninth airplane to their fleet, and if their website is any indication, the folks at Spirit have been boning up for this new addition to their family for quite a while now:

We've been waiting to hit 69 planes for years. It's our favorite number - ever since we were twelve and found that magazine under our brother's bed (the one with the fantastic articles). #69 is perfect: just the right size, with a cockpit that's in your face (because it's bright yellow). Use your mouth to spread the word: Spirit is in an even better position to get you where you're going. We're popping an epic Bare Fare in celebration! $69.00* round trip!

That is a good sexy deal, for an airplane flight, especially on a plane that has its cock(pit) right in your face, no matter which direction you might be facing! We would use our mouths to talk about this, if they weren't so full of savings! It does say that "additional baggage charges apply," but that makes sense, it costs extra money if you want somebody to Lift Your Luggage.

Spirit has a history of using funny sex campaigns to stick their fingers in the virgin eyesockets of Traditional Americans. For instance, the time that they offered Many Unbelievably Fantastic Fares on trips to great diving locations (that would be Muff Diving, if you didn't get it):

Sometimes they do political funny, like the time Anthony Weiner couldn't stop sexting Sydney Leathers, and Spirit responded by e-mailing people to see if they would like to see the AIRLINE'S "weiner," with fares starting at $9 each way, which seems pretty expensive for Anthony Weiner's weiner.

Also, sometimes, they are kinda fucking rude, like when they did the "Eye Of The Tiger" campaign, after Tiger Woods was in a car accident, which featured a tiger slamming his SUV into a fire hydrant. Or the time when they used the "free at last!" slogan to celebrate air travel on Martin Luther King, Jr.'s birthday, that's NOT racially transcendent!

Clearly, Spirit Airlines' ad guys are thirteen years old, and as pubescent boys' jokes often are, they are very hit or miss, a concept that MAY not be good to put in the mind of somebody looking to spend money to have a person fly them through the sky at high speeds, especially considering the fact that Spirit, while heavy on the 69-ing and muff-diving jokes, seems to be very, very light on the customer service and generally has a reputation for being one of the worst fucking airlines ever?

Regardless, we are breathless with anticipation for inevitable wingnut meltdown from American Family Association subsidiary, "One Million Moms." If you don't already know, OMM is pretty much one halfwit Never-Nude lady named Monica Cole, who spends too much time on the computer, ranting about pig-fucking in GEICO ads, the fact that fagzbians are allowed to eat graham crackers, and the demonic outrage of sexy boxer-clad menz shakin' the crotch bells what God gave 'em, in KMart Christmas ads. Monica, stop dead-eyeing the camera and launch a boycott!

According to Spirit's website, the current deals end March 17, so if you need to go somewhere, there's a firm deadline on this "69," and it's coming, it's coming, quickly, coming! Get yours while it lasts.