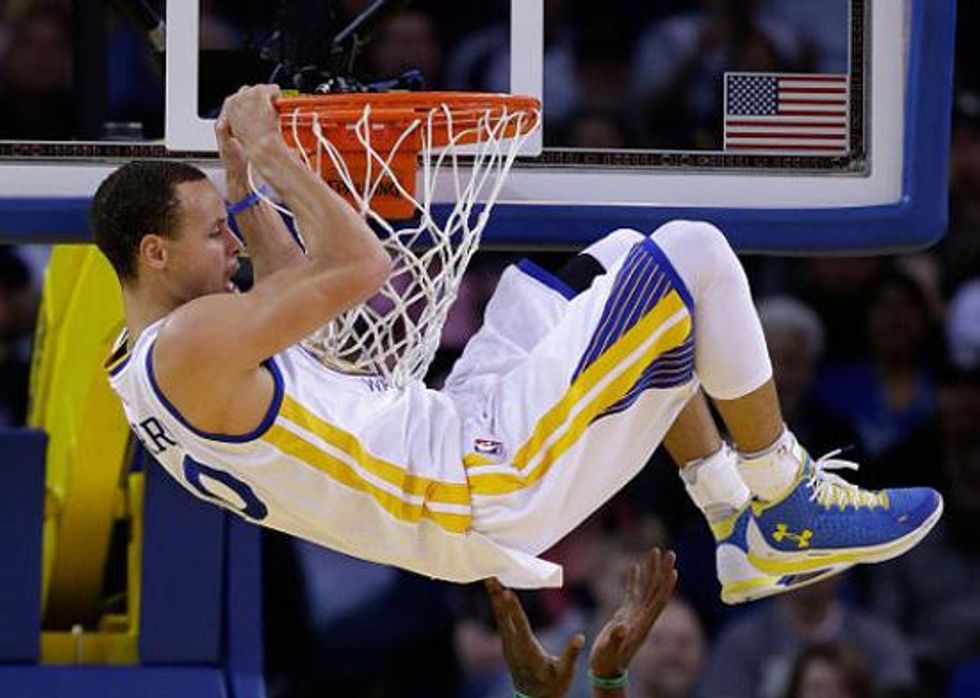 Yr Wonkette will confess that we aren't the greatest follower of professional Basket-the-ball, but we do know an excellent score in a game of the Dozens, which is precisely what was delivered by NBA star Stephen "Steph" Curry Wednesday in yet another instance of a sportsball person having a political opinion. Here is the play-by-play: On Tuesday, the CEO of athletic wear company Under Armour, Kevin Plank, raised some eyebrows among basket-the-ballers when he described President Trump as "an asset," without even adding that we have no way of determining that asset's value since Trump hasn't said what he feels it is today. Then, on Wednesday, Mr. Curry, who is one of Under Armour's highest-paid "brand ambassadoers," offered his take on his sponsor's comments in an interview with the San Jose Mercury-News:

“I agree with that description,” Curry said, “if you remove the ‘et.’”

We miss you already, Barry.

Nicely wordplayed, Mr. Curry. A less adept punmonger might have ruined the whole thing by over-explaining it. Instead, you trusted us to finish the thought, giving us only the slightest lexical nudge, a perfect assist to the punchline. Bravo. Steph Curry may be a dad, but his Dad Joke was pretty swift -- a decided contrast to those inflicted on us by complete dad Barack Obama every year during theThanksgiving turkey pardon. Obama would joyfully go Full Dad, drawing out the agony:

Malia and Sasha, by the way, are thankful that this is my final presidential turkey pardon. What I haven’t told them yet is that we are going to do this every year from now on. (Laughter.) No cameras. Just us. Every year. No way I’m cutting this habit cold turkey. (Laughter and applause.)

Good one. That was pretty funny.

Steph Curry would never follow up his "if you remove the ‘et’” with "That was pretty funny." It's excessive, as all true Dad Jokes must be. This is not to say that Steph Curry's Dad Joke is inherently superior to Barack Obama's Dad Jokes -- it's a difference of style, is all. Obama revels in the very awfulness of his pun, knowing that his daughters are screaming on the inside. Steph Curry drives the lane, shoots, and scores, and leaves you blinking in admiration.

And President Bunglecunt? Basketball-hued though he may be, we doubt the occupant of the Oval Office is comfortable enough in his own thin skin to pull off a proper Dad Joke, which requires a certain humility and self-awareness and not having the "joke" be that you would like to make love to your daughter. It is not a good Dad Joke, even at all.

In conclusion, Steph Curry is the Steph Curry of Dad Jokes, Barack Obama is the Ur-Dad, and Donald Trump is a bad father and a bad joke.