St. Louis Cops So Excited To Use Their Riot Toys (And Wonkette Is There!) 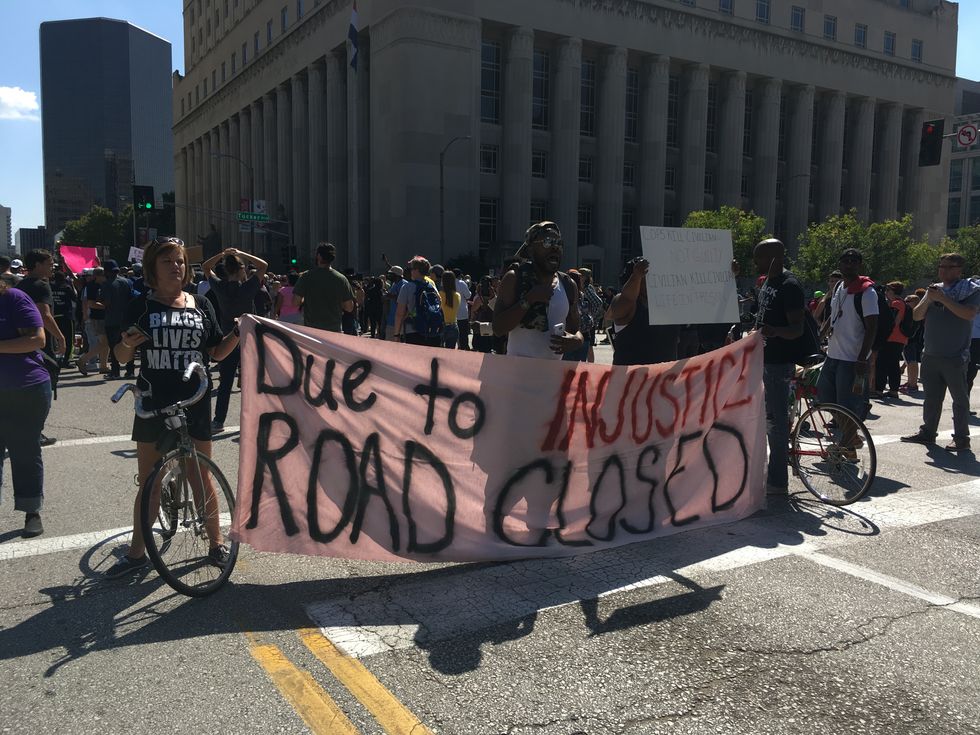 The not-guilty verdict in the Jason Stockley trial is just the latest example of what "justice" looks like in the MAGA era. Stockley is a police officer who said he was going to shoot a guy, then shot the guy on camera at close range, and then processed the crime scene himself without gloves. That is, of course, how the gun he said his victim had came to have his fingerprints on it. His victim, Anthony Lamar Smith? Well, his prints were not on the gun. That's only the beginning of the shenanigans, of course, but this bit of writing isn't about Jason Stockley, exactly. It's about the police in the place he worked.

Stockley's trial finished and went to the judge on August 9. That was about when I asked Wonkette's very own Dom to come join me in St. Louis for the verdict, because he takes very good pictures and is a real reporter and whatnot! So for a couple weeks, Dom and I guessed about whether it was time to go to St. Louis and roughly two weeks ago we made it there.

In Ferguson, days before the verdict. Credit to Dominic Gwinn.

That was a dumb decision on our part! Thinking a verdict would be timely, and arriving in accordance with that reasonable expectation! That doesn't happen in St. Louis!

Thus, we participated in two weeks of trying to figure out whether the verdict was likely to happen soon. We weren't insane to think the verdict might be any day. The signs were there -- first, the city put up barricades around downtown buildings, then they started giving interviews about their preparations for the verdict and how everyone needed to stay calm and not destroy property.

No, really, this is what St. Louis was doing during the protest. See the far right side.

Given that it's very unlikely that they'd worry about a popular uprising from local white people over a guilty verdict, everyone assumed the verdict had been given and was merely being held until its release was most advantageous.

Flash forward to September 15! Protests began downtown with maybe 20 people. By noon it was hundreds. At one point it must have been thousands. They put in ten miles by 4PM, walking all over the downtown.

about half an hour after the verdict

By about 4pm, the police had maced someone who used a public bathroom, knocked down and nearly trampled an old lady for no real reason then arrested her for interference, brought out their surplus military vehicles, and upgraded from the bike cops of the morning to the fully-armored creepy-robot gear that includes really big clubs.

When evening fell, protesters marched to St. Louis mayor Lyda Krewson's house. It was in a gated community, and I have to wonder whether the people looking out their windows thought the pitchforks had finally come. That was loud but basically fine until two people started throwing rocks at the windows. After that, the evening was basically tear gas, wasted government money and police disrupting a synagogue on Shabbat.

No, really, they trapped protesters inside, brought in a few APCs and probably two hundred riot cops. It was a super-useful use of public funds!

This is a different line of police than that first picture, and that mist behind them is tear gas! In a fancy neighborhood!

Fun fact about St. Louis cops: when they form up like that and advance, they try to hit their sticks on their armor or the street with every slow step. I have seen them attempt this more than a dozen times, and it's always like when you have an audience that's bad at clapping together.

When you think about this place, that's the context you need. It's not a question of both-sidesism, it's a question of whether one side is employed specifically to serve and protect another, and whether they're doing so. I was in at least two places that tear gas really was gratuitous, and meant to harm residents who hadn't actually committed any crime other than insisting they were allowed to stand on their front porches, which in the pantheon of crimes seems not bad enough to warrant chemical munitions.

Thanks for paying our salaries, Wonketeers! Click here to donate!