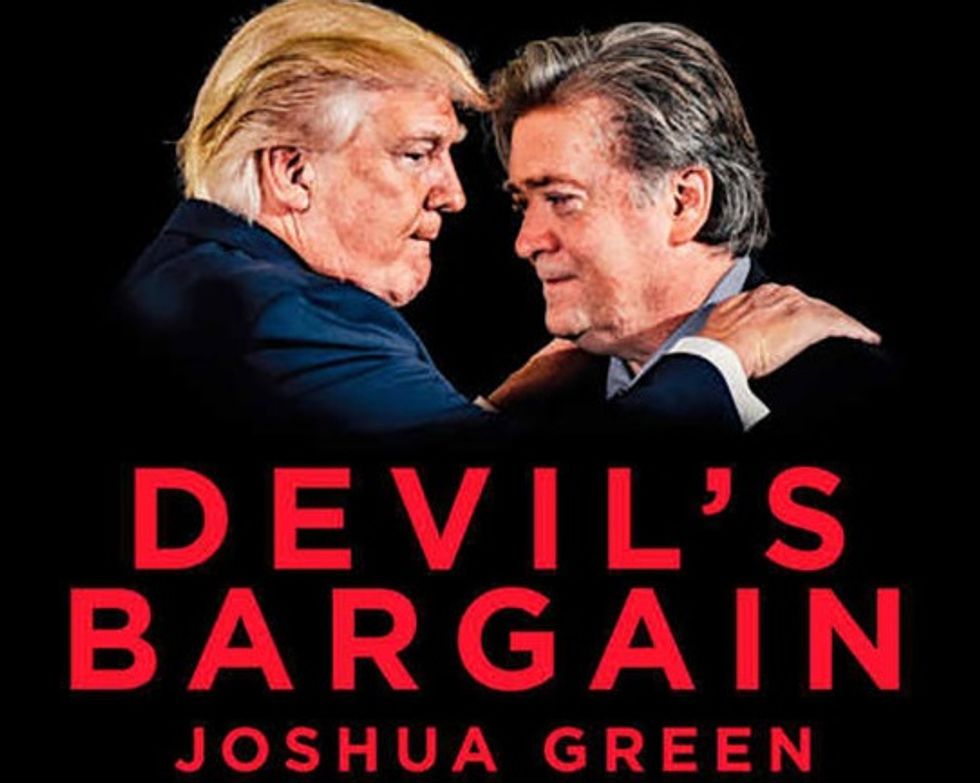 It's assholes all the way down

Yr Wonkette is not necessarily a believer in the old-fashioned notion that a book review has to be written right at the moment a book comes out, or even while it's still on the best-seller lists. Or, in this case, even while its chief subject, Steve Bannon, was still working in the White House. (Bye, malevolent shit monster! Bye!) No, we believe in reviewing books when we damn well get around to it, which is why we're reviewing Joshua Green's excellent Devil’s Bargain: Steve Bannon, Donald Trump, and the Storming of the Presidency, in November, instead of when it came out in July. Also, we're sometimes a really slow reader, especially when some idiot in the White House kept making news all the time. We finished reading the book sometime in August, but there never seemed to be time to write up our review (also we are lazy).

Robert Mercer distances himself from the rightwing noise machine he helped create. At least as distant as his daughter Rebekah.

Also too, a significant chunk of Green's book is suddenly in the news again, since last week, Steve Bannon lost his former patron, rightwing billionaire Robert Mercer, who was happy to fund Bannon and Breitbart.com while they were on the rise and getting Donald Trump elected, but were kicked halfway to the curb once the association with Bannon started damaging the reputation of the hedge fund Mercer had built into a money machine.

Robert Mercer, his middle daughter Rebekah, and their oodles of money are important supporting characters in Devil's Bargain, especially the money. Bannon was fond of calling Mercer "the Godfather," and not because he loved the way he'd put an orange rind in his mouth and chase a giggling Bannon around his garden. Green reminds us that Mercer has been a longtime backer of crank pseudo-scientist Arthur Robinson, a nut in southern Oregon who

was consumed with extending the human life span and believed that the secret to staving off death and disease could be found in human urine. To that end, Robinson collected thousands upon thousands of urine samples, which he froze in vials and stored in massive refrigerators that stood among his wandering sheep.

Mercer not only found Robinson's ideas intriguing and subscribed to his newsletter (which is where Mercer probably picked up his belief that small amounts of radiation exposure make you healthier, so a nuclear war wouldn't necessarily be a bad thing), he also backed Robinson's failed 2010 congressional campaign. The Mercers have given Robinson a metric buttload of money to buy more urine-storage freezers and more expensive scientific equipment, too.

Mercer got rich after a career in computer science; he worked at IBM, where his outside-the-box approach to using computer algorithms for language translation revolutionized the field and became the basis for later developments like speech recognition software and Google Translate. He was recruited in 1993 to join the hedge fund Renaissance Technologies, where he helped that company develop computerized trading systems that could spot minor changes in the market and make trades faster than any human analyst could -- and based on data points humans wouldn't think to pay attention to. And that's how Robert Mercer became a billionaire who gives money to urine cranks and to weirdass political outsiders like Bannon (if you're keeping score, that's one more -- albeit tangential -- connection between Donald Trump and someone obsessed with pee).

Mercer's fondness for eccentrics led him, once he got interested in politics, to weirdo outsiders like Andrew Breitbart, and thence to Bannon. Mercer met Breitbart in 2011 at a conference sponsored by the rightwing Club For Growth, and like an evil Yossarian first beholding an evil chaplain, it was love at first sight. Before long, the Mercers had invested $10 million to help finance the rebuild and relaunch of a new and bigger Breitbart.com, although Andrew Breitbart himself dropped dead (the day before Rebecca Schoenkopf bought Wonkette -- NEVER FORGET) before the project came to fruition under Bannon.

The Mercers funded Bannon's little website and brought him in to help with other projects they funded, like the data firm Cambridge Analytica, and the Government Accountability Project, the rightwing think tank that funded loony Peter Scweitzer. Bannon suggested that Schweitzer's next project should focus on all the corruption by Bill and Hillary Clinton, and the result was the dumb book and movie Clinton Cash, which may have been full of bullshit and innuendo, but has become a veritable bible for Hillary-haters. (Robert Mercer himself is, according to one of Green's on-the-record sources, a firm believer in the notion that the Clintons have murdered people, the way they do.) By the time the Mercers switched their allegiance from Ted Cruz to Donald Trump, they were able to bring to Trump's campaign what Brian Fallon, Clinton's comms director, called

a standalone ecosystem in conservative media that very aggressively and successfully promoted certain stories and narratives we had a blind spot for during the campaign.

Unlike a lot of rich people who hire a political consultant to help advance their political aims, says Green, the relationship between Mercers and Bannon was "inverted":

Instead of the help, he became the Svengali. And the Mercers, whether or not they fully appreciated it, became the merchant bankers funding Bannon’s broad-ranging ambitions.

At least until last week, or at least on paper -- while Robert Mercer formally distanced himself from Bannon, he only moved his financial interest in Dead Breitbart's Website For Scaring White People to a slight remove, selling his ownership stake in Breitbart.com to his three daughters.

Now, Devil's Bargain isn't primarily focused on the Mercers, although their money is a huge part of why Bannon and Trump were able to seize control of the Republican party and tell the Establishment to GTFO. There's much, much more to the book, especially on some of the bizarre ways Bannon developed his conspiratorial worldview. Bannon's fondness for apocalyptic thinking meshed nicely with Trump's, and also with Andrew Breitbart's understanding of media and how news can be manipulated to be deployed as an ideological weapon. How's this for an insight?

Breitbart’s genius was that he grasped better than anyone else what the early twentieth-century press barons understood— that most readers don’t approach the news as a clinical exercise in absorbing facts, but experience it viscerally as an ongoing drama, with distinct story lines, heroes, and villains. Breitbart excelled at creating these narratives, an editorial approach that lived on after his death.

We also learn that Bannon is a master of absorbing whatever comes across his path -- like a political Katamari Damacy game -- and using it to advance his aims. Before he started making shrill rightwing movies, Bannon briefly spent some time running a Hong Kong firm that specialized in "gold farming" for online games like World Of Warcraft. The business took scarce in-game resources -- produced by Chinese players paid a pittance to endlessly play the game -- and sold them to Western players who didn't want to grind out all that labor themselves. The business went belly-up after being sued by Blizzard, the owners of World of Warcraft, but Bannon learned that there were a hell of a lot of "intense young men" in the shadows of the internet who might live in their parents' basements, but also had the power to work together to stir shit up:

As he would later confirm, this luciferous insight gave him an early understanding of the size and strength of online communities, along with an appreciation for the powerful currents that run just below the surface of the Internet. He began to wonder if those forces could be harnessed and, if so, how he might exploit them.

Add in Gamergate, Reddit, and 4chan, and you have the makings of Donald Trump's Online Flying Monkey Rage Brigade, ready to be deployed against any journalist who says something the least bit unkind about Melania Trump.

The moment for Devil's Bargain as a news-breaking campaign profile may have passed. But we're actually glad we waited a while to look closely at it again, because while Steve Bannon's face may no longer be haunting the White House and making people remember they need to get vaccinated against any number of horrific diseases, the stench of his influence still hangs over American politics. So now you don't have to buy this book merely because it's a bestseller. You can buy it because it's a damned good read.

Yr Wonkette is supported by reader donations. Please click here to help us pay the bills and keep the lights on, and occasionally buy books.

You can also support us by buying YOUR books through the Amazon linky over in the right sidebar. Or go buy the books we're reading now, and plan to review REAL SOON: Katie Tur's often hilarious campaign memoir, Unbelievable: My Front-Row Seat to the Craziest Campaign in American History, or Ta-Nehisi Coates's brilliant reflection on the Obama years, We Were Eight Years In Power, which is also a writer's memoir of his own growth as a writer and thinker, as well as a one-book workshop on how to write literary nonfiction. It may even be a dessert topping/floor wax.