Steve King Has Terrific Plan To Give All Public Schools' Money To The Duggar Family! 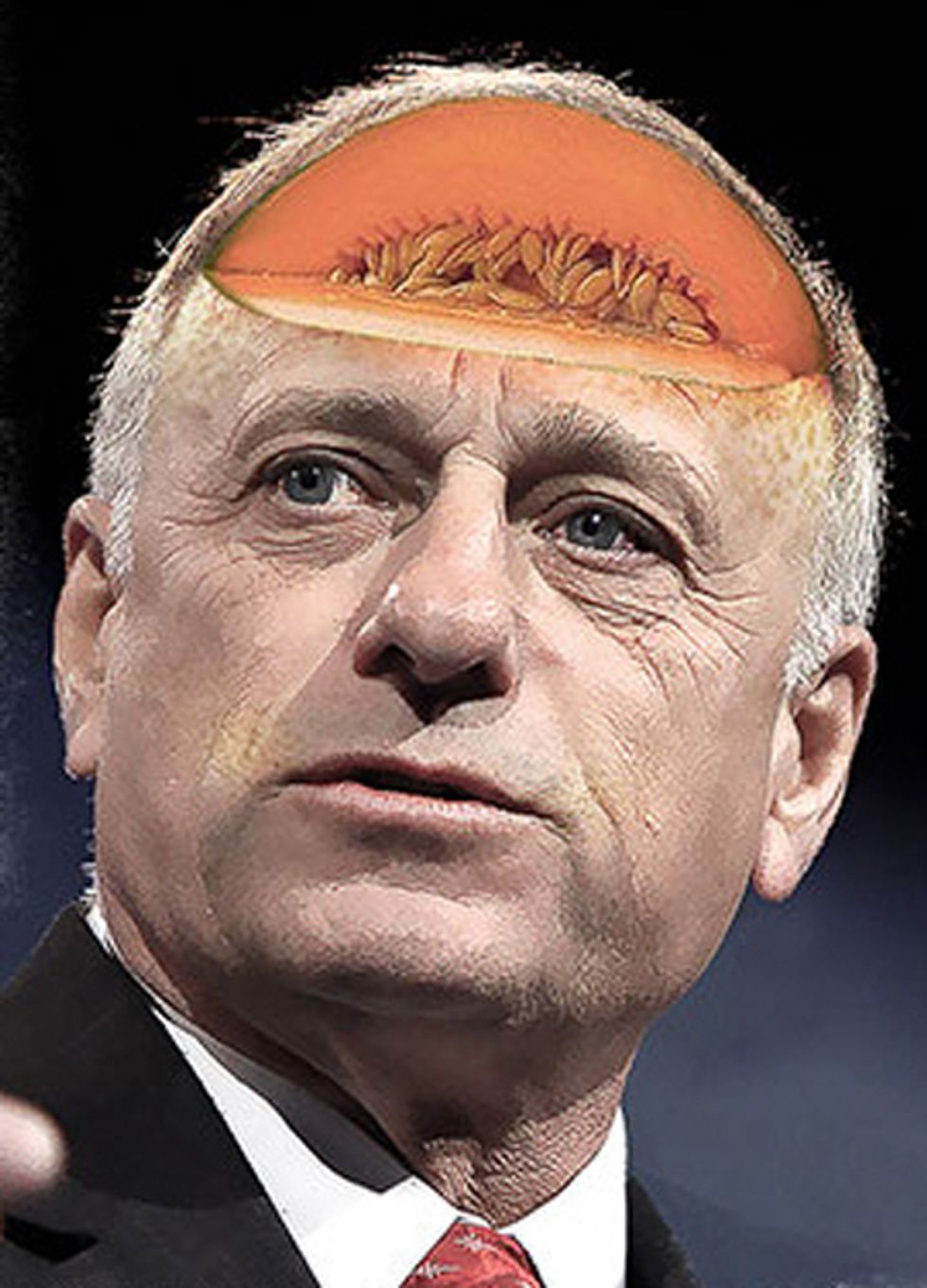 We wish we knew who did this so we could give 'em credit!

Now that Betsy DeVos has been installed as Secretary of Education, all sorts of fascinating plans to dismantle the public schools and replace them with "choice" are getting thrown into the maw of Congress. Hard to say which ones will pass, but one of them, sponsored by Iowa Rep. Steve King, is a real stinker: HR 610, the "Choices in Education Act." We'll give it this much: It's a pretty sweeping revision of the role of the federal government in education, if by "sweeping" you mean tossing public schools onto the floor, grabbing a broom, and throwing them into the trash.

Just for starters, the bill would repeal every last bit of the 1965 Elementary and Secondary Education Act, which currently governs federal involvement with schools, and replace it with a set of block grants to states. The Secretary of Education's only job would be to process each state's grant application, which seems like a special favor to Betsy DeVos, simplifying her duties considerably. There would be no federal standards for accountability, and the money disbursed in block grants would be evenly divided among all the school-aged children in each state: The same amount of money for each kid, regardless of their family's income, for each family to buy education from a public or private school, or to homeschool their kids. Kids with special needs? Fuck 'em, no mention of extra funds for them. This is about equality, damn it. If your little autistic kid needs an aide, then you'd better go get a job (or an extra two or three jobs) to pay for that, or hope that a charity will help. Now, to prevent waste, vouchers for homeschooled kids "shall not exceed the cost of home-schooling the child," which should certainly encourage parents to learn creative math to prove homeschooling would definitely cost any state's maximum amount per child.

Hey, wouldn't a huge giveaway of taxpayer funds to private religious schools cause a little Separation of Church and State problem? Heck no! It says so right in Section 105(c):

Payments to parents under subsection (b)(5) shall be considered assistance to the eligible child and shall not be considered assistance to the school that enrolls the eligible child. The amount of any payment under this section shall not be treated as income of the child or his or her parents for purposes of Federal tax laws or for determining eligibility for any other Federal program.

So it wouldn't be government support of religion, not one bit! The funds would go to the parents, you see, and then it's their choice to either spend in a secular public school (which would still presumably be nominally bound by the First Amendment) or at Joe Bob's Jesus Is Lord Smite The Sinners No Homos Academy of the Holy Spirit, LLC.

Another fun detail: The vouchers would only go to parents of children aged 5 to 17, so if a kid doesn't finish high school before they're 18, tough shit. Get a job. Or another job.

Also, the other main part of the bill is the "No Hungry Kids Act" which wouldn't actually keep any kids from going hungry, but could just as well be titled the "Fuck You Michelle Obama, We'll Give Kids All the Tater Tots They Want Act of 2017." It would repeal federal nutrition guidelines for school lunches and prohibit the government from establishing "a calorie maximum for individual school lunches." And because some school somewhere may once have sent a letter home suggesting that a bag full of Twinkies and Doritos wasn't terribly nutritious, it would make it illegal for schools to "prohibit a child from eating a lunch provided by the child’s parent or legal guardian."

Here's the encouraging thing, if there is anything encouraging about this dog's breakfast (unsubsidized) of a bill: Not only is it opposed by the education establishment and liberals, it's also anathema to rightwing libertarian homeschoolers, because -- get this! -- it would be far too oppressive for them, since they're convinced it would inevitably lead to government regulation of homeschooling. You see, according to the Home School Legal Defense Association (HSLDA), HR 610's repeal of the 1965 Elementary and Secondary Education Act would also eliminate language HSLDA had lobbied for in the most recent reauthorization of the education law that prohibited any federal regulation of homeschooling. Worse, in the weird logic of hyper-libertarian homeschoolers, the law's guarantee of a "right to homeschool" would actually be oppressive, since it would mean that right could later be taken away. RIGHTS COME FROM GOD AND WE DON'T NEED TO WRITE THEM DOWN.

Our favorite objection, though, is this complaint by HSLDA: Since the funding formula depends on dividing the block grant by the number of eligible school-aged children in any state, that means the states would "need to track homeschooling students," which you might think is unobjectionable since that only involves a head count. No, not in Wingnut Freedomland: If state education authorities know you're home-schooling your child, then that's a HUGE infringement on your right to be left alone by the mean old government.

It would be just like with guns: If the government can register your children, that's obviously the first step toward confiscating them. Finally, HSLDA warns the limitation on the amount of the voucher to the actual cost of homeschooling your darling is a hidden trap that would eventually dictate curriculum, since federal money always comes with strings attached. Why, eventually parents might have to teach only government-approved "facts," like evolution, global warming, and the ungodly notion that Earth orbits the Sun.

In short, HR 610 is a terrible idea that should go nowhere, and there's good reason to hope Steve King's terrible rightwing education "reform" may ultimately be defeated by people who are even more batshit crazy wingnuts than King is.