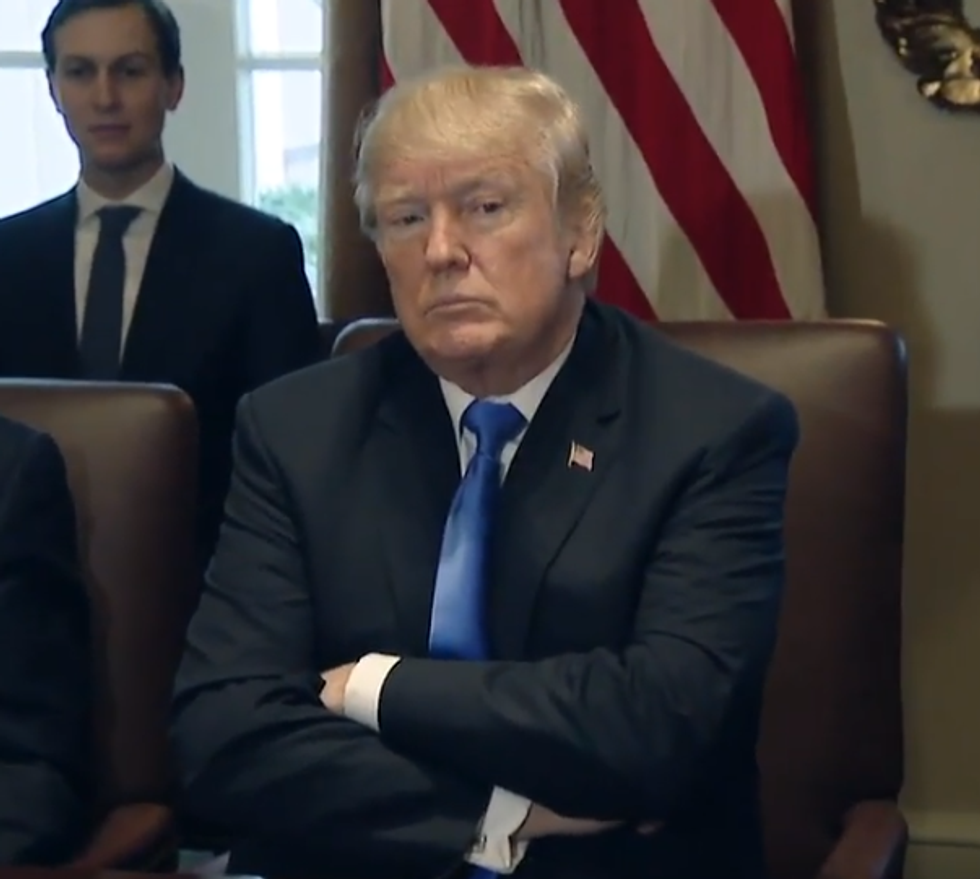 This shouldn't surprise anyone at all: Donald Trump demanded that White House employees sign nondisclosure agreements just like at the Trump Organization and during his campaign, according to a story by Ruth Marcus at the Washington Post. The good news, probably, is that government employees have more rights to free speech about their public service than private employees, so the things are probably unenforceable. One hopes.

Marcus reminds us that Trump was looking forward to trying to muzzle government employees even before he was "elected" -- in an April 2016 interview with Bob Woodward and Robert Costa, the Great Man was already thinking it through:

And I don’t know, there could be some kind of a law that you can’t do this. But when people are chosen by a man to go into government at high levels and then they leave government and they write a book about a man and say a lot of things that were really guarded and personal, I don’t like that. I mean, I’ll be honest. And people would say, oh, that’s terrible, you’re taking away his right to free speech. Well, he’s going in.

Trump apparently didn't learn a heck of a lot from his other attempts to sue unflattering books out of existence. He is at least consistent in one thing: He doesn't read, and he knows reading is bad, so he doesn't want too much reading going on.

The NDAs were instituted in the first few months of the Trump administration after Trump got very unhappy about leaks that made him look bad, and while some of the senior staffers told to sign the agreements objected, they eventually gave in, "concluding that the agreements would likely not be enforceable in any event." The staffers were pressured to sign the things -- which threaten heavy financial penalties for any violations -- by former chief of staff Reince Priebus and by the White House Counsel's Office, which you'd like to think would know better.

One of the people who signed such an agreement said the document was ludicrously broad in scope:

[This] confidentiality pledge would extend not only after an aide’s White House service but also beyond the Trump presidency. “It’s not meant to be constrained by the four years or eight years he’s president — or the four months or eight months somebody works there. It is meant to survive that.”

Marcus notes that while White House employees have always had some kinds of confidentiality requirements -- no leaking classified stuff, no violating attorney-client privilege, that sort of thing -- the NDAs imposed by Trump are "constitutionally repugnant":

“This is crazy,” said attorney Debra Katz, who has represented numerous government whistleblowers and negotiated nondisclosure agreements. “The idea of having some kind of economic penalty is an outrageous effort to limit and chill speech. Once again, this president believes employees owe him a personal duty of loyalty, when their duty of loyalty is to the institution.”

Marcus wasn't able to get her hands on a copy of the final version of the NDA, but saw a draft, and says it's "a doozy":

It would expose violators to penalties of $10 million, payable to the federal government, for each and any unauthorized revelation of “confidential” information, defined as “all nonpublic information I learn of or gain access to in the course of my official duties in the service of the United States Government on White House staff,” including “communications . . . with members of the press” and “with employees of federal, state, and local governments.”

She says the $10 million-per-disclosure provision was almost certainly reduced in the final version, not simply because it's insane (the whole idea is insane) but mainly because nobody she spoke to remembered such a huge amount, which is pretty memorable.

Just to add to the weirdness, the NDA prohibits even

the publication of works of fiction that contain any mention of the operations of the White House, federal agencies, foreign governments, or other entities interacting with the United States Government that is based on confidential information.

Not that anyone was going to read Rex Tillerson's torrid romance novel Executive Time anyway, but that's still nuts. The agreement applies to White House aides while they work there and "at all times thereafter." Yr Wonkette is also concerned about the line requiring the agreement be signed in the employee's own blood during the dark of the moon.

As far as whether the things can even be enforced, Marcus says the whole sorry mess is

so ridiculously excessive, so laughably unconstitutional, that I doubted, when it first came my way, that anything like it was ever implemented — only to do some reporting and learn otherwise.

Considering all the people who have already been shitcanned from the Trump White House, we're sure it won't be long before Team Trump tries to enforce one of these things in court -- at least, we think we still have those.

Yr Wonkette is supported by reader donations. Please click here to send us money, and we'll stay quiet about it. We saw something nasty in the woodshed.