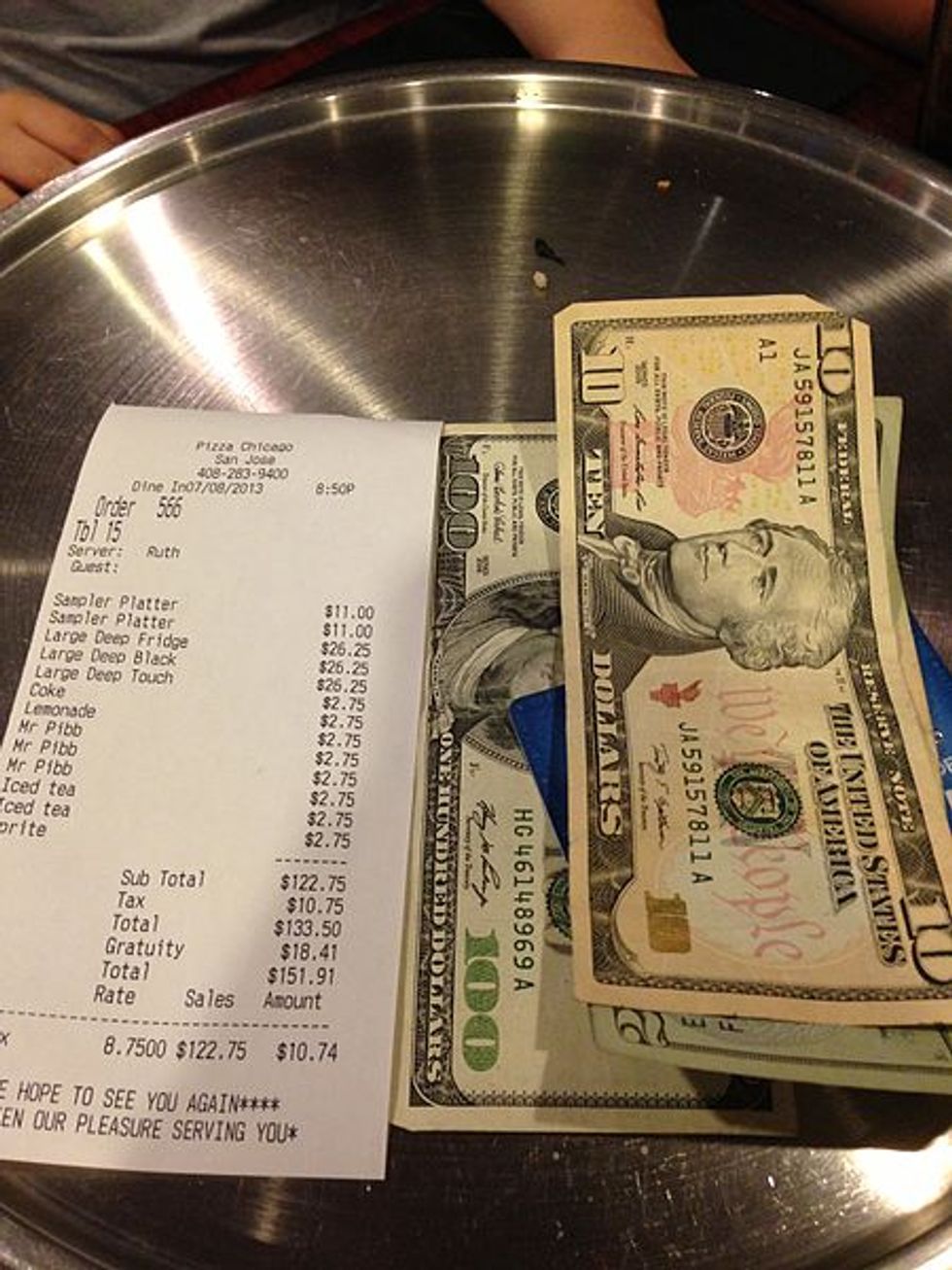 Oh good: a new study is out that purports to show that the tipping system is actually good for servers and bartenders. We're sure this won't devolve into a smugly dickish thinkpiece-off about tipping (again).

The study (we feel ill even using this word, and you'll see why in a few short paragraphs), from the University of California-Irvine and economics professor Richard B. McKenzie, purports to show that actually, servers would be way worse off if we abolished tipping and replaced it with a livable wage. The incredible thing about his thesis is it manages to be both deeply stupid and actually kind of right at the same time -- albeit in a very weird way.

There are some obvious flaws with this thing, such as that it's not even fair to call it a "study." Its first sentence reads "The practice of tipping restaurant servers and bartenders is under attack," and that should tell you everything you need to know about the author's perspective. There is also this sentence, which made our brains briefly blue screen and required a full reboot:

Tipping aligns the incentives of servers and managers and owners for a common objective — to make people’s restaurant experiences a win for everyone.

As far as the issues: first, the "study" is conducted using a pathetically small sample size. For fuck's sake, a survey of 40 servers and bartenders? What, did McKenzie decide stopping by one Applebee's and one T.G.I.Friday's was enough and that he didn't need to complete his planned trifecta with Cheesecake Factory? Also, are you really trying to point to Orange County, California -- where the median income is $73,560 -- as being representative of the United States as a whole? Because, uh, no. That's not ... no.

Second, and more importantly, the "study," such as it is, assumes that in the event tips were banned and server wages replaced by a flat hourly wage of $15, all restaurants everywhere would simply pay their servers $15. From your local 24-hour diner to Per Se, every server in America would make exactly the same amount.

Do ... do we need to explain why this is a dumb thing to say? Do we need to point out that were a new wage baseline established, wages would ultimately adjust to that baseline? There's no way fine dining would pay servers the same amount as Friendly's for the simple reason fine dining requires more experience and is a more demanding job -- you can bet your sweet bippy the best restaurants are going to wind up paying for the best servers. Were the two wages exactly the same, the best servers would be financially incentivized to seek out the easiest jobs possible, since pay became irrelevant. And that trend will travel all the way down the line -- there's no way servers are going to make the same amount at the Asscrack Diner as they would at a place like Ruby Tuesday.

Here's the thing, though: while McKenzie's methods are laughably flawed, he's not entirely wrong! There are a lot of servers that would make less money with a flat $15 hourly wage (leaving aside the whole "that's not what would happen, Professor who supposedly understands economics" thing) than they do under the current system, especially in fine dining. To deny that would be rampant insanity.

But here's the part McKenzie (and everyone else) seems to constantly forget: there are more options than he presents. We have a tendency to make the mistake of thinking the only possibilities in the tipping wars are the current, admittedly abusive system or eliminating tipping altogether, 100% of the time. Were tipping outright banned, yes, a lot of servers would make less money.

But this needn't be a binary. There are a whole host of options between "servers NEVER make tips" and "servers ONLY make tips." There's the percentage of sales model, where servers can pick between a base hourly wage or 20% of their total sales at the end of every shift. There's doing what some other countries (notably England) do and occasionally tipping for exceptional service (at significantly reduced levels from the US), but not making it an obligatory part of the social contract.

There is absolutely no reason the alternative to "servers don't make an hourly wage, but hopefully make up for it in tips" has to by necessity be "NO ONE TIPS EVER, TIPPING IS UTTERLY AND COMPLETELY BANNED." We may be internationally renowned for our stupidity in many areas (and with good reason), but Americans -- yes, even Trump voters -- can understand the concept of not having to tip, but being allowed to if we want. Hell, a three-year-old can understand that, so let's stop treating it like those are the only two options.

And most of all, let's stop conducting studies based on an unrealistic understanding of the options in front of us. How about let's start there?