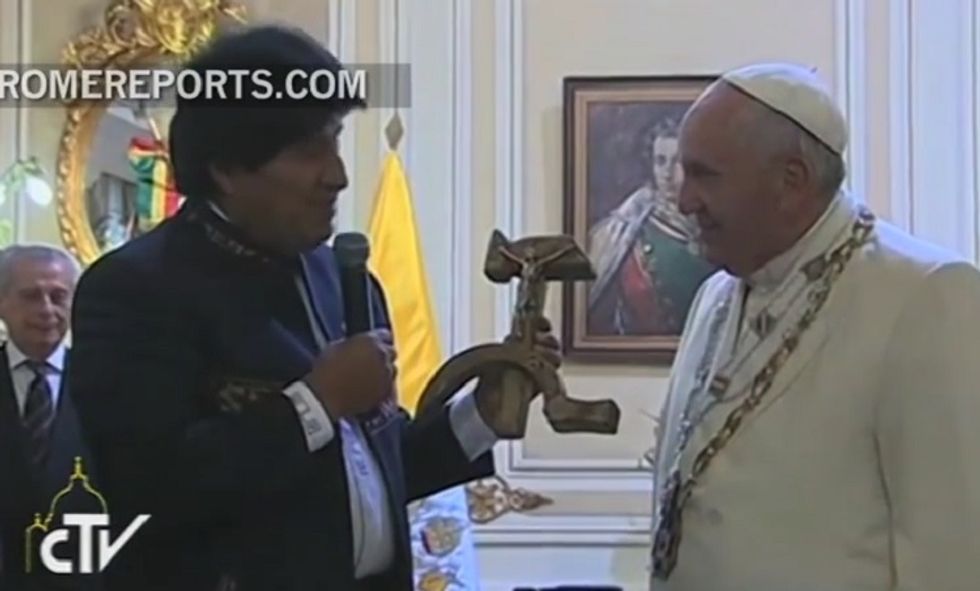 Former Stupidest Man on the Internet Jim Hoft (now demoted to merely a Stupid Man) made a pretty strong bid to regain his title Thursday with a seriously dumb post pointing out that Pope Francis smiled -- the commie jerk! -- as Bolivian President Evo Morales handed him a gift of a crucifix depicting Christ on a hammer and sickle:

Wait, doesn't Hoft himself say New Pope is "not so enthused" by the commiefix? How does he square that with his own headline? Easy: he is very stupid. Ah, but wait, said Hoft -- just look at the video! The Pope is smiling! Shock and horror!

Hoft, who's become rather fond of calling New Pope "Red Francis," also gravely reminds us that "Francis frequently speaks out on global redistribution of wealth." As everyone knows, Francis is intent on worldwide communist revolution, or at least some restraints on the evils of unfettered capitalism, which are the same thing.

Well then, guess that seals it! Francis was just delighted to see Jesus combined with a communist emblem! Except, of course, for teensy details like the fact that Francis said to Morales, "No está bien eso" -- depending on your translation, either "This is not OK" or maybe "That's not right."

Still, he was smiling, and smiling can only mean 100% approval, as everyone knows from seeing video of diplomats politely shaking hands and smiling before negotiating over all the stuff their countries can't stand about each other (it means the diplomats are secretly boning).

Not that context matters -- because people are either good or evil, freedom-loving free-marketeers or oppressive commies, and a smile can have only a single meaning -- the Telegraph notes that the crucifix was a reproduction of one carved by Father Luis Espinal Camps, a Jesuit priest who was killed by a rightwing Bolivian death squad in 1980. After arriving in Bolivia Tuesday, Pope Francis had stopped to pray at the location of Espinal's assassination -- not that any of this would be pleasing to Hoft, since Espinal was murdered while staying with the families of striking miners, who were obviously union thugs and communist rabble, too.

[Obligatory disclaimer: We like New Pope a lot more than the institution he leads, and appears to be trying to steer in a less horrible direction -- and yes, it has been and continues to be pretty regressive. As we've said before, Francis has raised our opinion of the Catholic church all the way up to "ambivalent," which is the highest it's been in decades.]

The Catholic News Service also says that there's some confusion over Morales's intent with the gift -- was he trying to embarrass the Pope, suggest that they're fellow commies, or what?

At a July 9 press briefing the Holy See press officer, Fr. Federico Lombardi, noted the lack of clarity in the audio of the exchange, and remarked that Pope Francis had been unaware the crucifix was a replica of Fr. Espinal's.

He also claimed that Fr. Espinal's use of it was not ideological but expressed a hope for dialogue between communism and the Church, adding that Pope Francis' remark likely expressed a sentiment of “I didn't know”, rather than “This is not right.”

Why, that sounds less like an enthusiastic embrace of a communist icon than a puzzled reaction to a gift whose significance was ambiguous -- in other words, the sort of thing that would lead someone to smile politely and grit their teeth until the cameras went away. But where's the shock in that?

We can hardly wait until the Pope comes to the USA and some idiot hands him a crucifix wrapped in a Confederate flag.