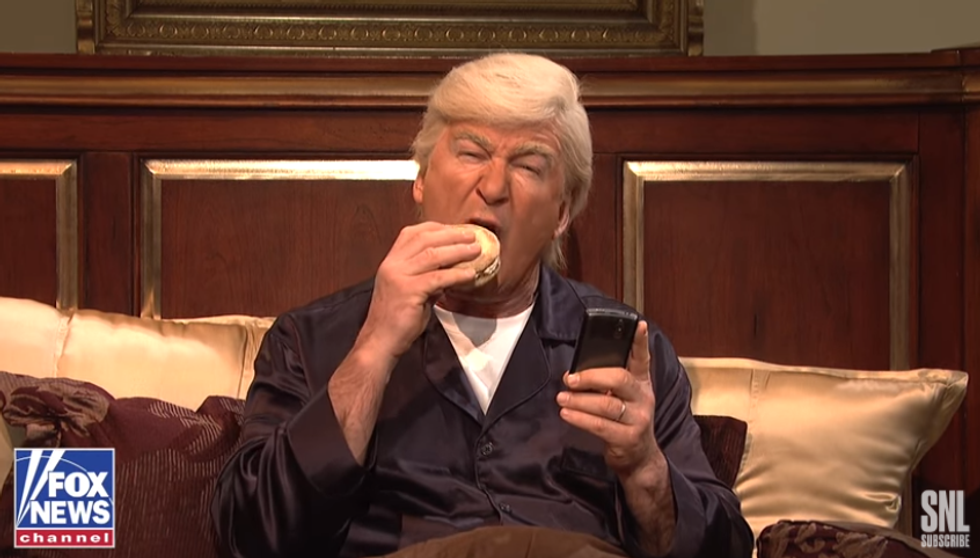 Earlier this week, after firing the secretary of State on Twitter, your moron president said this:

I'm really at a point where we're getting very close to having the Cabinet and other things that I want.

Uh huh. It's only taken Trump a little over a year to go through his original D-list cabinet appointments, and weed out the ones who were at least smart enough to know he's a fucking moron, and now he's free to dumpster dive for a cabinet that's more to his liking. Great. Just great.

This obviously means more firings are coming, probably on Twitter, because Trump is too sissy to fire people to their faces. "We need a president who knows how to run a business," they said, because they are very stupid people who think the United States Government is a lot like a business. Unfortunately, they elected a businessman who isn't good at business. :(

Gabe Sherman has a lovely new report in Vanity Fair about all the rest of the changes Trump wants to make, now that he thinks he has become good at being president. STOP LAUGHING, he's a delusional old man who thinks he has value as a human being! It's sad, but it's what it is:

“The president is finally realizing he is the president,” a former White House official told me. “He’s just making these decisions on his own.”

Jesus fuck, President Shit Waffle is makin' decisions on his own, hide your kids, hide your wives!

The biggest and most dangerous possible firing that's being rumored around Washington, and reported by Sherman, is that Trump is yet again thinking about firing Jeff Sessions (because Jeff Sessions is BAD because he RECUSED HIMSELF from the Russia investigation) and sticking EPA administrator Scott Pruitt in as the acting attorney general. Pruitt is, of course, a dangerous idiot and a total Trump slut, so the thinking is that, since Pruitt wouldn't be recused like a common Jeff Sessions, he could fire Robert Mueller or severely limit Mueller's ability to do his job. We've said it before and we'll say it again, but get ready to TAKE TO THE STREETS, and also maybe TAKE OVER THE STREETS, if that happens, because that would be Trump's Saturday Night Massacre and a straight-up Constitutional crisis.

But wait, there's more! According to Sherman, the very next to go will probably be National Security Advisor H.R. McMaster, who, like Rex Tillerson, correctly thinks Trump is a fucking moron. And you're gonna just love his replacement:

Bolton has for years argued that the United States should pre-emptively attack Tehran. In 2015, he wrote a New York Times op-ed headlined, “To Stop Iran’s Bomb, Bomb Iran,” and last month, he wrote a Wall Street Journal op-ed outlining the legal case for a pre-emptive strike against North Korea.

According to a person who spoke with Bolton after the meeting, Bolton recalled that Trump said he wanted him to join the administration: “We need you in here, John.”

Did we already say hide your kids and hide your wives? Probably should just dig a bunker in your backyard with enough food for a few hundred years once that motherfucker is rubbing his mustache all over the West Wing.

As Sherman tells it, Bolton said he would only accept national security adviser or State, and Trump's already picked Little Man Syndrome blowhard Mike Pompeo for State so ... fuck.

We are particularly amused/horrified by Trump's latest grievance about McMaster:

But Trump wouldn't understand that, because he's an inept trash hole.

Oh also John Kelly might get fired soon, or maybe he won't, and maybe Ivanka and Jared will move back to New York City for a few months before Jared goes to prison, but maybe they won't, guess we'll just have to keep DVR-ing this really stupid reality show to find out, the end.