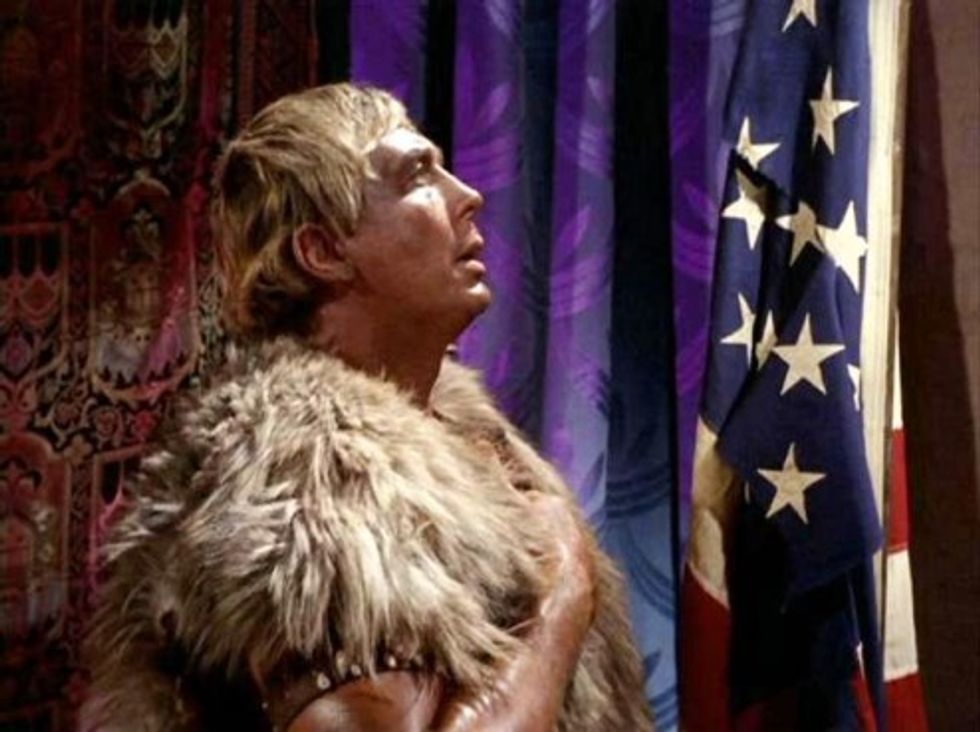 Here is the latest outrage against all that is good and holy and just in our once-proud nation: According to theStupidest Man on the Internet, Jim Hoft,

"Rocky Mountain High School in Fort Collins replaced “under God” in the Pledge of Allegiance with “under Allah.”

My god! What is our country coming to? Creeping Sharia has crept right into the National Prayer and killed God dead!

Say, would this be a good place to point out that if the Pledge hadn't been meddled with by God-botherers in 1954, this never would have happened?

Also, too, there's the teensy detail that's not quite clear from the panicky headlines from Hoft and from the original source, Fox Radio's professional martyr Todd Starnes: this was a one-time dealio, as part of a regular activity that the school's "Cultural Arms Club" does from time to time, leading the school in the Pledge in different languages. But once is all you need to set Sharia a-creeping up and down the halls of a high school apparently.

So, which high school administrator should probably consider getting a bit of extra security for the school this week, Todd?

Tom Lopez, the principal at Rocky Mountain High School in Fort Collins, told Fox News he has received a number of telephone calls and emails from outraged parents – but he stands by his decision.

“These students love this country,” he said. “They were not being un-American in trying to do this. They believed they were accentuating the meaning of the words as spoken regularly in English.”

Ah, but what is the Cultural Arms Club anyway, and what exactly are these young radicals arming themselves for, anyway? Jihad, maybe?

The club seeks to “destroy the barriers, embrace the cultures” that exist within the high school.

OK, so you've got an armed group that has pledged itself to destroying the borders, huh? Say no more!

Starnes does let the paid shill for the America-haters in the Fort Collins school district try to downplay the seriousness of this assault on our values:

Danielle Clark, communications director of the Poudre School District, said they understand why parents are upset.

“We understand not everybody would agree with the students’ choice,” she told Fox News. “We’ve heard there are some who are upset.”

On the other hand, she said she received one email from a person who “thought it was a great thing.”

Clark said the cultural club has a history of reciting the Pledge of Allegiance in a number of different languages.

Last year, the group found itself in a firestorm of controversy after reciting the pledge in Spanish.

Great, so we're now one nation under Allah, and also under Dios? Nauseating. Where did anyone in this so-called "school" get the idea that "culture" or languages other than English even belong in an American High School, anyway? We bet that Thomas Jefferson was quite content to only speak one language, as God wanted it to be.

Clark clarified that since it's a student-run club, it has "no school sponsor or advisor. It doesn’t come under the umbrella of the district,” which frankly sounds like anarchy and socialism. Who even knows what those little terrorists are getting up to while no one watches them?

Students in the club were completely clueless as to the nature of the offense they'd perpetrated:

“No matter what language it’s said in, pledging your allegiance to the United States is the same in every language,” student Skyler Bowden told The Coloradoan.

Starnes comes dangerously close to admitting that "Under God"  -- or "under Allah" -- in the pledge has the effect of an official endorsement of religion, now doesn't he? Were it purely a "ceremonial deism," the name of the deity wouldn't matter, you'd think.

We suppose we can give Starnes a tiny bit of credit for including -- without comment -- a linguistic observation from Ibrahim Hooper, of the Council on American Islamic Relations (which Starnes somehow doesn't claim is a branch of the Muslim Brotherhood -- he is so going to get scolded for that omission!). Said Hooper, in an obvious attempt to confuse the issue,

OK, but just answer this, Mr. terrorist sympathizer: How many Christian churches does the Saudi government allow to pray to Real God in Saudi high schools, huh?

For balance, Starnes adds this important point from a distraught Fort Collins letter to the editor:

“This is no longer about language,” wrote one reader in a letter to the local newspaper. “This is about targeting a group you know will object, intentionally stirring them up under the guise of your opinions on multiculturalism and subjecting your school and community to a divisive issue for absolutely no gain.”

How very true that is. Students who celebrate other cultures are just deliberately poking a stick into the eye of easily-provoked wingnuts like Starnes and Hoft and their Internet Flying Monkeyrage Brigade.

Other comments on the Daily Coloradoan website (the comments now appear to have been deleted for some reason) explained exactly what was horrible about these kids and their blasphemy:

“As a veteran and a friend of a man killed defending these children in their little games they like to play with our pledge, I’m offended,” wrote Chris Wells on the Daily Coloradoan. “There are things that we don’t mess with – among them are the pledge and our anthem.”

“If they wish to adapt the country as their own, then they need to learn the language and start speaking it as their first language,” wrote another reader.

Absolutely right, damn it. If you're going to be an American, you better goddamn well not learn other languages, or you're insulting the memory of those who died so that you could be free to not learn those filthy heathen tongues. Also, if you study a foreign language, you have apparently become an immigrant of some kind, especially if your school's principal is named Lopez.

We'll give the last word to Mr. Jim Hoft, the Stupidest man on the internet, who closed his excerpt of Starnes' piece with this lament:

The Founders are rolling in their graves.

Heaven knows, they would all be nauseated to see such a disgusting profanation of a 1952 addition to the Pledge of Allegiance, an oath that would have been every bit as familiar to them as "A Bicycle Built for Two," which was also composed in 1892.