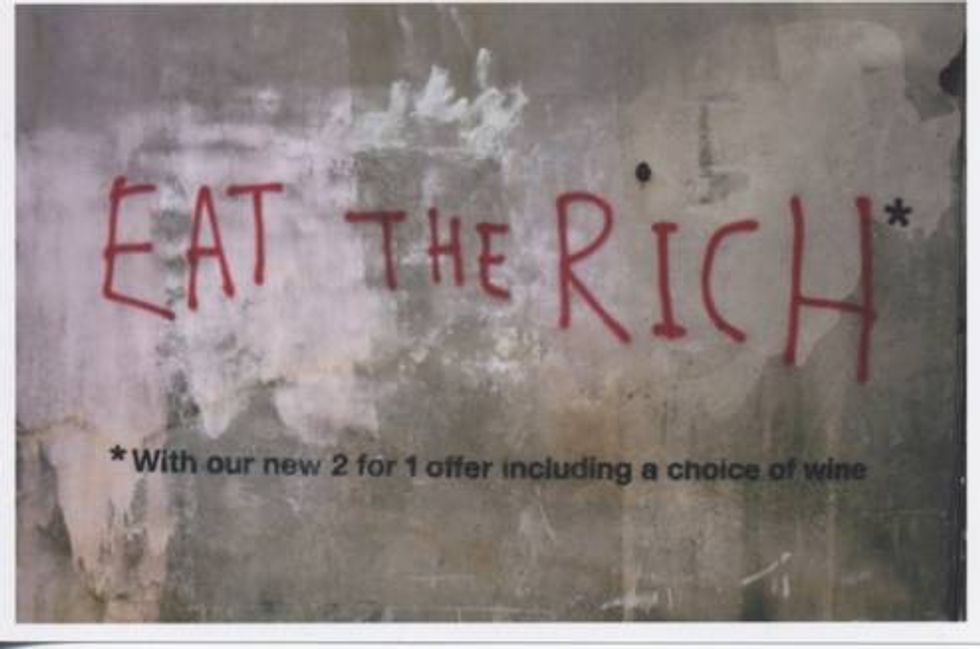 Shutdown, shutdown, shutdown. Stories about what we already know, but are nonetheless stupidly depressing, like the fact that planning for the shutdown wasa long time a'comin:

A defunding “tool kit” created in early September included talking points for the question, “What happens when you shut down the government and you are blamed for it?” The suggested answer was the one House Republicans give today: “We are simply calling to fund the entire government except for the Affordable Care Act/Obamacare.”

Genius strategy AND so great for the nation. Good job, GOP!

Related to the last, because we could really fill the entire NYT with Tea Party dickishness, an article about how the GOP's planned cuts to food stamp programs pretty much ensures poor people don't have the luxury of healthy food because fuck 'em:

According to research by the Food Bank for New York City, the price of food in the New York metropolitan area rose by 16 percent between December 2007, the start of the recession, and the end of last year, with 32 percent of New Yorkers in 2012 reporting difficulty paying for the food they needed. Those dependent on government subsidies to supply their tables will feel these increases more harshly as cuts to the federal Supplemental Nutrition Assistance Program (or SNAP, as the food stamp program is called) go forward.

Before the government ceased operations, as you may recall, House Republicans were busy trying to ensure $40 billion in cuts to the program. Whatever further reductions are promulgated at the Congressional level will come in addition to predetermined cuts already scheduled to go into effect on Nov. 1.

Seriously, you guys, it takes some serious work to be this terrible. Republicans must have to steroid bulk up on awful in order to reach these lows. They're like the Barry Bonds of destroying people's lives.

Speaking of the poors, there's a really beautiful slideshow of the 1990s-era squatters buildings, all taken by a young photographer who lived in the squats from 1992 onward.

Would you like to just get stone cold mad at rich people if you aren't there already? Then just check out the little travel vignette about how losing your luggage is so freeing, really:

It was a stroke of luck, really, that my luggage was lost when I flew to Italy this summer to visit the jewel box villages of the Cinque Terre -- five heart-stoppingly picturesque hamlets on the Ligurian coast, dotted with pastel houses nestled amid terraced hills that drop to the jade and lapis waters of the Mediterranean. All I had with me were my eyes and feet. For the next few days, that would be all I needed. Unencumbered, I could leap lightly onto trains and trails, feeling sorry for the heavily laden travelers around me, even as I mourned the absence of my hiking sandals.

So freeing! Except when most of us lose our luggage, we actually lose, you know, things we need. However, we are also not traveling to "five heart-stoppingly picturesque hamlets" anywhere, so maybe we'd feel all loosey-goosey if we lost our possessions there too. Hahaha we will never go there and neither will you.

Still not disgusted/depressed enough? Howzabout the apartment in Trump Tower that sold for a cool $15 million? It has six terraces. It has silk wallpaper. Only peasants opt for five or fewer terraces and regular old paper wallpaper. Sad bastards.

Not ready to take to the streets yet? Why not read this lovely article about how the rich lack empathy for the poors because of course they do.

A prerequisite to empathy is simply paying attention to the person in pain. In 2008, social psychologists from the University of Amsterdam and the University of California, Berkeley, studied pairs of strangers telling one another about difficulties they had been through, like a divorce or death of a loved one. The researchers found that the differential expressed itself in the playing down of suffering. The more powerful were less compassionate toward the hardships described by the less powerful.

OK. now that you're all joining Occupy Wall Street or whatever the hell direct action thing still exists, it's time to put on some body armor and face the obligatory terrible trio of Dowd, Friedman, and Douthat. The online version of the Sunday paper moves the unillustrious Mr. Douthat's column back and forth between Editorials and Sunday Review, thus creating a slight leap of joy when you realize he didn't write this week, followed by a crushing sadness when you realize he did.

Oh -- before we tackle these people, let's comfort ourselves with some actual factual legit writing and reporting, shall we? If you're not reading the articles that are part of a regular collabo between the NYT and the Texas Tribune, you are missing out, because whither Texas goes, there goest the nation, especially where education is concerned. This week in the "Nobody Could Have Predicted" department, we find out that one o'those nifty public/private education mindmelds was just a big corrupt money suck:

As early as 2009, school administrators began reporting claims of falsified invoices, overly aggressive student recruitment and questionable instructional methods. They doubted the academic benefit of such programs — something internal agency evaluations had already suggested and soon confirmed. They detailed the use of iPads, phones and laptops as incentives for students to enroll in the services. They described instances of company representatives paying students and teachers to recruit for their programs and showing up on school property without permission or criminal-history background checks. One East Texas principal expressed alarm that the owner of a tutoring company working on campus was also listed on an adult entertainment Web site.

This is depressing as fuck, but is actually informative rather than 1000+ words of bad dystopian fiction from Maureen Dowd:

In 2084, there’s little sign of life in the godless and barren lost world. The insurance exchanges are open and the kinks are almost ironed out. But there is no one to sign up. Koch brother drones patrol the skies. A Mad Max motorcycle gang wielding hacksaws roars through the C.I.A., now a field of dead cornstalks, and the fetid hole that was once Michelle Obama’s organic vegetable garden. Will Smith and Brad Pitt are here, hunting aliens and monsters.

Lolsob. Usually one has to troll the depths of bad fanfic on the internet to get sci-fi writing this bad, but this week the NYT makes sure that everyone can witness this travesty without extending any effort googling. Other sci-fi movies/books Dowd has put into this blender of mush: Hunger Games, The Road, run of the mill unspecified zombies, I Am Legend, Planet of The Apes. Also, too, China will eat us and leave us barren. A child could have written this column and at least it would have had dragons or Dementors or something. Jesus. Dowd is so bad at the writing that even when we agree with her -- Ted Cruz is indeed driving the nation off a fucking cliff! He is! -- we still can't make it through her column without going redrum levels of angry.

Similarly, Friedman's column is an unmanageable blob of disconnected namechecks, but Friedman is talking at you about foreign policy. He would like you to know that Iran is not North Korea but might be China. Don't believe it is that bad? Here's the closing paragraph of the column:

China’s leaders are not Boy Scouts either. Yet we’ve found a stable, mutually beneficial relationship with Beijing as “frenemies.” I remain a skeptic that Iran’s regime can generate the internal consensus to make a similar transition. But then few thought China could either. Secretary of State John Kerry has the right attitude: No lifting of sanctions for anything less than the airtight closure to any possible weaponization of Iran’s nuclear program. That’s the only deal worth having, and the only way Iran will decide if it really is a China in Persian clothing -- or something like that.

Let's try to parse that paragraph, shall we: China good, but not great. But we sorta like China so we're frenemies. John Kerry is right about Iran. Iran will decide if it is China. Sure. Bqhatevwr. We'll agree with anything Friedman says if we don't have to read him any more today.

Douthat would like to talk at you about his feels about NewPope and it unsurprisingly compresses into a black hole of bombast about how the liberals wreck everything:

So far, he has at least gained the world’s attention. The question is whether that attention will translate into real interest in the pope’s underlying religious message or whether the culture will simply claim him for its own -- finally, a pope who doesn’t harsh our buzz! -- without being inspired to actually consider Christianity anew. [...]

And they worry as well that we have seen something like his strategy attempted before, when the church’s 1970s-era emphasis on social justice, liturgical improvisation and casual-cool style had disappointing results: not a rich engagement with modern culture but a surrender to that culture’s “Me Decade” manifestations — producing tacky liturgy, ugly churches, Jonathan Livingston Seagull theology and ultimately empty pews.

Yep. People left the Catholic Church in droves because the church got too focused on social justice and accessibility from a liturgical perspective. If only Vatican II had never happened and little Ross Douthat could have never been bothered by English mass or caring about the less fortunate or ill-dressed ruffians in the pew next to him. Fucking NewPope is wrecking Ross Douthat's life you guys, with his focus on the poors and mebbe not hating the gays quite so much but still hating them some.

Why won't NewPope just give Ross Douthat what he wants: An unbending laser focus on alienating anyone who doesn't agree with Douthat's retrograde views? A constant harangue of culture scolding about how 'Merica is just too permissive, with its breasts all hanging out. A complete rejection of any empathy for people who have no money, no status, and no column in the New York Times. Jesus, NewPope. Get a grip and make sure you don't lose the Ross Douthats of the world, because what a catch.

Enough NYT. Time to wash away the Dowd fanfic, the Douthat dour, the Friedman babble, the endless reminders that the world belongs to the rich, by diving into a pool of cheap whiskey because that's all we can afford.