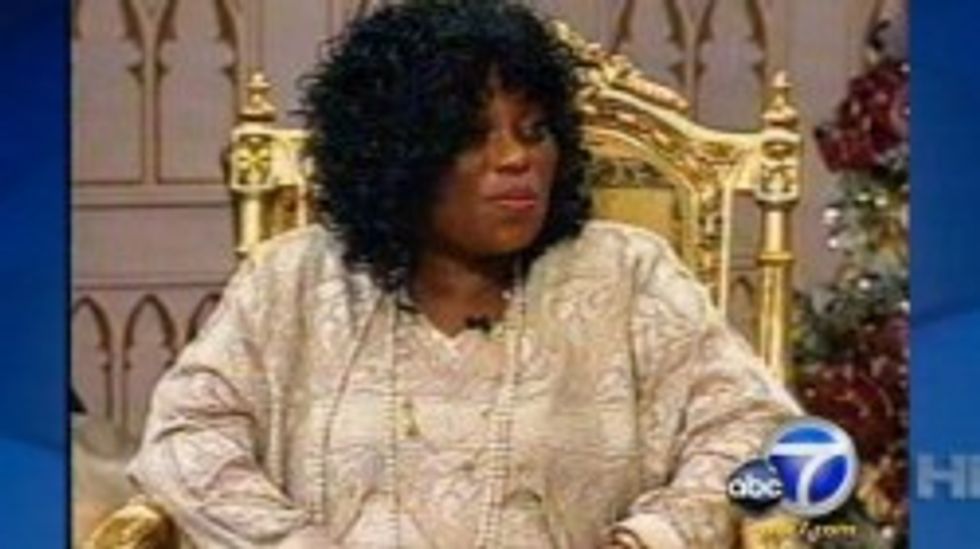 Christine Daniel is a minister and doctor (although, not, to our knowledge, a realtor, dentist, orvampire hunter) who just wanted to help the world beat cancer! She did this by going on Trinity Broadcast Network and selling a mixture of suntan oil and beef flavoring.

To people with cancer.

Man, she may have outgrifted the Crouches! (For the lord, of course.)

Now she is going to jail for 14 years, and having to give back $1.2 million (SADFACE!), just for murdering people! STOP INFRINGING CHRISTINE DANIEL'S RELIGIOUS FREEDOM TO KILL PEOPLE, NOBAMA!!!!

Tell us more about it, our much-missed colleagues at OC Weekly!

Besides cancer, Daniel claimed C-Extract cured multiple sclerosis, strokes, Alzheimer's disease, Parkinson's disease, diabetes and hepatitis, boasting a 60-80 percent success rate for the most advanced forms of cancer. Victims from around the country told Judge Timlin that Daniel instructed them to stop their chemotherapy and other traditional cancer treatments and pay her $5,000 instead for "C-Extract." One patient who paid $13,000 died a few months later.

Many reportedly said they trusted Daniel because she was a minister. She reportedly played on that faith, according to her jaw-dropping court testimony related by City News Service: "In faith-based churches, there are a lot of people who won't go to doctors. They know in their hearts that what they are saying is not correct. They know the truth, and the Lord's going to deal with this.''

Well she seems great. Very Christian, we are sure!