Sundays With The Christianists: American History Textbooks For Unreconstructed Homeschoolers 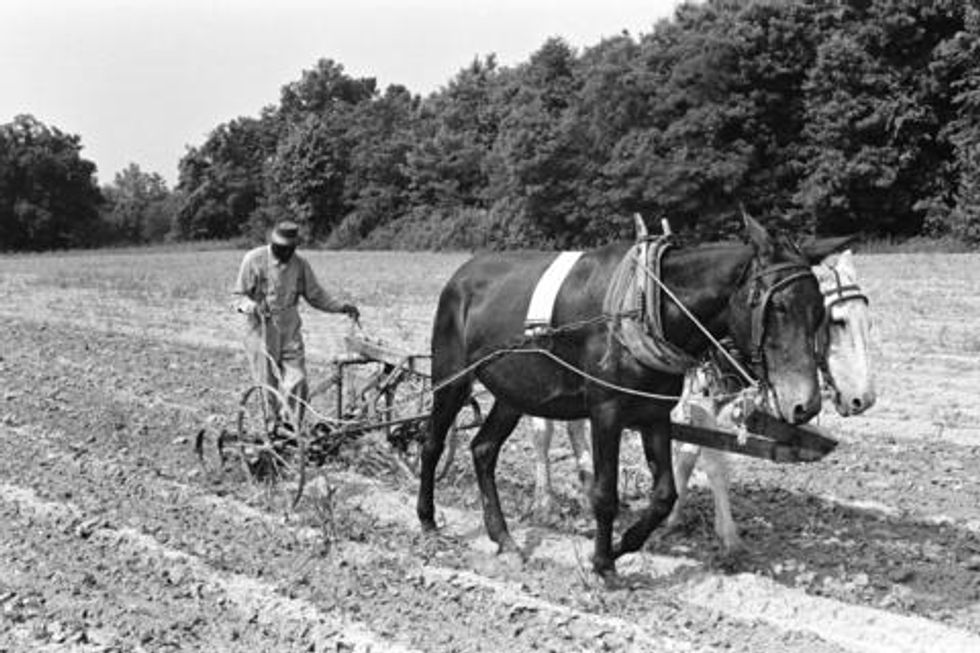 Now that we've got the Civil War out of the way, our Christian-school textbooks almost seem to settle down and relax for a bit. They had a lot of ideological axe-grinding to do in discussing the causes of the Civil War, and there's certainly a fair bit of that left over for Reconstruction, but for the most part, their coverage of the era seems fairly conventional. Needless to say, we'll focus on the weird stuff.

And as usual, our 8th-grade textbook, America: Land I Love (A Beka 1994), is happy to provide some weird. Both Land I Love and our 11th/12th-grade text form Bob Jones University Press, United States History for Christian Schools, portray Abraham Lincoln as wanting a more conciliatory policy toward the former Confederate states than the Radical Republicans in Congress, who largely wanted punitive policies. But Land I Love goes a step further and decides this would be a great opportunity to recast Lincoln as a kind of proto Ronald Reagan -- discussing the postwar Freedmen' Bureau, the book insists:

Lincoln believed that government should do only what people cannot do for themselves. Local churches, businessmen, and farmers knew what was best for their own communities. Having been a part of township and county government, President Lincoln wanted most decisions to be made at the local level.

We should perhaps be grateful that the authors don't also have Lincoln announcing, "Government is not the solution to our problem; government IS the problem."

Land I Love is also happy to reinforce the most simplistic possible view of Reconstruction and those who carried out the political rebuilding of the South. We have long suspected that some 19th-century Frank Luntz coined the two terms that every high school student knows from the Reconstruction era with the advance knowledge that they would someday be part of a multiple-choice vocabulary quiz:

Many greedy Northern politicians went South after the war, carrying their belongings in a suitcase (carpetbag). These politicians, called carpetbaggers, took advantage of the situation in the South to gain power and influence for themselves. White Southerners who assisted the carpetbaggers became known as scalawags. While many Southern whites were barred from voting, carpetbaggers and scalawags manipulated the freedmen, using their votes to support the corrupt practices of dishonest men. Selfish politicians wasted much tax money, and the South remained economically depressed.

Those poor victimized Southerners! And those poor ignorant blacks, so easily manipulated!

U.S. History seems almost revisionist by contrast, at least attributing the rise of these terms to the opinion of aggrieved Southerners, not as objective truth:

By denying the vote to many former Confederates, a coalition of blacks and white Radical Republicans was able to elect Radical governments in the South. The majority of white Southerners opposed the Radical Republican governments. They called Northern Radicals who moved to the South "carpetbaggers," after the cheap luggage made out of carpet in which most of them supposedly brought all their belongings. Southern Radicals were known as "scalawags." Not all of these men were as low and corrupt as the white majority claimed. Some carpetbaggers had come South from idealistic motives, such as aiding in the region’s recovery. Likewise most scalawags had been pro-Union men since before the War Between the States, and their behavior was not at all inconsistent with their political beliefs. However, the corruption of many Radicals, the dishonest ways in which the Radicals kept power, and the association of Radical rule with black rights all combined to embitter most Southerners against Radical rule.

U.S. History also acknowledges the very real accomplishments of many Reconstruction governments, such as establishing universal male suffrage and protecting black civil rights -- at least until Federal troops were withdrawn.

Both books discuss the rise of the Ku Klux Klan during Reconstruction, and both describe it as "extremist" and condemn the Klan's violence. You will be shocked, shocked to learn that Land I Love explains that the KKK was a regrettable over-reaction to being provoked and pushed too far:

In the face of corrupt government, some Southern whites resorted to illegal methods in attempt to improve the situation. They organized secret societies, such as the Ku Klux Klan, to remove carpetbaggers, scalwags, and freedmen from political action. These secret societies were sometimes violent and racist.

You know, a small minority of troublemakers who were sometimes violent and racist.

U.S. History has the decency not to soft-pedal the KKK:

Groups of white vigilantes terrorized parts of the South, directing their wrath against carpetbaggers, scalawags, and particularly blacks. The most important of these extremist groups was the Ku Klux Klan. Dressed in white hoods and robes that supposedly made them look like ghosts, klansmen rode about at night threatening blacks to keep them from exercising their newly gained political rights. When threats did not work, the klansmen resorted to beatings and even murder. The Klan became so successful at intimidating blacks that Congress passed legislation aimed at curbing the organization. The Ku Klux Act of 1871 broke the power of the Klan. As a result of this act, the government arrested thousands of klansmen and convicted over twelve hundred.

The weirdest spin on Reconstruction has to be Land I Love's take on the legacy of Reconstruction and the development of the sharecropping system, which appears to have been written by Grover Norquist:

The plans of politicians in Washington, D.C., for Reconstruction in the South had serious flaws. Rather than encourage local government, churches, and individual families to solve their own problems, the federal government forced its own solutions on the people of the South. The folly of political solutions can be seen in the effect Reconstruction had on agriculture. Southern plantation owners might have sold or even given unused land to the black freedmen to farm in return for a percentage of the profit at harvest. But instead of allowing the plantation owners to manage their own estates, selfish politicians forced them off the land with high property taxes. The confiscation of farmland in the South forced many farmers, both black and white, into the bondage of sharecropper farming. Sharecroppers farmed the land for a landlord, who claimed a large percentage of their harvest.

Yep. High taxes and government seizures of plantations caused sharecropping. We won't claim to be experts on agricultural history, but we're fairly certain that this paragraph is almost wholly fictional (for one thing, if the gummint seized the land, where did those landlords come from in the first place?) Maybe the story has its genesis in the "40 Acres and a Mule" experiment that General Sherman briefly imposed in some parts of the south? Comments that might help explain this fact-free nonsense are very welcome.

But sure -- blacks could have bought land with their magic money, and southern planters were SURE to give it away to the blacks, on account of how they loved them so much. But Big Government went and got in the way, the way it always does. We have no idea how widespread this myth might be on the right, but hey, here it is in a textbook, so it must be true. Remember kids, Washington just causes problems!

Next week: The Gilded Age and Why Robber Barons Were Awesome