Sundays With The Christianists: American History Textbooks That Are Close, But No Cigar 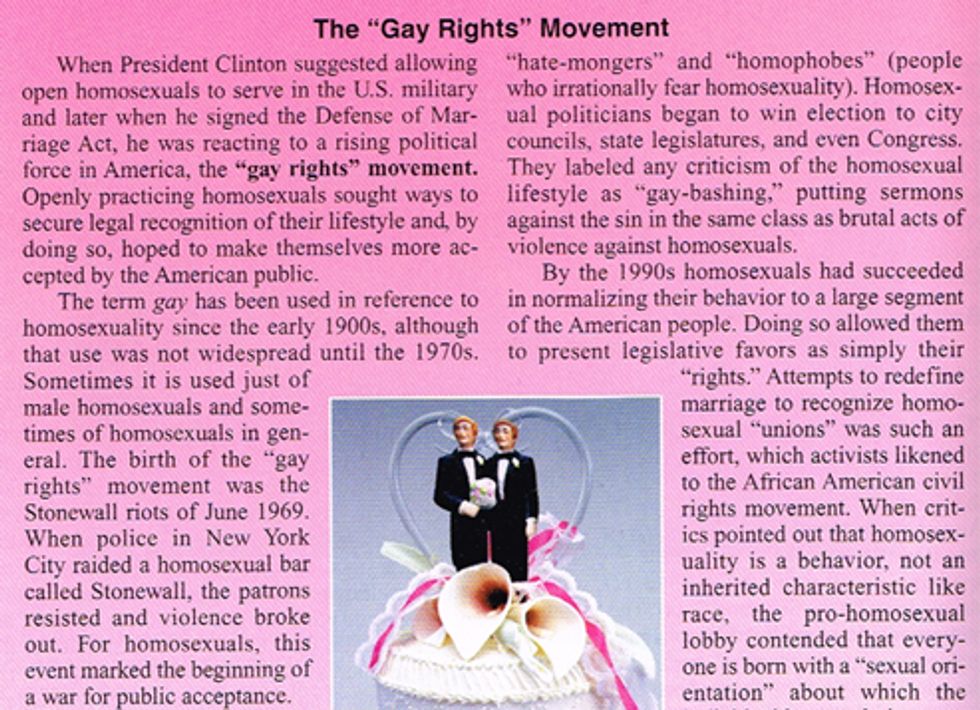 Our 8th-grade text, America: Land I Love (A Beka 2006), which is usually the more unhinged of the books we've looked at, actually says nothing at all about the Lewinsky affair, and it barely covers impeachment. An early section on Clinton's moral failings, which we've already addressed, mentions "adultery" and "marital infidelity" only in the context of the 1992 campaign, not the second-term scandal, and the single paragraph on impeachment spends most of its time explaining why Americans stupidly kept Clinton in office even though he was terrible:

Though characterized by scandal, questionable foreign policy, and terrorism both at home and abroad, the Clinton Administration benefited from a thriving economy throughout the 1990s. In fact, for many Americans, the economy was reason enough to elect Bill Clinton to a second term in 1996.

The actual impeachment gets only the briefest coverage, with no hint at all of what Clinton was accused of:

Unfortunately, the President’s second term, like his first, was marred by scandal, culminating in 1998 with his impeachment by the House of Representatives on charges of perjury (lying in court) and obstruction of justice. Bill Clinton was only the second President to be impeached since Andrew Johnson in 1868. Although the Senate acquitted President Clinton of the charges, the shame of the incident remained.

Presumably, 8th-graders don't need to know what Clinton lied about, because then they'd find out about sex, which has no place in a history book except of course to condemn it.

Our other book, the 11/12th-grade United States History for Christian Schools (Bob Jones University Press, 2002), goes into more detail about the politics of impeachment while keeping information about the affair to a minimum. It notes that while independent counsel Kenneth Starr hadn't managed to find anything in the Whitewater real estate scandal that could hang Clinton, he did find

evidence that the president had been having an adulterous relationship with a young White House intern named Monica Lewinsky and that he and his staff were trying to cover it up.

And here's just about the most salacious part of the textbook:

When the story broke, the president declared, “I did not have sexual relations with that woman ... I never told anybody to lie." He had in fact said the same thing about Lewinsky under oath in an earlier investigation. Evidence soon confirmed, however, that he had been involved sexually with her. Moreover, there was strong indication that the White House staff had tried to hinder the investigation of the matter.

There was little question that the president committed perjury, lying under oath about the relationship. He was likely guilty of obstruction of justice in not only the Lewinsky matter but also in a separate investigation in which a woman had accused him of sexual impropriety. As a result, the House of Representatives conducted an investigation marked by bitter conflict between Republicans and Democrats. Finally, in December 1998, the House voted to impeach the president -- to put him on full trial before the Senate. For only the second time in American history, the president would be tried and, if convicted, removed from office.

U.S. History notes that while Andrew Johnson barely escaped being thrown out of office in his 1868 Senate trial, where he was acquitted by just one vote, there was little question of the outcome of Bill Clinton's impeachment; where Land I Love would  -- if it addressed the issue at all -- spell out for children that this was because both Democrats and the American people were morally corrupt, U.S. History is satisfied with just strongly implying the same point:

Two-thirds of the senators would have to vote against him before he could be removed from office. The support of the Democratic minority for the president almost guaranteed that Clinton would be acquitted. Furthermore, polls indicated the American public did not want him removed from office. Many Americans apparently did not consider his behavior anything more than a private matter. Other Americans were disgusted with what the president had done, but they did not feel that "lying about sex" was sufficient grounds for removing him from office.

The textbook's summary of the trial in the Senate is as anticlimactic as the actual event was -- we get the bare facts of how the impeachment process worked ("Members of the House of Representatives conducted the prosecution while Chief Justice William Rehnquist presided") and the vote tallies on the two charges, with the very significant detail "Not a single Democrat voted against him" -- although five Republican Senators also voted "not guilty" on the obstruction of justice charges, and ten on the perjury charge. U.S. History sums up:

Bill Clinton, "the comeback kid," had survived again, and he claimed complete vindication. This time, however, his reputation was seriously damaged, even among his supporters and members of his own party.

Frankly, we were disappointed that neither textbook took the opportunity to really get crazy on the impeachment story. For all the rightwing frothing at the time, and since, about how horrifying it was that the President of the United States lied under oath, neither textbook seems willing to run impeachment through the reality-distortion matrix that we have come to expect from these books.

Happily, there are still some other culture-war fights from the '90s for each text to address. Land I Love has a stirring section on America's rich ethnic diversity, possibly wedged in to head off claims that the book is mostly the history of white people (which it is); we learn that Hispanic Americans, Black Americans, Asian Americans and Native Americans all made important contributions in the 1990s, because America remains the Land Of Opportunity. But Land I Love also reminds us that "Americans" is the most important part of one's identity, and that thinking otherwise is actually anti-Christian somehow:

Ethnic pride as taught in the home or in one’s neighborhood or community is good, but it is important to remember that we are all Americans. The desire to return minority peoples to their tribal roots and religions, a pre-Christian status, is called multiculturalism. Some have seen multiculturalism as a new form of segregation that will keep minority groups from becoming part of American culture.

We challenge the reader to find, outside of Stormfront at least, a more bizarre definition of "multiculturalism."

This section also has other beautiful moments of dumbth. We learn that the chief driver of Asian immigration to North America was the desire to flee "Communist oppression,"  that "Asian Americans have been noted for their willingness to work and make great sacrifices to give their children a good education," and that their "strong sense of family values, education, and efficiency in business made this group one of the most prosperous in the United States." You know, pretty much a model minority! Why don't you kids study hard like the Asians, huh? And then in the section on "Black Americans," we learn that "By the 1990s, black Americans had made many significant political and economic gains," and then we get a long discussion of how this fact is illustrated by the career of Clarence Thomas. There are literally no other examples of impressive achievements by black people in that section.

For its part, U.S. History devotes a full-page text box to "The 'Gay Rights' Movement;" it's such a lovely derp-pile that we're going to save the details for next week so we can do it justice. But here's a teaser; note the tasteful pink background on the text box, which no one could complain about since those people use pink a lot themselves, the big fairies.

* If that news makes you barf, it's the ralph nadir.