Sundays With The Christianists: American History Textbooks That Leave Reality To Other People 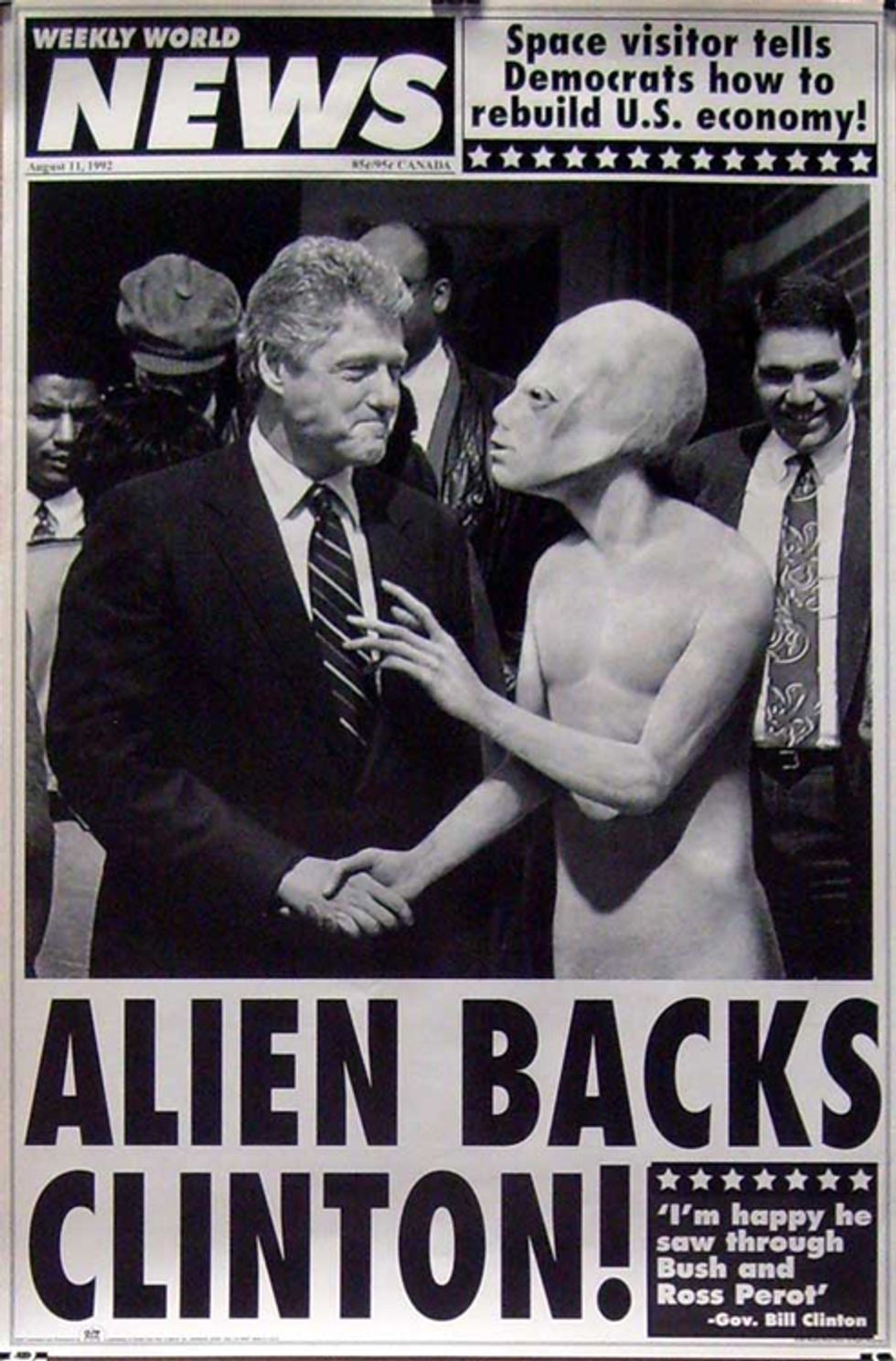 Betterfire up your modems and log into your AOL account (or Prodigy for you hipsters). Time for another look at the ruinous near-decade of prosperity under Bill Clinton, as refracted through the Truthiness Lens of rightwing Christian textbooks. This week, foreign affairs! (And next week, we'll get to the other kind.)

Our 8th-grade text from the alternative-reality mavens at Pensacola Christian College, America: Land I Love (A Beka 2006), patiently explains that Bill Clinton continued an already-disturbing "trend toward international cooperation and dependence," as evinced in the 1993 NAFTA treaty. Now watch this seamless transition from mild fretting to full-blown freakout:

The obligations that NAFTA placed on the United States concerned many Americans, but perhaps even more alarming were the efforts of the Clinton Administration to coordinate American foreign policy with the United Nations. Throughout the 1990s, U.S. troops found themselves in places like Somalia, Haiti, and Bosnia, enforcing UN mandates and often serving under UN command.

Horrors! Somehow, coordinating American foreign policy with the UN was sinister when Clinton did it, although under George H.W. Bush, it was apparently OK that the U.S. sought UN support for Desert Storm -- Land I Love had no similar qualms in that instance, and proudly noted the international opposition to Saddam Hussein.

We also learn that Bill Clinton's Middle East policy was actually dictated by the UN, which someone should probably tell him about:

The United Nations believed it could bring peace to the Middle East. Pressured by the UN and President Clinton, Israel gave the Palestinian Liberation Organization (PLO) control over the Gaza Strip, the West Bank, and Jericho in 1994. Unfortunately the violence continued between Israel and the PLO, in spite of ongoing negotiations under the sponsorship of U.S. Secretary of State Warren Christopher.

Yes, this is a textbook in which Israel acts not out of its own interests, but in response to the irresistible "pressure" of the UN and Bill Clinton.

Similarly, America's policy toward China seems to have been directed by the UN, with Bill Clinton as the middleman:

Meanwhile, the United Nations insisted on good relations with Communist China, despite human rights violations. Foreign policy experts predicted that China would become one of the greatest world powers in the 21st century. Thus, President Clinton continued to grant China Most Favored Nation trading status, claiming that America needed to trade with the Chinese in order to remain a world economic power.

That silly Bill Clinton! Why didn't he recognize that the real economic superpower and only legitimate government of China was the brave anticommunist resistance in Taiwan! If only he'd ignored those so-called experts, we could have kept the ChiComs at bay. And maybe recaptured Qemoy and Matsu. Just to drag in one more rightwing fantasy, Land I Love also chides Clinton for reestablishing

diplomatic and economic relations with communist Vietnam, even though the Vietnamese government refused to adequately account for American prisoners of war and those missing in action.

Yes, a textbook published in 2006 (though largely unrevised since 1994) still hints that Rambo was a documentary and that Vietnam was probably holding American POWs in secret camps.

Our 11/12th-grade text, United States History for Christian Schools (Bob Jones University Press, 2001), is more connected to reality, and consequently a bit boring; unlike Land I Love, it actually includes a fairly objective and detailed account of the U.S. involvement in Somalia, Haiti, and the Balkans -- conflicts which the latest edition of Land I Love has removed altogether. The 1994 first edition of Land I Love complained, with boldface, that in the Balkans, "for the first time in American history, American troops were placed under the command of a foreigner in a United Nations world army." -- it's one of the few cuts we've found between the first and second editions. The 2006 text also removed a paragraph on the "Black Hawk Down" incident in Somalia as well as a wildly inaccurate discussion of the 1994 U.S. operation to restore President Jean-Bertrand Aristide in Haiti, which somehow manages to never mention the man's name, that he was ousted in a coup, or that the Clinton administration restored him to power. Instead, it tells us only that "many Haitians fled their homeland" and that while refugees fleeing political persecution were welcome to stay in the U.S., most of the Haitians merely "wanted to escape a life of poverty" and since most were "unskilled workers, they would end up living on welfare in America." And then there's this, which we suppose was just so completely wrong that, rather than rewriting it, the editors figured they'd just flush altogether:

In 1994, President Clinton sent American troops to Haiti, but the troops never went on shore. The President backed down when the Haitian military threatened to resist American forces. Many world leaders expressed disappointment in President Clinton’s unpredictable foreign policy.

Again, no mention of why the troops went, and in reality, it was the Haitian coup leaders who backed down and allowed the elected government to return. And the U.S. troops who served as peacekeepers in Haiti would certainly be surprised to learn that a textbook insisted they "never went ashore." Maybe if they didn't go in as part of an invasion it didn't count. We wonder if the publishers ever sent a "never mind" letter to schools and homeschoolers using this text.

U.S. History manages to get Haiti right, and actually presents an accurate, detailed discussion of the Balkan conflict, acknowledging that "fifty years of cruel Communist oppression after World War II had, at least, kept relative peace in the region." No freakouts over blue helmets in this book, so we're left with merely accurate history. For the weird, we'll need to return to Land I Love.

Fortunately, the editors of Land I Love are happy to provide. In a section on terrorism in the '90s, we learn that "Muslim terrorists" set off a truck bomb in the basement parking garage of the World Trade Center in 1993, and that the Oklahoma City bombing in 1995 killed 168 people. Strangely, the only thing we learn about the perpetrator is that "the FBI arrested an American veteran named Timothy McVeigh" -- nothing at all about his motives or ideology, nothing about the antigovernment militia movement. (Bizarrely, U.S. History, published in 2001, doesn't mention the OKC bombing at all.)

Finally, then there's our favorite lie by omission, Land I Love's discussion of the Olympic Park bombing:

in July 1996, as Americans were celebrating the 100th anniversary of the Olympics, a bomb exploded in Atlanta’s Centennial Park, killing 1 woman and injuring 111 people. Authorities later arrested an American radical who was wanted in connection with several other bombing incidents.

Gosh, what motivated that radical terrorist, Eric Rudolph? You'd think that Land I Love would want to tell us that he bombed abortion clinics and a gay bar, and that he saw himself as fighting against international socialism. Strange that they don't embrace him, or at least explain that good Christian boys and girls don't set off bombs, not even against evil abortionists.

Next Week: Impeachment, finally. How do Christian textbooks discuss a sex scandal without discussing sex?