Sundays With The Christianists: American History Textbooks Where Mistakes Were Made 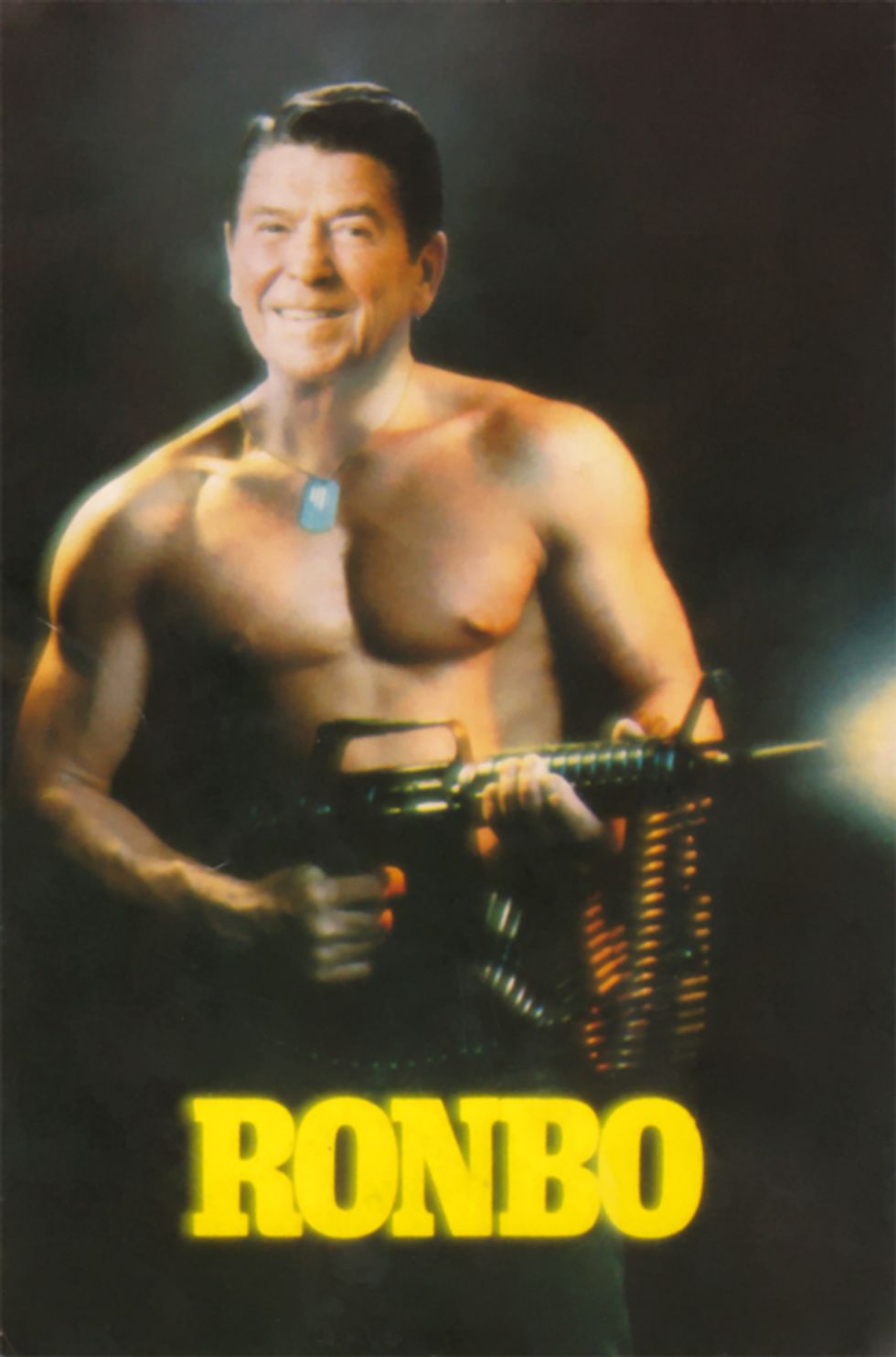 This week we'll start wrapping up the Glorious Reagan Years, in which the Gipper personally defeated Communism almost everywhere by Standing Tall and being the manliest. And for a change, on the topic of Afghanistan at least, it's our 11/12th-grade history textbook from Bob Jones University Press,United States History for Christian Schools (2002), that manages to tell bigger lies than our text for 8th graders, America: Land I Love (A Beka, 2006). Way to go Bob Jones U! We knew you could do it!

Afghanistan almost doesn't merit a mention in Land I Love, for that matter -- we learned in the section on the Carter presidency that the USSR invaded Afghanistan because by 1980, America had sunk to a "historic low" in its ability to "defend freedom," and then in its Reagan chapter, the book sandwiches Afghanistan into a discussion of the Soviets' shootdown of Korean Airlines Flight 007 in 1983. After the KAL incident, we're told,

President Reagan announced further defense buildups to combat the Communist threat. Soon American weapons were shipped to Afghanistan* to help the freedom fighters there resist Soviet forces. The tide of battle turned against the Communists as Afghan freedom fighters began to use American high-tech weapons. Stinger missiles supplied by the CIA virtually destroyed the Soviet’s fleet of combat helicopters.

And Afghanistan was never a problem again!

U.S. History is more thrilled by the Afghanistan action, calling the Soviet actions there an "ongoing genocide" and stating dubious atrocity stories as absolute facts:

Besides mass bombings, executions, and the use of a chemical weapon known as Yellow Rain, the ruthless Red Anny left toy trucks strewn in villages. The toys, however, were actually booby traps left not for the purpose of killing children -- only of blowing their hands off so that they might be a continuing burden on a society already writhing beneath the Soviet boot.

The "Yellow Rain" allegation originally concerned an accusation that the USSR was providing chemical weapons to Vietnam and Laos for use against insurgents, and Alexander Haig also claimed that the Soviet forces in Afghanistan were using it directly. Or maybe there were no chemical weapons, and the "yellow rain" was just bee shit -- the investigations were inconclusive. But at Bob Jones U, it's definitely an atrocity. Same with the "toy mines" story -- it was widely rumored, but you won't find any examples of a defused child-maiming toy truck mine in a museum anywhere. Now, there was an actual air-dropped Soviet antipersonnel mine, the PFM-1, that looked like a big green winged hunk of plastic, and probably did cause lots of casualties among curious children who found them -- but that doesn't make nearly as good a story as the notion that Evil Communists plotted to maim children with exploding toys. Fortunately, once America armed the mujahedeen with those Stinger missiles and other great weapons, everything was better:

American support combined with determined rebel resistance dealt a stunning blow to Moscow’s troops. After ten years the Soviet army withdrew in the spring of 1989, leaving Afghanistan bloodied and battered. Yet the humiliating Soviet defeat was the first in a generation, and it marked a great triumph for the Reagan Doctrine.

And Afghanistan was never a problem again!

The books get back to their usual balance when it comes to Iran-Contra, with Land I Love uncritically supportive of the Reagan myth and U.S. History friendly but still willing to acknowledge that things looked bad, maybe. Land I Love is in straightforward excuse-making mode:

in 1986, a group of terrorists supported by Iran seized six Americans in Lebanon and held them hostage. President Reagan agreed to sell some arms to the Iranians if they would help release the hostages, and the Central Intelligence Agency (CIA) arranged to use the proceeds (money from the sale) to support the Contra freedom fighters in Nicaragua. Meanwhile, Congress decided to negotiate a peace settlement with the Communists in Nicaragua and outlawed all help to the Contras. Still concerned about the Communist threat in Nicaragua, Colonel Oliver North and others arranged the transfer of Iranian funds to the Contras.

See, it was all just something that had to be done because Congress was soft on Communism! Also, why would the book want to mention that those arm sales to Iran were also illegal? You'll love this summary, which confuses the Congressional hearings (televised) with the criminal proceedings (not televised) and suggests that Oliver North was the only person involved in the scheme:

The Iran-Contra hearings in 1987 investigated these events. The Congressional investigating committee said that North had violated the law, but later court trials failed to convict him. Millions of Americans watched the Iran-Contra trials [sic] on television. Many believed Colonel North to be a patriotic American who stood up to Communism when Congress refused to do so. Others felt that North was a lawbreaker.

Opinions vary. And North was definitely an innocent man, not the lucky recipient of Congressional immunity from prosecution.

U.S. History, by contrast, offers a pretty factual summary of what happened, at least in outline form:

As the stunning story unfolded, it was revealed that members of the White House National Security Council (NSC) -- principally the NSC chief John Poindexter, his aide U.S. Marine Lt. Col. Oliver North, and Central Intelligence Agency director William Casey -- had set up secret arms sales to Iran. At the time Iran was locked in a costly war with neighboring Iraq and in need of missiles and military spare parts. Because of strategic interests in Iran, the covert operation was aimed at cultivating a moderate successor to the aging Ayatollah Khomeini. In addition, it was hoped that the arms deal would encourage Iran to help gain the release of American hostages in Lebanon held by terrorists loyal to Khomeini.

Again, no mention here of the fact that the U.S. had an embargo in place against selling arms to Iran, and of course Reagan was merely acting to help the hostages because He Cared. The plot thickens, and the bad guys turn out to be Democrats in Congress:

Investigations as to what happened to the money from the arms sales thickened the plot even more. The money, funneled through Swiss banks, was used to supply the Nicaraguan Contras battling the Communist Sandinistas, giving the whole matter the name Iran-Contra affair. The support came at a time when Congress had cut off military aid to the Contras, under the provisions of a law known as the Boland Amendment. The Reagan White House was already embarrassed over the disclosures of the Iranian arms sales, essentially an attempt to pay ransom to kidnappers, contrary to long-stated policy. Now the administration faced a Democratic-controlled Congress eager to pin criminal charges on the president’s men for supplying funds to the Contras. Reagan distanced himself from his subordinates, but the whole matter raised questions about Reagan’s management of the White House.

Golly, that sure seems mean-spirited of the Democrats, to try to find something illegal in a scheme that broke a bunch of laws. And no, there's no mention of the late-night document shredding parties or Fawn Hall smuggling documents out of the White House in her underthings. Ultimately, says U.S. History, Iran-Contra wasn't so much about an Administration acting outside the law as it was just a little jurisdictional dust-up. After all, they meant well, and, say the editors who continually insisted that Christians are held to absolute standards of right and wrong, this was all just a matter of perspective:

Throughout 1987 investigations and congressional hearings dragged out details of the Iran-Contra affair. The White House insisted that the Boland Amendment did not apply to the president’s National Security Council. Congressional investigators disagreed. Eventually North and Poindexter were brought to trial and convicted on some lesser criminal charges. When the dust of dispute had settled, however, North’s indictments were overturned on appeal in 1990. The court ruling signaled that the Iran-Contra affair was essentially another chapter in the long-running political dispute between the president and Congress over control of foreign policy, rather than a criminal conspiracy.

Stuff happened, a few "laws" were ignored, but ultimately, who can say? It's not like there was a whole secret alternate foreign policy apparatus running from the White House basement without any Congressional oversight, after all. Okay, so it was exactly like that, but North's conviction was overturned, so we know he was in the right. Hey, did you see this awesome picture of Ronald Reagan, a flag, and a bald eagle? Ollie North for President!

Next Week: Reagan yells at the Berlin Wall, and the USSR collapses.

*along with this entire blog, no one has lost any.