Sundays With The Christianists: U.S. History Books That Won In Vietnam 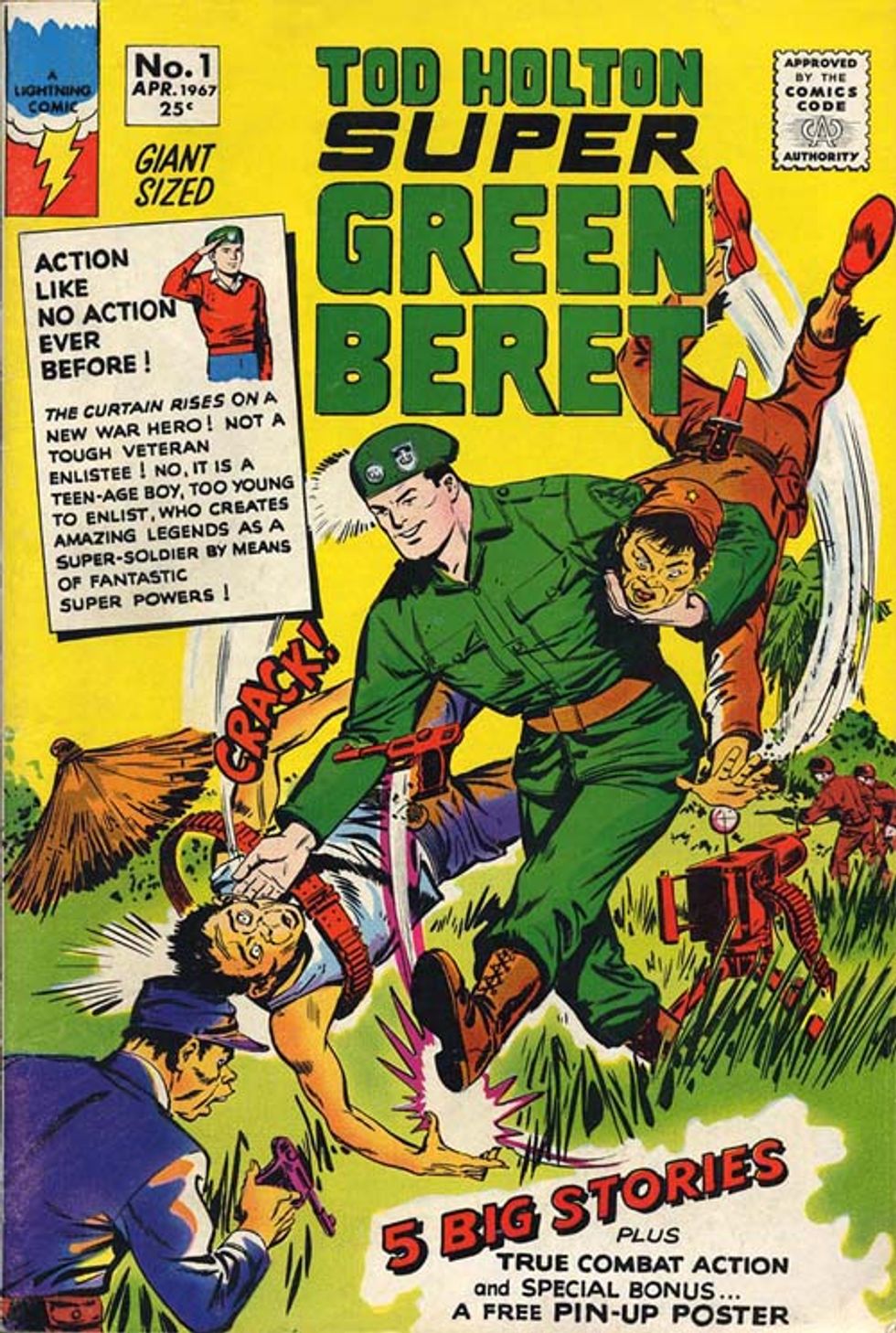 I wanted a continuing series, and for my sins, they gave me one.

You'll never guess what fun topic we're going to address this week, kids! That's right: The years of Mitt Romney's mission in France! We'll learn all about how the Vietnam War was a just and important fight to save Southeast Asia from being crushed by dominoes, and why things happened as they did -- or as Donald Rumsfeld recently analyzed the war with characteristic depth, "Some things work out, some things don't, that didn't."

With typical clarity of purpose, our 8th-grade textbook, America: Land I Love (A Beka, 1994, 2006), explains exactly why America had to fight in Vietnam:

Concerned Americans believed in the domino theory of Communism in the poorer areas of the world. President Eisenhower had first used this term while referring to Southeast Asia. He said all of the countries there were like a row of standing dominoes. South Vietnam was the first domino, and the Communists were trying to knock it over. lf South Vietnam fell, all of the others -- Cambodia, Laos, Thailand, Burma, Indonesia -- would fall, too. Lesser developed nations were especially vulnerable to Communism. Foreign policy planners began to refer to the poorest nations as the "Third World."

Eisenhower believed it, and it must have been so. Also the third world (no, they don't explain the term). Strangely, Land I Love makes no mention of how, following the fall of South Vietnam, all those other countries turned communist as well.

Our other text, the 11/12th-grade United States History for Christian Schools (Bob Jones University Press, 2001), is a little less absolute about all this; it devotes space to the initial involvement in Vietnam in the '50s and early '60s in fairly objective terms, and described the shift in American troops' role from "advisors" to combatants with this up-to-date metaphor:

Ostensibly the troops were there to train the South Vietnamese army and to protect American personnel. However, the situation in Asia, as one historian has noted, was proving to be like a "tar baby": the more the United States tried to free itself, the more entangled it became.

Surprisingly, considering its tendency to be the less frothing-mad of the two texts, U.S. Historyhas no doubt about the reality of the event that led to the expansion of the U.S. role:

In the midsummer of 1964 the American destroyer Maddox repulsed an attack by North Vietnamese patrol boats in the Gulf of Tonkin. Although the affair was relatively minor, Johnson denounced this attack on an American vessel and asked Congress to pass a joint resolution giving him authority to respond to Communist aggression in Vietnam.

Land I Love at least calls it an "alleged" attack, but in its eagerness to justify the fight against atrocity-committing communists, weirdly suggests that it came after American soldiers were in frequent combat:

Communist guerrillas, called Viet Cong, terrorized innocent South Vietnamese villagers, forcing men, women, and children to help them. The Viet Cong sometimes equipped little children with explosives and sent them on suicide missions against unsuspecting American soldiers who had come to liberate the villages. In 1964, the North Vietnamese navy allegedly attacked American ships in the Gulf of Tonkin.

Apart from that Gulf of Tonkin slip, U.S. History presents a pretty fair discussion of the Vietnam conflict, noting that it was "not a clear-cut conflict between two separate nations, as the Korean War had been. Americans were fighting both the North Vietnamese and pro-Communist South Vietnamese (called the Viet Cong)." U.S. History even notes that the South Vietnamese government, while non-Communist, "was corrupt, undemocratic, and unstable. The only advantage it offered to Americans was that it was 'better than the Communists.'" We're wondering if Bob Jones University has investigated the loyalty of whoever wrote that -- nothing of the sort appears in Land I Love.

And then there's the whole "limited war" strategy; U.S. History suggests that it was not a simple decision:

Johnson was committed to the idea of a limited, defensive war. He did not want to risk an outright war against North Vietnam -- a war which might draw in the Soviet Union or Communist China, divert dollars from the Great Society at home, and prove politically damaging.

Land I Love knows, of course, that the real purpose of teaching history is to tell children who the good guys and bad guys were:

President Johnson wanted to fight the Communists in South Vietnam, but Congress refused to allow American forces to take the offensive and invade Communist North Vietnam. Congress opposed a clear military victory and the President himself wavered in his commitment because he did not want military spending to interfere with social welfare programs.

Under President Johnson, the United States sent some 500,000 American soldiers to South Vietnam to defend freedom in a no-win conflict known as the Vietnam War. These men fought bravely but they were not allowed to win. Conservative Americans felt that if the military had been allowed to fight the war as it should have been fought, fewer people would have been killed and Communism would have been defeated in that part of the world.

Land I Love is not quite as certain about how the war "should have been fought," but it knows for sure that we should have won, because we're America.

To its credit, U.S. History includes this lovely cynical comment from an unidentified girl in the early days of the campus protest movement: "I was told if I voted for Goldwater we would be at war in six months. I did -- and we were." It even acknowledges that the Johnson administration was deceptive about he progress of the war:

President Johnson feared that if Americans knew how deeply committed the United States was to the war and how it was actually going, they would stop supporting the programs of the Great Society. Therefore, he attempted to disguise the number of U.S. troops involved in the conflict and to cover setbacks. All that the American people generally heard were cheery, optimistic reports of how well the war was going.

U.S. History even blames Johnson's deceptions -- partly -- for the public response to the 1968 Tet Offensive, noting that after the Viet Cong's initially successful assault on targets all over South Vietnam, U.S. and South Vietnamese troops eventually "drove back the enemy, recapturing what had been lost and inflicting massive casualties":

Militarily, the Tet Offensive was a failure for the Communists, but it had a dramatic effect on the American public. Television newscasts emphasized the negative aspects — the suddenness of the attack and the heavy losses -- thus leading many Americans to believe that Tet was a Communist victory. The U.S. government, to some extent, reaped what it had sown. Having misled the American people and media about the course of the war, the government now faced the wrath of a public who wanted to know how things could come so close to disaster so suddenly. After Tet, many Americans were seemingly no longer looking to win the war; they only wanted a way out.

That's really not much different from Kid Zoom's secular textbook, The American Pageant, which says the Tet offensive "ended in a military defeat but a political victory for the Viet Cong."

Happily, we have Land I Love to infuse a much-needed taste of Pure Wingnut Bullshit:

The Tet Offensive. Congress’s refusal to allow the American military to take an offensive position and fight to win was exposed in early 1968 when the Viet Cong began a series of devastating battles known as the Tet Offensive. As American and South Vietnamese troops suffered heavy casualties, it became clear that unless Congress allowed the troops to invade North Vietnam, Laos, and Cambodia and wipe out the Communist guerrillas and their war factories, the Vietnam conflict would never end.

Land I Love is so busy with the "what we shoulda done" to even note that the Tet offensive didn't succeed in holding any significant territory -- so yep, that really was some political victory for the Viet Cong; it even convinced rightwing textbook editors that all was lost.

We'll let Land I Love have the last word this week, because it's just so brilliantly paranoid, right down to the paragraph heading:

Betrayals all around. Although Congress refused to allow the needed military action, American and South Vietnamese forces managed to hold the Communists back. But Communist troops from North Vietnam continued to pour into the South, and European countries who sympathized with the Communists continued to supply North Vietnam with food and medical supplies. Some conservatives felt that Communist sympathizers in high-ranking government positions were deliberately hindering the U.S. military’s ability to achieve a victory in Vietnam.

Yes, this Christian textbook just complained that North Vietnamese were allowed to eat and get medical supplies. And of course, we never find out who those high-ranking traitors were, with all their back-stabbing, but they were almost certainly there.

Next Week: We'll wrap up Vietnam and look at the dangerous radicals in the "peace" movement; take a wild guess which textbook makes no mention at all of My Lai, the Pentagon Papers, or Kent State? Hint: It's the one that's sure America was betrayed.