Sundays With The Christianists: Why 'Huckleberry Finn' Is Eeeevil (Not The Reasons You Thought!) 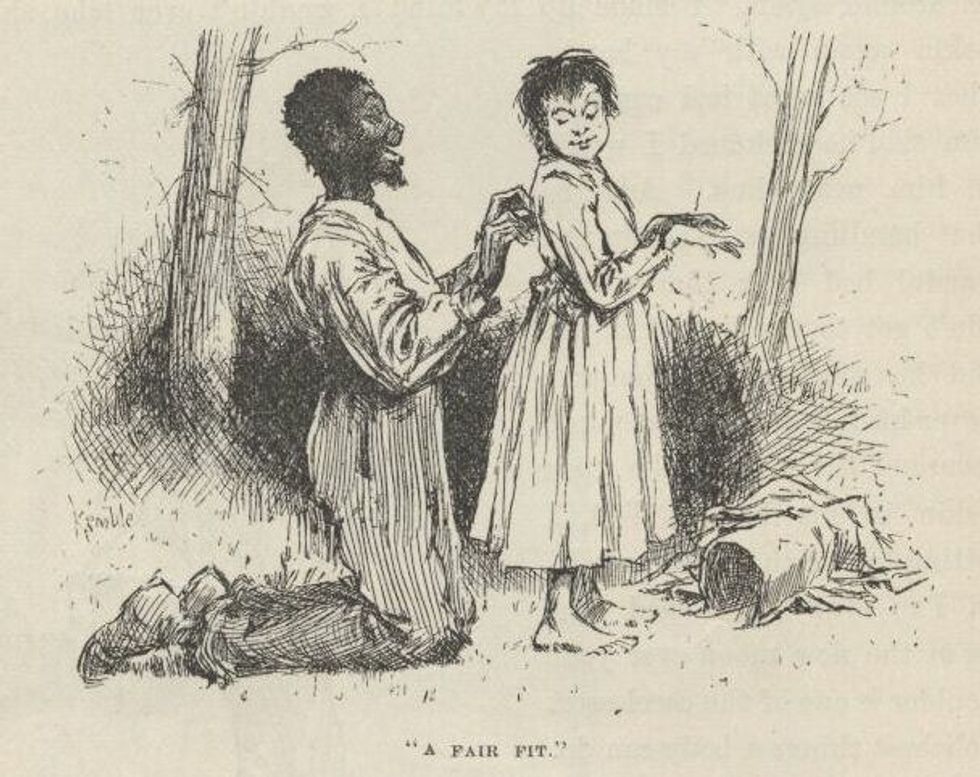 We've decided that we're actually rather grateful to wingnut radio preacher Kevin Swanson for writing his bizarre e-screed Apostate: The Men Who Destroyed the Christian West, which makes the case that American and European civilization have been ruined by all of our philosophy and literature. We'd be much better off, Swanson suggests, if we lived like the Puritans, only maybe with the internet so Kevin Swanson could do his podcast and sell ebooks. Why are we grateful to Kevin Swanson? Because his awful little book's awful chapter on Mark Twain finally reminded us to pick up a terrific biography of Twain's later life, Mark Shelden's Mark Twain: Man in White: The Grand Adventure of His Final Years. It's a heck of a fine book that had been sitting on our shelf just waiting for us to get to it, and it's a fine reality-based counterpoint to Swanson's caricature of Twain.

Shelden also is a useful corrective to a stereotype about Twain that we may have contributed to somewhat last week, the notion that, late in life, Sam Clemens was nothing but a bitter old cynic, turned mean by the series of tragic losses he experienced near the turn of the century: his bankruptcy in 1894, the death of his daughter Susy in 1896, and the loss of his beloved wife Livy in 1904. [contextly_sidebar id="OSle5nFwVqBOZGXmWkwbhWGutMgtrNWj"]

While those events certainly reinforced Twain's conviction that God is either a myth or a complete bastard, he was certainly no fan of conventional theology earlier in life, either; as commenter motmelere pointed out last week, Twain had plenty of fun tweaking Christian moral lessons in a hilarious pair of 1875 stories about the "Good Little Boy" and the "Bad Little Boy," in which rotten little jerks have all the fun, and boys who try to live according to the pleasant fictions of Sunday-school books crash face-first into cruel realities:

[O]nce, when some bad boys pushed a blind man over in the mud, and Jacob ran to help him up and receive his blessing, the blind man did not give him any blessing at all, but whacked him over the head with his stick and said he would like to catch him shoving him again, and then pretending to help him up. This was not in accordance with any of the books. Jacob looked them all over to see.

Sadly, Swanson doesn't mention either of these stories; instead, he gets right into the Big Blasphemies, and he's pretty sure that Twain had some demonic help:

In 1909, only a year before he died, he transcribed what he called a message from Satan himself entitled Letters from the Earth. He fully understood the extent to which these writings would sully his public image should they be published. Concerning Letters, Twain told his friend, Elizabeth Wallace, “This book will never be published. In fact it couldn’t be because it would be a felony.”

As it happens, Swanson's source for that quote is Shelden's Man in White, so we'll at least give him credit for having done some research. When it comes to Letters From the Earth, Swanson doesn't have to exaggerate in describing its contents:

In these letters from Satan to the archangels, Mark Twain held nothing back. Among other assorted blasphemies, he referred to the Bible as a compendium of “blood-drenched history. . . and a wealth of obscenity; and upwards of a thousand lies.” The book is self-consciously evil. The immoral, the irreverent, the blasphemous, or demonic — it is all fair game in this hell-forged tome. He even exhorted women to “the high privileges of unlimited adultery.” Harper and Brothers tried to publish the work in 1939, but the project was nixed by Twain’s daughter Clara. Finally, the book was printed and released in 1962. By this time, the sexual revolution was in full swing, and Mark Twain’s brave, progressive views were well in step with the wider culture. Without question, he was a powerful influence and pioneer for the anti-Christian, anti-morality, anti-family agenda that dominates our world today.

Frankly, we can't think of anything that would please Twain more than to know that, a century after his death, some Bible-thumper would be giving him credit for the 1960s. But not full credit, of course, because Swanson is convinced that Twain, like Hawthorne, had some demonic help in writing his blasphemies:

While exaggerating the power of Satan and rendering him omnipotence [sic] is antithetical to a Christian worldview, it would also be dangerous to minimize his power. If Christians do not recognize the work of Satan in men like Mark Twain, they will most likely be deceived by men...like Mark Twain. As Christians, we are not frightened, but we must take the evil words and works of an evil man seriously. If God takes it seriously, and if God’s judgment will take it seriously, then we must take it seriously.

As an aside, Swanson also notes that Twain "supported the communist Nikolai Tchaikovsky" and the "Russian communist revolutions," and while he's at it, suggests that Twain "would have been pleased" with the millions killed by communists in the 20th Century, because of course he would have. Never mind that Twain died in 1910 and Tchaikovsky opposed the Bolsheviks who eventually won in Russia. For Swanson, who is careful to explain doctrinal trivia that exonerates Christianity from the taint of association with witch trials and genocide, distinctions between the ideologies of 19th century socialists are much easier to elide, because all socialism ultimately leads to Stalin. But perhaps we quibble, and Twain would have found Pol Pot a swell guy.

In any case, the alleged real focus of the chapter is an analysis of The Adventures of Huckleberry Finn, and why it's an even more dangerous book than The Scarlet Letter, and not merely because it involves cross-dressing, lying, and deciding to go to hell. No, the biggest problem with Huckleberry Finn, Swanson admits, is that it's a terribly fun book, and Mark Twain is a skilled writer full of evil ideas:

Mark Twain takes advantage of the uncritical mind and the biblically illiterate Christian. He knows how to construct complex ethical scenarios in order to tie the unwary Christian reader up in knots. The main character in the story, Huckleberry Finn, is presented as the likable, footloose and free, practical-minded American who is confused and turned off by the “Christian” caricatures he meets along the way. Virtually all of the characters in the story have their roots half buried in 1,500 years of Western Christianity. Even the hucksters know enough Christianity to hold a revival service. However, all of the Christians are presented in varying shades of hypocrisy and ignorance so that by the end of the tale, the reader is left with a thoroughly negative impression of the Christian faith.

Worst of all, Twain depicts his Southern Christians as somehow having been supportive of slavery, which Swanson believes unfairly stacks the deck against them. Fortunately, Swanson is ready for Twain's unfair connection of southern Christians with slavery, and he spends multiple pages explaining why Christianity gets a free pass when it comes to American chattel slavery: You see, the kind of slavery practiced in the Bible is nothing like the evil institution in the American South, and so only bad Christians would have used the Bible to justify that system. So yes, Swanson condemns slavery as an evil thing -- and then he explains that American slavery was nothing like the biblical version, so our nation's Original Sin conveniently becomes just one more example of America's apostasy from biblical values.

This is quite possibly the most deeply weird section of Swanson's book, so we're going to have to tackle it next week to give it the mocking it deserves. As a teaser, try chewing on Swanson's unique theological perspective on the Civil War:

When the Northern Unitarians won the war against the Southern Presbyterians and Baptists, the more “conservative” Southern churches were regarded as having taken the “lower moral ground.” The progressive humanists won the propaganda war in the 19th century, and they took advantage of an American public that was unwilling to think critically and biblically about these issues.

Yes, you read that right: the Civil War was mostly a clash between Unitarians in the North and Baptists and Presbyterians in the South. That's a new one for us. We're honestly unsure whether Swanson thinks that the entire Union army consisted of Bostonians from Beacon Hill, or if he's saying that all those Catholics, Lutherans, Methodists, Congregationalists, and yes, Baptists in the North were simply so infected with loose doctrine that they might as well have been Unitarians. And then after the Baptists and Presbyterians lost to this massive Unitarian onslaught, the victorious Unitarians went and rewrote history to portray Southern Christians as supportive of slavery. Presumably after coffee and a nice lentil stew.

And yes, Swanson admits, "Some of the Southern churches had tolerated slavery and attempted a biblical defense for it," but don't you see, these churches (some of them, you mind, as if most Southern institutions weren't entirely geared toward preserving slavery) were wrong, because they simply didn't understand what biblical slavery was. Just as the New England Puritans did witch trials the wrong way, it turns out that American slavery was totally different from the biblical kind, and so Twain was wrong to attack Christians for supporting slavery.

Darn that Mark Twain -- he had such a skewed view of reality.