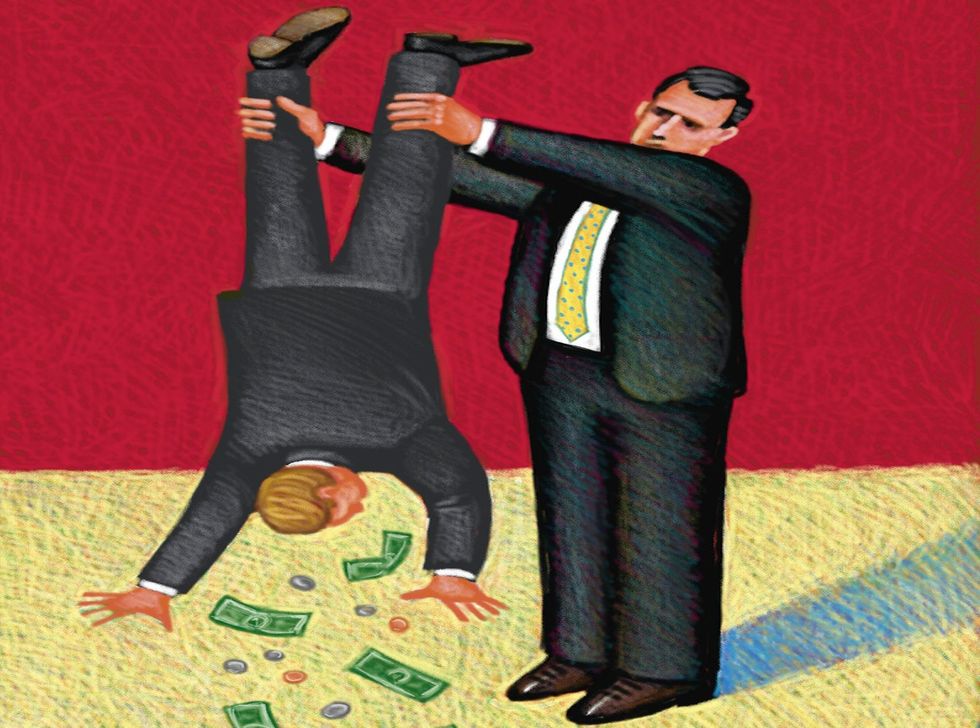 OMG! Jeff Sessions was totally right! Smoking that jazz cabbage does turn you into a worthless slacker! To be fair, in the noble struggle to confiscate money from people too weak to put up a fight, Colorado was always kind of a lightweight -- it's no Texas or Oklahoma! But if your legislature can't even pass a cash grab that passes muster with Samuel Alito, you hippies need to ease off that migraine medicine for a minute. It's like Colorado's heart isn't even in stealing from poors any more. Sad!

Nelson v. Colorado: It's Not Stealing If You're The Government

Prior to 2013, an exonerated defendant could easily get back any fines or fees by asking the trial judge to order a refund. Say Dustin was convicted of shoplifting two bars of Sex Wax from the King Soopers, but his conviction was overturned on appeal. The judge ordered the state to return the $128 in court costs, and Dustin was back on his board that afternoon. It's all good!

But then Colorado passed the Exoneration Protection Act, allowing defendants to sue the state for wages lost during the period of wrongful imprisonment if their convictions are overturned. Which is very chill! But the law also says that if Dustin wants his $128 back, he has to hire a lawyer and file a civil lawsuit to prove his innocence. So Dustin is shit out of luck, because he's not shelling out thousands of dollars in legal fees to get a refund of $128. Harsh!

DO NOT Pee on Justice Ginsburg's Leg and Tell Her It's Raining!

In Nelson v. Colorado, decided 7-1 by the Supreme Court last week, Colorado made two arguments to justify hanging on to Dustin's cash. First, they said that the money was magically transformed into state property when seized. It's not Dustin's money! It's "PUBLIC FUNDS." Justice Ginsburg was not having it: "Colorado has no interest in withholding from [Defendants] money to which the State currently has zero claim of right." So much for that mountain magic.

Colorado also tried to argue that defendants who escaped prosecution based on technicalities are not "innocent," and thus shouldn't be able to get their money back. But Notorious RBG knows a shakedown scheme when she sees one!

Colorado may not retain funds taken from [Defendants] solely because of their now-invalidated convictions [...] for Colorado may not presume a person, adjudged guilty of no crime, nonetheless guilty enough for monetary exactions.

Guess which Justice thinks it's just fine for Colorado to keep PUBLIC FUNDS collected at a trial? In fact, why should the state even have to return them under any circumstances?

In the absence of any property right under state law (apart from the right provided by the Exoneration Act, which petitioners decline to invoke), Colorado’s refusal to return the money is not a “depriv[ation]” of “property” within the meaning of the Fourteenth Amendment. Colorado is therefore not required to provide any process at all for the return of that money.

Did you guess Clarence Thomas? Well done! You sure do know your fascist justices!

Sadly, the exonerated defendants in Colorado were not a couple of lovable burnout snowboarders. They were actually convicted of sex crimes against children and later exonerated on procedural grounds. BUT THAT IS NOT THE POINT. Seven justices just agreed that Colorado violated due process and property rights by saying, "We're keeping your money. If you don't like it, SUE US." So, if Colorado can't do that, maybe Texas can't either?????

This system—where police can seize property with limited judicial oversight and retain it for their own use — has led to egregious and well-chronicled abuses. [...]

These forfeiture operations frequently target the poor and other groups least able to defend their interests in forfeiture proceedings. [...] Perversely, these same groups are often the most burdened by forfeiture. They are more likely to use cash than alternative forms of payment, like credit cards, which may be less susceptible to forfeiture. And they are more likely to suffer in their daily lives while they litigate for the return of a critical item of property, such as a car or a home.

Wait, Justice Thomas thinks we really need to take a look at civil asset forfeitures because they violate due process? Who saw that one coming?

So maybe slapping down Colorado's cash grab is just the beginning? Because, as government shakedown schemes go, Colorado's is basically all seeds and stems.

And can it really be NICETIMES at the Supreme Court this week? Yes, yes it can! But only for a second, so enjoy it now before Justice Gorsuch gets down to blessing whatever crazy shit Jeff Sessions can dream up to screw browns and women.

We actually found a happy story about the Supreme Court! That has to be worth a dollar, right?